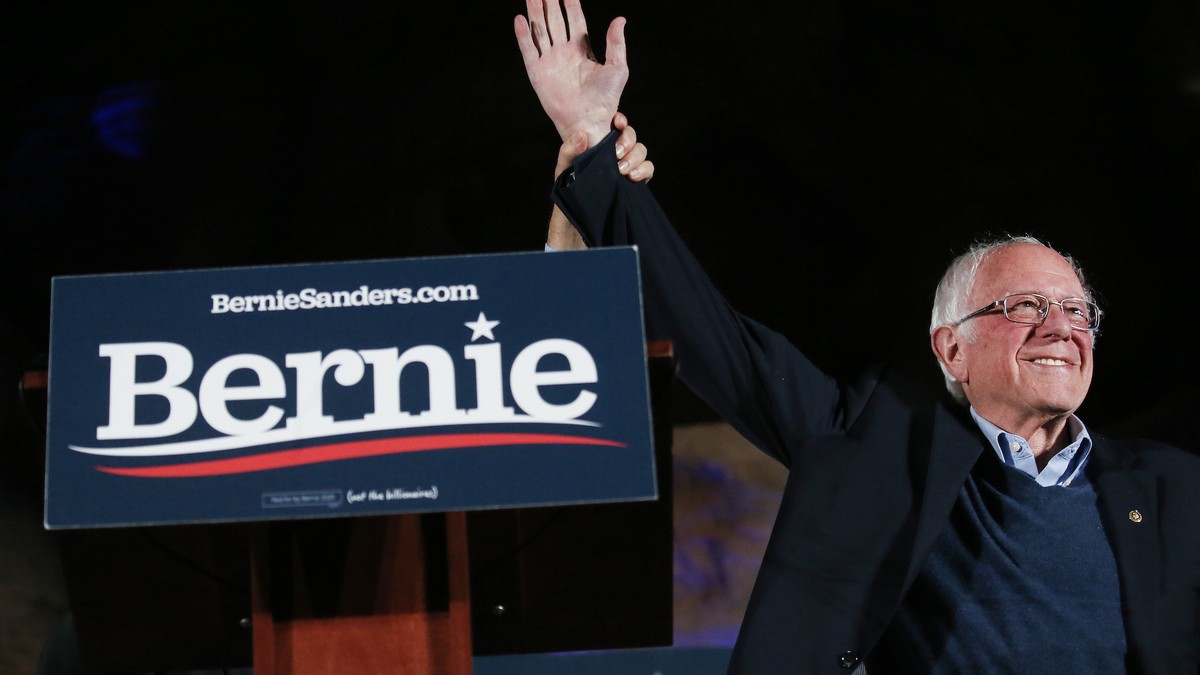 LAS VEGAS — Bernie Sanders seemed to be enjoying himself as he made his final pitch in Nevada ahead of Saturday’s caucuses.

“As you may have noticed lately, the establishment is getting a little bit nervous,” he said to cheers at his Friday night rally before mimicking the hand-wringing Democrats panicking over his rise.

“‘Oh my god, they’re putting together a multi-generational, multi-racial movement of millions of millions of people! Oh my goodness, how can we stop them?’” he continued as his thousands-strong crowd laughed. “They’re getting nervous. But you know what? When we stand up together, they ain’t going to stop us.”

Sanders appears to be cruising to an easy win in Nevada’s Saturday caucuses, buoyed by a fractured field of middling candidates struggling to break out against him.

He’s had a comfortable lead in most recent polls. He’s drawing the largest crowds — the official crowd count from the venue staff Friday night was, no joke, 2,020 attendees, not his biggest crowd this week but a number one Sanders supporter called an “omen” as he left the event.

He showed so much confidence in his standing in the state that broke away to campaign in Washington and California in the week ahead of the caucuses.

Rival campaigns admit that everyone else is left fighting it out for second place, not a good position for them to be in when all of them need a strong performance to build the momentum needed to compete on Super Tuesday ten days from now.

“All signs point to a Bernie victory,” said Jon Ralston, the head of the Nevada Independent and the state’s top political analyst. “And second is such a muddle.”

While Sanders has been hovering around 30% in most recent Nevada polls, Joe Biden, Elizabeth Warren, Pete Buttigieg, Amy Klobuchar and Tom Steyer have all been bunched up in the teens.

READ: Elizabeth Warren is finally getting ruthless. Is it too late?

A strong second place could let one of the non-Sanders candidates claim momentum and head into South Carolina next Saturday with a bounce in their step, potentially slingshotting into Super Tuesday. And Nevada is notoriously hard to poll, so Saturday’s caucuses could produce a surprise.

But nearly everyone competing in Nevada not named Sanders is running low on resources and struggling to break out of a muddled field. A distant second place is unlikely to produce the bounce needed for anyone to break out of the pack.

In short (and since it’s Nevada), Sanders looks like he’ll be leaving Las Vegas the big winner. And the rest of the field are quickly running out of chips.

That’s especially problematic for Biden, whose lead in Nevada polls was erased by his disastrous showings in Iowa and New Hampshire. He has publicly proclaimed his comeback must start in Nevada, a state with a lot more diverse population and high union density. His once-dominant poll numbers in South Carolina have suddenly disappeared, and without a strong Nevada finish he may well lose in the state he’s described as his firewall.

But Biden’s supporters aren’t feeling so good about where things are headed.

“I’m kinda scared that it might not go as well as we’d like. But I’m hoping he gets up there, like number two. I don’t know, I’ve met a lot of Bernie people,” John Norvell, a retired factory and casino worker who is serving as a Biden precinct captain in rural Pahrump, told VICE News at Biden’s Friday afternoon Las Vegas event. “They’re all going to be scrambling for second. I don’t know how it’s going to go.”

As Biden and multiple other candidates pointed out, only 2% of delegates have been awarded. But the race is about to speed up dramatically. Once Super Tuesday is complete, fully 40% of delegates will have been doled out. And the type of positive national buzz necessary to do well in states from California to North Carolina and Texas to Massachusetts without spending tens of millions of dollars worth of ads — a sum no one in the race besides Michael Bloomberg have at their disposal — necessitates some big wins beforehand.

Many of those states have early voting, so voters are already are casting ballots. And if Sanders wins Nevada, as expected, that just leaves South Carolina in a week to score a win, and making it almost impossible for anyone else to build momentum.

Steyer has also invested heavily in Nevada, and is banking on a strong showing here to give him a chance at a South Carolina upset that could give his campaign real life. Buttigieg has a real if delayed presence in the state and hopes he can keep rolling after his New Hampshire win. Klobuchar is looking to avoid an embarrassment in the state.

But for any of them to get themselves in a position to be seriously competitive nationally for Super Tuesday, just ten days away, they’re going to need a strong Nevada showing.

The candidate with arguably the most momentum at the moment is Warren, whose evisceration of Michael Bloomberg onstage during Wednesday’s Nevada debate got rave reviews. After Sanders she has the strongest field operation in the state. If she can pull off a strong finish in Nevada, it could help resurrect her campaign.

But unluckily for her, Nevada Democrats allowed early voting for the first time in their caucuses — and nearly 75,000 people turned out, almost as much as voted in the entire 2016 caucuses. All those votes were cast before her debate performance, blunting any momentum she could have scored from the debate.

Her ardent supporters sound much like the rest of the candidates’.

“I would love to see her come in second, stay in the race, because I think at minimum she’s informing the conversation in a way that’s helpful,” Harmoni Hines, a Warren volunteer, told VICE News at Warren’s Thursday morning event. “I want it to be her [in first], but I think Sanders has it locked and loaded.”