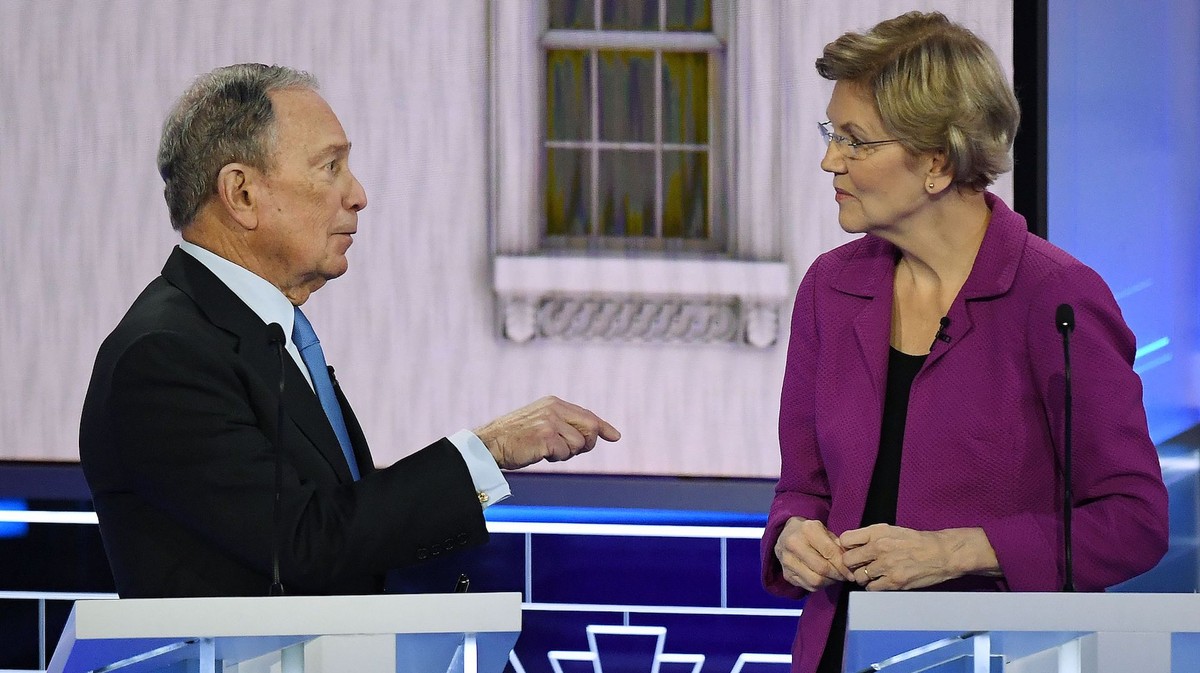 LAS VEGAS — The Bloomberg is off the rose.

The billionaire former New York City mayor had spent his way towards the front of the Democratic presidential pack, skipping the indignities of campaigning in the early states or actually facing his opponents, while deluging the national airwaves with positive spots.

But then the debate came — and the former mayor was turned into a piñata by a squad of more seasoned politicians itching to get their shot at him. Suddenly, a candidate who’d been getting buzz as the last, best hope for moderates to stop Bernie Sanders looked like a candidate adrift. And while it’s unclear how much debates will slow his rise in the polls ahead of Super Tuesday’s critical contests in two weeks, if Bloomberg is going to be the Democratic nominee, he’ll have to handle himself a lot better.

It didn’t take long for his opponents to dump the opposition research book on his head, from his controversial policing record to his comments that the end of redlining — a policy that hurt black and brown families’ ability to accumulate wealth — caused the 2008 financial crisis, to his 2004 endorsement of George W. Bush’s reelection campaign and funding of GOP candidates as recently as 2016.

Bernie Sanders used the first debate question of the night to slam Bloomberg for his “outrageous” stop-and-frisk policy. Joe Biden chimed in to say Bloomberg’s policies threw “close to 5 million young black men up against the wall” — and that he’d fought the Obama administration’s efforts to curtail the deeply divisive policy.

Amy Klobuchar followed up by hitting Bloomberg for “hiding behind his TV ads” and for his campaign’s call for her and other more moderate candidates to drop out to let him emerge against Sanders, insinuating it was sexist and arrogant.

But their attacks were nothing compared to the body blows Elizabeth Warren unleashed on Bloomberg.

She opened up the debate by slamming Bloomberg as “a billionaire who calls women fat broads and horse-faced lesbians.” Later, she pushed him into a tortured defense of why he won’t release multiple women from non-disclosure agreements they signed with his company. Bloomberg stammered through a defense, claiming the NDAs were “consensual” while refusing to say how many women had accused him or others at his company of sexual harassment.

“None of them accuse me of doing anything other than maybe they didn’t like the joke I told,” he said flippantly.

He didn’t do much better in explaining why he hadn’t released his tax returns yet.

“I can’t go to TurboTax,” he said to groans, arguing that because he was so wealthy with so many holdings he needed time to put them together.

“We’re releasing them, they’ll be out in a few weeks, and that’s just as fast as I can do it.”

“He wasn’t ready for what was coming at him,” said Jennifer Palmieri, a former adviser for President Obama and Hillary Clinton. “Debating at this level is a really hard thing to do. And he didn’t seem to enjoy it very much — and he wasn’t very good.”

READ: Bloomberg got destroyed in the first 3 minutes of the debate

Even though all the attacks gave Bloomberg plenty of chances to respond, he managed to speak for just over 13 minutes during the two-hour debate — less than any other candidate. And beyond claiming he was the most electable, he did little with the time he had, failing to lay out a positive case for why Democrats should back him to face Trump.

Even Bloomberg’s own team admitted their boss hadn’t put his best foot forward.

“Look, there’s no question that you have a lot of experience on that stage… people [who] have been doing it a long time,” Bloomberg top campaign adviser Howard Wolfson told VICE News after the debate. “I think Mike was better in the second hour than the first.”

For a man who’s sold himself as the best and only candidate ready to stand up to President Trump, his team didn’t have any issues arguing that he’s on a learning curve.

“They’ve done eight debates, this was his first,” former Los Angeles Mayor Antonio Villaraigosa (D) told VICE News. “I thought he did well, I’d like to see him jumping a little more but there were times when I could see why he didn’t.”

The debate marked a trial by fire for Bloomberg, who has faced almost no vetting in the campaign because of his late entry and refusal to compete in the first four states.

But there’s more to come. Bloomberg’s just getting vetted now, and no one even mentioned his recent description of transgender women as “some guy wearing a dress” — not to mention whatever else the media and the campaigns dig up from his extensive record in the coming days.

He can’t change his record, but he can improve his performance.

“Michael Bloomberg was unprepared for the onslaught of the issues that he was confronted with how, in terms of his personal record and his policy record,” said Rep. Joaquin Castro (D-Texas), a Warren surrogate. “You could see tonight why he’d been avoiding the debate stage. It was deer in headlights all night.”

The 5 Most Savage Moments From Last Night’s Democratic Debate