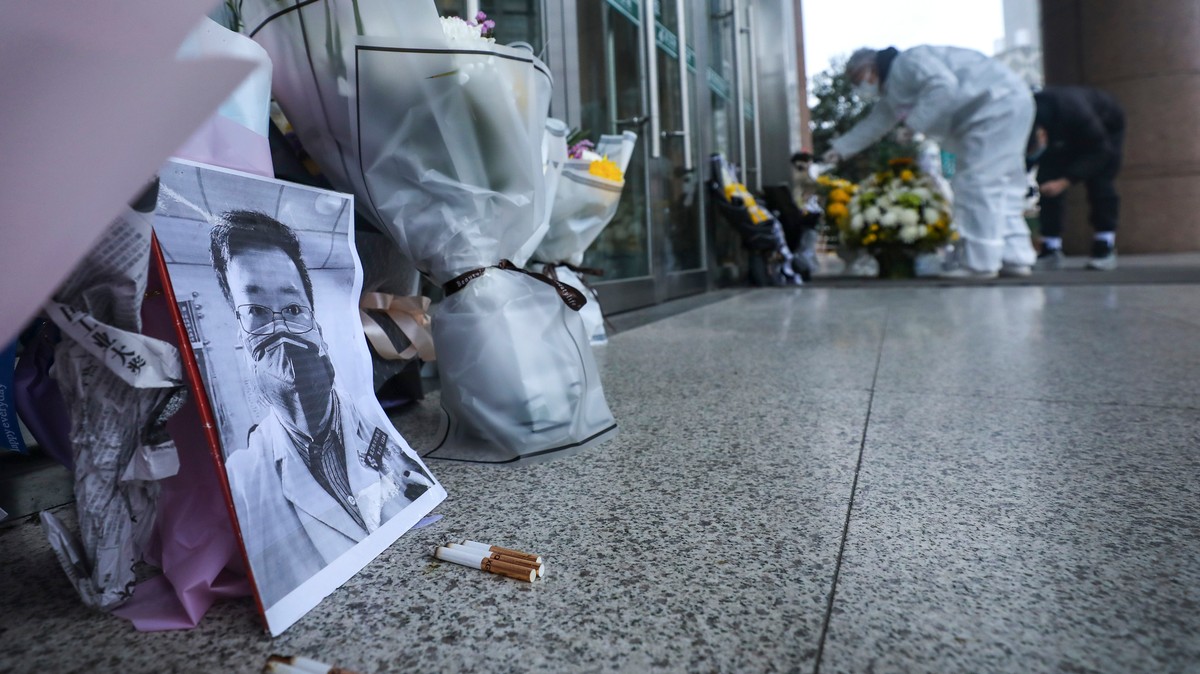 The Chinese government has attempted to eradicate an unprecedented outpouring of grief and anger following the death of Li Wenliang, the doctor who tried to warn the world about the growing threat from the coronavirus outbreak.

In the hours after Li’s death from coronavirus was confirmed Thursday, Chinese citizens staged a rare collective protest online criticizing the government and officials for failing the doctor by silencing him and ignoring the threat posed by the coronavirus, which has now killed at least 637 people in China and infected at least 31,000 more.

Mentions of Li’s death flooded WeChat and Weibo, two of China’s most popular social media sites. Messages of grief quickly gave way to anger, with the hashtags “Wuhan government owes Dr. Li Wenliang an apology” and “We want the freedom of speech” quickly trending on Weibo.

As well as directly referencing Li’s death, online critics quoted the song “Do You Hear the People Sing,” referenced Article 35 of China’s constitution that provides for freedom of speech, and shared sections of the poem “For Whom the Bell Tolls.”

But within hours, the government had wiped clean much of the anger and critical voices, part of its widespread campaign to silence any voices critical of the government’s response to the virus outbreak, particularly its delayed reaction to initial reports coming out of Wuhan in December.

The government issued censorship instructions to the media in the wake of Li’s death, warning them that “it is strictly forbidden for reports to use contributions from self-media, and sites may not use pop-up alerts, comment, or sensationalize.”

It added that outlets should “not set up special topic sections, gradually withdraw the topic from Hot Search lists, and strictly manage harmful information,” according to a leaked copy of the alert seen by China Digital Times, a California-based group that monitors China’s online space.

The government even tried to control the news of Li’s death, likely knowing the anger and outrage it would cause.

Several state-run media outlets, including the People’s Daily and the Global Times, broke the news of Li’s death at around 10:30 p.m. local time, news that was quickly picked up by international media.

However, according to screenshots posted on Weibo, the government quickly issued a “reporting instruction” to journalists to play down Li’s death. State-run media quickly deleted their stories and claimed Li was still alive but in a critical condition.

Hours later, the hospital confirmed Li had died at around 3 a.m. local time on Friday morning.

Li died from coronavirus a month after he tried to warn family and friends in a private WeChat message about a growing threat he had seen at Wuhan Central Hospital, where he worked as an ophthalmologist.

After his warning was shared online and went viral, Li was silenced by Chinese authorities and warned that if he spoke up again there would be serious consequences.

Li went back to work and a week later unknowingly treated a patient with coronavirus. He fell ill days later and was admitted to the intensive care ward.

The silencing of Li is part of a wider effort by Beijing to censor any negative comments about the coronavirus outbreak. Now, some in Wuhan are worried that another critical voice may have been silenced.

Former human rights lawyer Chen Qiushi, who became famous for his citizen journalism during the Hong Kong protests last year, has been posting videos from Wuhan detailing what life is really like in the city that is under lockdown.

Chen’s reporting has shown how taxi drivers in Wuhan knew about the outbreak as early as mid-December, and how medical staff at Wuhan’s hospitals had become infected with coronavirus, despite government claims to the contrary.

Chen’s WeChat account was suspended shortly after he arrived in Wuhan on Jan. 24, and other users were told that sharing Chen’s videos, which included trips to local hospitals and interviews with citizens angry at the government’s slow response, would result in them being banned too.

But now friends say he has not been seen or heard from since 7 p.m. local time on Thursday when he was due to visit one of the temporary hospitals established in Wuhan. His mother posted a video on Twitter calling for help locating her son.

Cover: People pay condolence in front of flowers lying near a photo of the late Dr. Li Wenliang at a hospital in Wuhan in central China’s Hubei province, Friday, Feb. 7, 2020. (Chinatopix via AP)