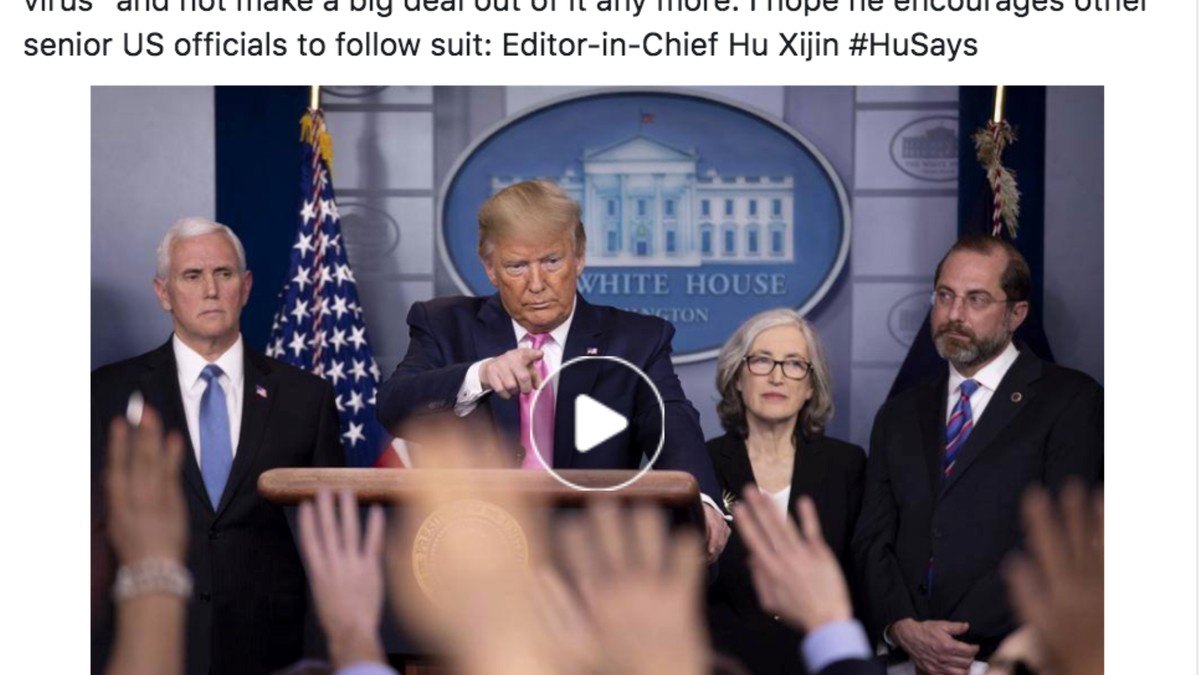 Chinese state media has been flooding Facebook and Instagram with shady political ads praising Beijing and bashing “racist” President Trump as part of a wider campaign to rewrite its part in the global coronavirus pandemic.

The undisclosed political ads, from Global Times, Xinhua News Agency, Global China Television Network (GCTN), and China Central Television (CCTV), all ran on the two platforms in recent months, targeting users around the world in English, Chinese, and Arabic, but they’ve only now been flagged by Facebook as being political.

The ads ran without a political disclaimer, meaning they weren’t subject to the same oversights and didn’t show who they were targeting and who was paying for them. VICE News counted more than 55 ads from all four broadcasters in Facebook’s ad library archive.

The company said many of the ads were not labeled as political and would simply have disappeared once they expired, making it virtually impossible to assess the full scale of China’s propaganda effort.

One video published by Global Times that’s been viewed over a million times questions whether the virus originated in China while labeling Trump’s use of the term Chinese virus as “racist.” Another ad by Xinhua, focusing on Trump’s replacement of the word corona with Chinese in a speech, was labeled “Racist in Ink.”

Another Global Times ad suggested that the Trump administration’s mishandling of the outbreak in the U.S. could make the problem there much worse.

All four publications published multiple posts praising President Xi Jinping’s handling of the outbreak without ever mentioning the fact that China silenced whistleblower doctors for three weeks before he first publicly acknowledged the outbreak.

The Facebook ads are part of a wider propaganda campaign being waged by Beijing in order to rewrite the history of coronavirus and paint itself in a much better light, dismissing claims that its failures to initially recognize the outbreak led to the global pandemic that has so far killed over 50,000 people.

Given the political nature of the ads, they should have had disclaimers attached.

These disclaimers, associated with ads about elections, politicians or “social issues,” allow people to see who the ads have been targeted at and who has paid for them.

Facebook aggressively clamps down on political advertising in core markets like the U.S., the UK and the EU, in many other jurisdictions there are no such rules, meaning the ads posted by the Chinese state media outlets ran without any indication they were political in nature.

Facebook says that some of the ads were not caught by its systems even though they should have been, while others ran “in countries in which Facebook does not require disclosure.”

“We are progressing on our plans to label state-controlled media pages on Facebook, including from China, and will have more to share on this soon. We are continuing to work with publishers and third party experts on this issue to ensure that we get this right” a Facebook spokesperson told VICE News, adding that the coronavirus outbreak will delay the rollout of further political transparency measures.

Facebook is struggling to police its platform during the pandemic, as it has sent home the thousands of people its uses to moderate toxic content. Facebook is relying much more heavily on its automated systems to approve ads and moderate content.

In a letter sent to Ofcom’s CEO Dame Melanie Dawes, and seen by VICE News, the DCMS committee specifically referred to GCTN who “have contributed by disseminating false narratives, such as disputing the place of origin of the novel coronavirus.”