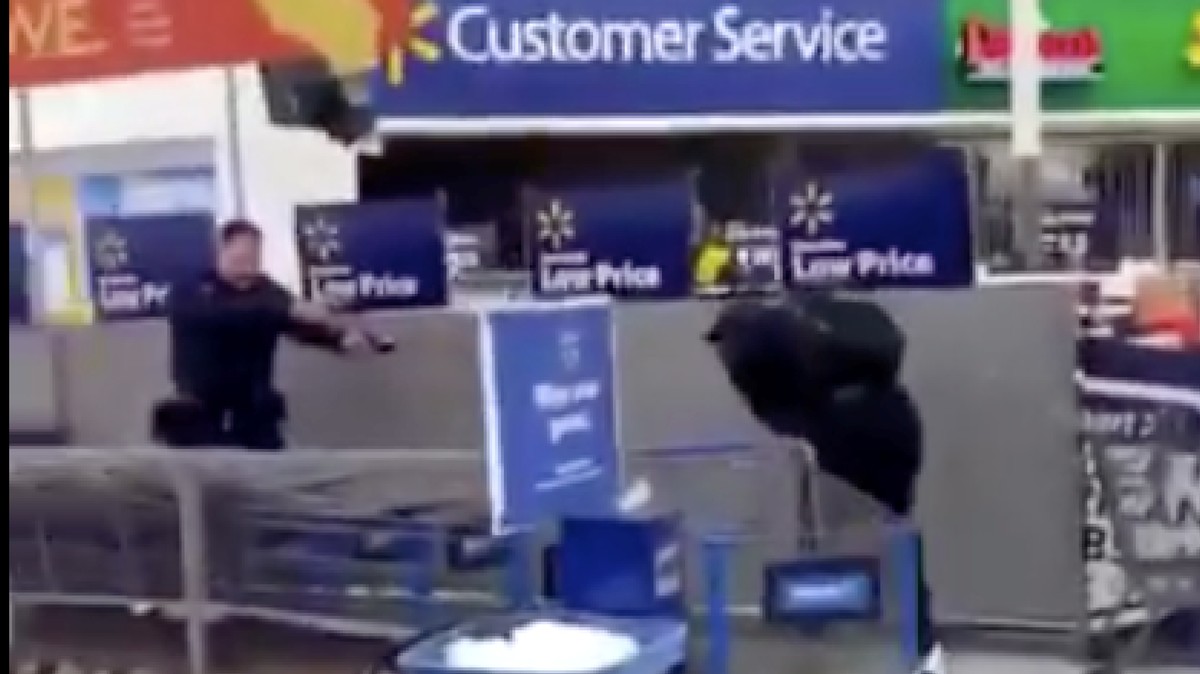 A police officer shot and killed a young black man wielding a baseball bat in a California Walmart over the weekend, in a confrontation that was partially captured on video.

The man, identified Sunday by the Alameda County coroner’s office as 33-year-old Steven Taylor, can be seen in the video swinging a baseball bat near the crowded entrance of the store as two officers approach him with guns drawn, yelling repeatedly at Taylor to “Get back!” One of the police officers fired his taser at Taylor, who dropped the bat and stumbled toward the officers. One of the officers then fired a round that struck Taylor in the chest. He turned and walked several steps away and then fell to the floor; horrified shoppers, many wearing face masks, watched him bleed out on the floor of the Walmart.

“Don’t shoot him no more!” one of the shoppers yelled.

San Leandro Police Chief Jeff Tudor said the officers went to the store responding to a call about a disruptive customer, and, while en route they got an update that there was a robbery taking place at the store. When they got there, they determined that a robbery was not taking place, but Taylor was distraught in the store and refused to drop the bat.

A man who posted the video of the confrontation to Instagram, which he later deleted, said that Taylor seemed to be suicidal before the officers got there, according to The Mercury News.

“This dude was saying he wanted to die before the police even arrived,” the man who posted, who goes by the handle Mike_Myke on Instagram, wrote. “He waited for the police to get here while he was swinging a bat. He was threatening to kill the door greeter. People offered to help him and he refused. He was saying everybody was living his life and he didn’t care anymore.”

“The officer pulled out his gun and told the guy to get back,” he added in the now-deleted post. “The officer started walking backwards with his weapon drawn and the suspect continued to walk forward with the bat. When he went to swing, that’s when the officer shot him. He was shot 1 time and that’s when he went down.”

An attorney representing Taylor’s family, Lee Merritt, said in a statement that the officers’ use of force wasn’t justified, and that the officers used a taser on him twice after he’d been shot and was walking away from them.

The community is already suffering as the pandemic sweeps through the Bay Area. The area is expected to lose some 800,000 jobs in the virus-fueled recession.

In a video posted to social media Sunday night, Tudor, the police chief, said he knew his community was hurting in the wake of the shooting and tried to quell rumors he said were circulating on social media that the officer had shot Taylor multiple times.

“Our officer discharged his service weapon one time, striking the subject in the front of his upper body,” Tudor said. “It is still early on in this investigation, and we will provide you more information in the near future, and as it becomes available so we can be as transparent as possible.”

The police department said the officer who shot Taylor is a 20-year veteran of the force and has been placed on administrative leave.

CORRECTION: Due to an editorial error, an earlier version of this story indicated two officers shot the man, but it was only one.

How Coronavirus Is Finally Fulfilling the Internet’s Promise