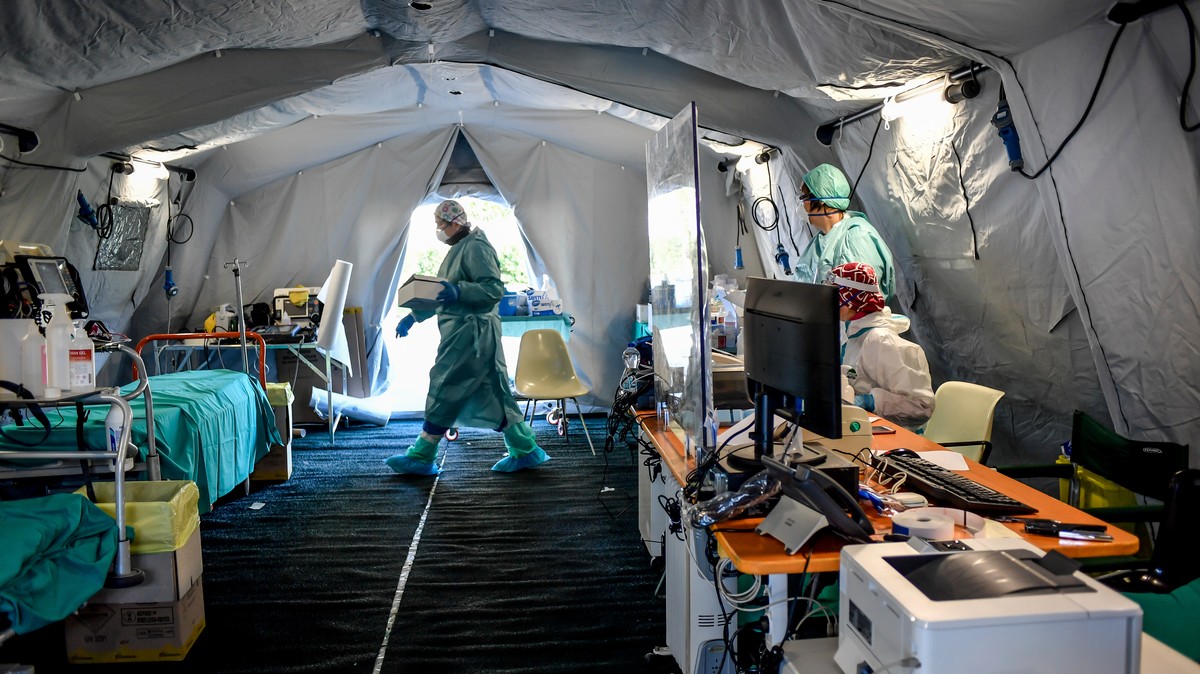 Doctors in northern Italy struggling with the explosion of COVID-19 cases are warning their hospitals are on the brink of collapse and telling other countries to prepare for a fierce battle.

At the epicenter of the coronavirus outbreak in Europe, the sudden surge to more than 10,000 cases in the region in just three weeks has overwhelmed intensive care units, with a shortage of beds and staff and ventilators potentially pushing the death toll higher.

The overflow means patients are being treated in operating rooms, hospital corridors, or recovery rooms. Only a small portion of patients are being housed in negative-pressure isolation rooms, designed to stop airborne contaminants from infecting healthcare workers. Doctors are being forced to make tough decisions on which patients will get ventilation machines or respirators.

COVID-19 cases in Italy have exploded from just a handful of confirmed cases to 10,149 in less than three weeks, and with the number of cases expected to continue to rise dramatically, senior doctors are urging Italians to quarantine themselves as the only way to prevent a catastrophic collapse of their medical system.

The situation is most acute in Lombardy, the northern region that is the worst-affected part of the country, with 5,469 cases, including 440 in intensive care.

“By now, we’re forced to provide intensive care treatment in the corridor, in the operating rooms, in the recovery rooms,” he said. “We gutted entire hospital wards to make room for the seriously ill. One of the best healthcare systems in the world, the Lombard one, is one step away from collapse.”

Massimo Galli, director of infectious diseases at Milan’s Sacco hospital, told The Guardian he had similar concerns. “The pressure on hospitals in Lombardy these days is enormous. I am very, very worried about the impact the virus will have on our health system.”

Lombardy’s top health official, Giulio Gallera, told Bloomberg that the region had dedicated 80% of its 1,123 acute-care beds to coronavirus. But Pesenti said that according to some forecasts, Lombardy could have 18,000 hospitalized coronavirus patients by March 26, between 2,700 and 3,200 of whom would require acute care.

Gallera said that health officials were in a “race against time” to find more acute care beds, with about 150 more due to open in the next week. Whether this was enough to respond to the crisis would depend on the effectiveness of the government’s drastic containment measures.

READ: Why the U.S. could be worse off than Italy with the coronavirus

“If the increase in the number of infected people in need of intensive care doesn’t slow down, we could have issues,” he said.

Groppelli told VICE News that the system in Lombardy had gotten by so far by transferring patients to other regions with capacity. For that to continue to work, authorities would have to ensure that their containment measures worked to stop the rise in new infections elsewhere around the country.

“It’s imperative for Italy to slow down transmission, and this requires strict application by citizens and business of the draconian measures identified by the government,” she said.

Holes in the approach

But even before regions of the north were placed under quarantine Sunday, before the measures were extended to the entire country Monday night, there were signs of major holes in the approach. When news of the impending quarantine in the north leaked Saturday, thousands of people fled the red-zoned areas, raising fears of fresh outbreaks in the south of the country, where the healthcare system is not as well resourced as the wealthy north.

The shortage of trained staff is also an issue. Intensive care wards across Italy were about 3,000 doctors short even before the outbreak, according to their union. And despite their precautions, overworked medical staff are at high risk of getting sick themselves, making about 12 percent of those infected in Lombardy.

Amid the crisis, doctors on the northern front lines have shared their experiences on social media and in the press, warning other countries about what their healthcare systems will be facing once the virus takes hold.

Daniele Macchini, an intensive care physician at the Humanitas Gavazzeni hospital in the badly hit city of Bergamo, located in Lombardy about 25 miles northeast of Milan, posted a widely-shared account to Facebook in which he said he feared that the public did not appreciate the dangers of the virus.

“Let’s stop saying it’s a bad flu,” he wrote. “The war has literally exploded and battles are uninterrupted day and night.’

He concluded by saying he questioned the prevailing message not to panic about the virus.

“I understand the need not to panic, but when the message of the danger of what is happening does not reach people… I shiver,” he wrote.

“We must spread the word to prevent what is happening here from happening all over Italy.”

Cover: Medical personnel work inside one of the emergency structures that were set up to ease procedures outside the hospital of Brescia, Northern Italy, Tuesday, March 10, 2020. (Claudio Furlan/LaPresse via AP)