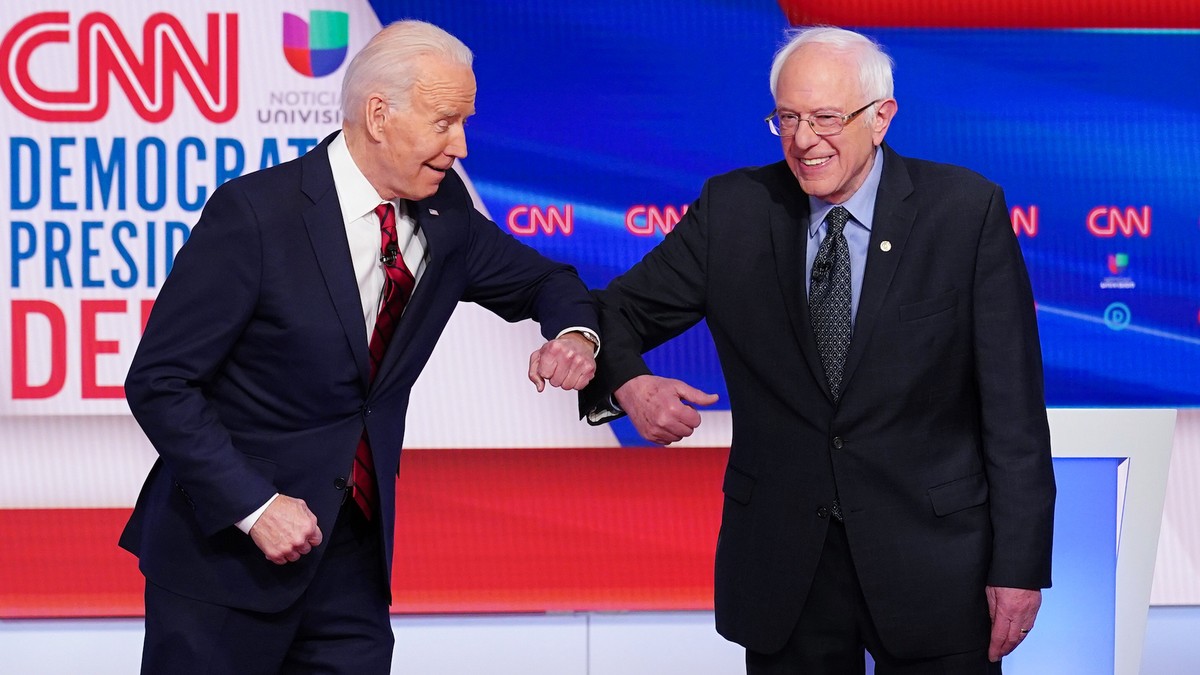 WASHINGTON — The U.S. election is about to go mostly dark — possibly for months.

The three states that decided to forge ahead with Tuesday elections — Florida, Arizona, and Illinois — are struggling to keep polling places open as droves of poll workers fail to show up.

Other states are making emergency moves to delay their own elections for months. And both Joe Biden and Bernie Sanders have been forced to hit pause on their own campaigns.

The primary calendar was already set to thin out after this Tuesday’s primary. But now, after Tuesday there are no large states voting until April 28 at the earliest — and even some of the states set to vote that day are moving to push back their elections.

That means that Biden and Sanders face a long stretch of purgatory where Biden will remain the likely nominee and heavy front-runner, with both sides unable to change the race.

And there’s some question whether states can actually pull off their primaries without risking both low voter turnout and health peril for the people running the elections.

Tuesday’s elections show how hard it is to run an election during a pandemic.

Both Illinois and Florida faced involuntary polling place shutdowns and delays as hundreds of poll workers refused to show up to run the elections. Arizona had already shuttered dozens of polling locations ahead of election day as the state brace for a lack of poll workers.

And the problems aren’t just electoral — holding in-person elections are a potential threat to public health, even after states attempted to make sure the voting sites would be safe. The Chicago Sun-Times reports that there have been shortages of promised sanitizing and cleaning supplies at some Illinois voting sites, increasing the likelihood that polling centers could spread the disease and put at risk both poll workers and voters.

And while those states scrambled to keep their struggling primaries open, Ohio officials took the dramatic step to postpone its own primaries just hours before polls were set to open. After a judge ruled that it was too late to postpone the election, Ohio Gov. Mike DeWine (R) took the extraordinary step late Monday night of declaring a health emergency to push the election back until June.

As the states struggle — and potentially fail — to keep elections running while protecting their voters, Bernie Sanders’ campaign made clear that his supporters shouldn’t risk in-person voting if they didn’t feel safe to do so.

“We are not doing traditional GOTV [get out the vote] outreach in states holding primary contests today. We are making clear to voters that we believe going to the polls amid the coronavirus outbreak is a personal decision and we respect whichever choice they make,” Sanders spokesman Mike Casca said in a Tuesday statement.

Ohio’s last-minute move has been mirrored elsewhere. On Tuesday morning, Maryland became the latest state to postpone its scheduled primary elections, pushing its election back from April 28 to June 2. Georgia, Kentucky and Louisiana have all moved to postpone their primaries to June as well.

A few smaller states still have primaries on the books in the coming weeks. But there won’t be any major elections until the end of April at the earliest — and even that date is looking optimistic as the final states holding elections struggle to get through their Tuesday primaries.

Until then, the Democratic primary will be in limbo. Biden’s efforts to put the race to bed, and Sanders’ push to try to resurrect his flagging campaign, will have to wait until just weeks before July’s planned Democratic National Convention — if that convention can be held at all.

Cover: Democratic presidential hopefuls former US vice president Joe Biden and Senator Bernie Sanders greet each other with an elbow bump as they arrive for the 11th Democratic Party 2020 presidential debate in a CNN Washington Bureau studio in Washington, DC on March 15, 2020. (Photo: by MANDEL NGAN/AFP via Getty Images)

NYC Told to Prepare to ‘Shelter in Place’ With Coronavirus Cases on Track to Top 10,000 Next Week