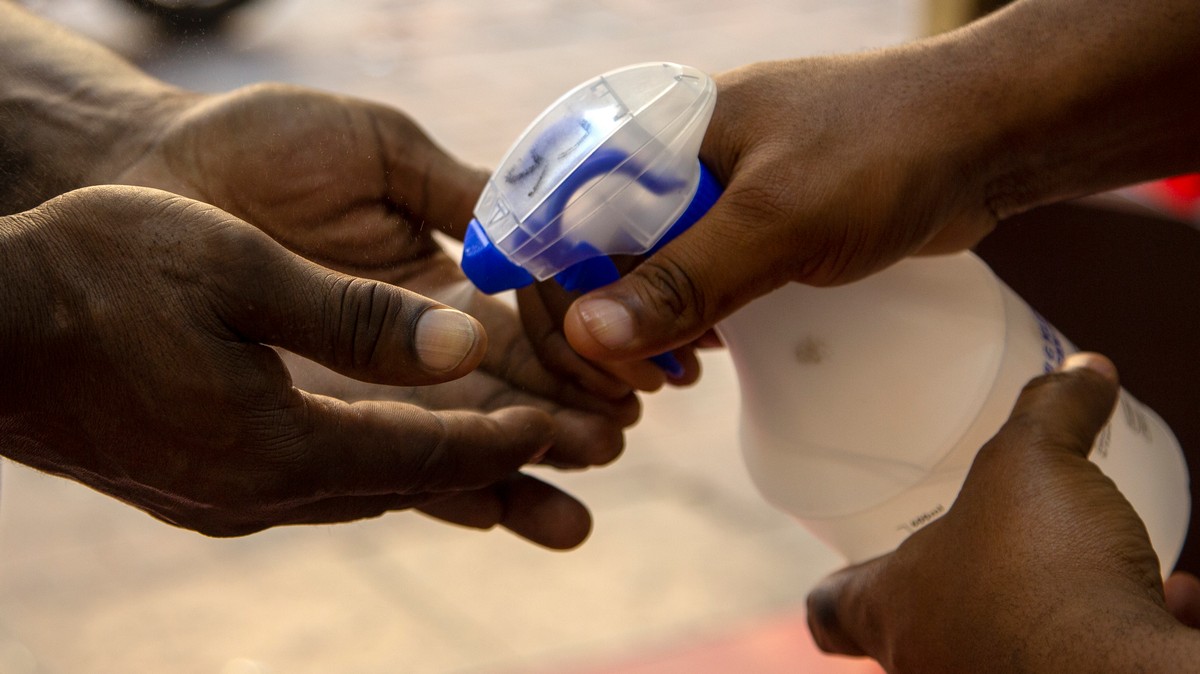 Sara Simpson thought she would be fine when her husband and son decided to stay at his parents’ house during the coronavirus pandemic.

Her in-laws are older, she thought, and they might need help or company.

But after President Trump declared a national emergency, Simpson couldn’t tear herself away from her phone. She started to panic.

“I couldn’t stop clicking on everything,” she said. “I started thinking about my dad and the older people I know, and I burst out crying. I went into the room and sat in the dark until 4 a.m.”

Simpson was diagnosed with generalized anxiety disorder 13 years ago. She usually uses medication to control the symptoms, but her fear of coronavirus was moving toward obsession. While much of the nation is being asked to stay inside and avoid contact with people — perhaps for weeks — that’s weighing heavily on the 40 million Americans with anxiety disorders, who worry about spreading or contracting respiratory illness but also need contact with others to manage.

“My brain in my anxiety state thinks that the more information I have, the more I know, the more safe I can be and the people I love will be.”

Beyond the spread of infection, COVID-19, the illness caused by the coronavirus, is fueling a full-blown anxiety crisis. Organizations, including the World Health Organization, the Centers for Disease Control, the American Psychiatric Association, and the Center for Traumatic Stress released guidelines and resources, all published in February and March, to help the public and mental health professionals cope.

For Simpson and others like her, everything becomes a stresser: fear of spreading the illness, grappling with their own mortality, standing in grocery store lines, and watching the economic markets careen. And for many, there’s some shame in struggling. Simpson still hasn’t reached out to her doctor, even though she’s been seeing her for eight years.

“Here’s why it’s so hard for someone with anxiety,” Simpson said. “Things are changing so fast, so you get your mind used to one thing — maybe this is the last thing? — but then it keeps changing.”

“My brain in my anxiety state thinks that the more information I have, the more I know, the more safe I can be and the people I love will be,” she added.

Millions of Americans are either diagnosed with depression or have at least one depressive episode each year, and many are taking antidepressants to treat disorders and manage their symptoms. The U.S. Food and Drug Administration is watching the international supply chains to make sure drugs manufactured abroad can still get into the country — as of the end of February, the agency said just one unspecified medication had a shortage because of the supply chain.

While there isn’t a drug shortage in the U.S., other difficulties exist: The CDC recommends having at least a two-week supply of prescriptions at home, but insurance companies often will cover only a month at a time. If people want or need more, they’re forced to pay out-of-pocket — or buy from abroad.

Treating anxiety, depression, or other diagnoses like PTSD, obsessive compulsive disorder, and addiction also often requires physical connection. People diagnosed with depression are told to reach out — to doctors, to friends. They’re encouraged to go outside, see loved ones, drag themselves to yoga, the gym, happy hour, AA meetings.

Now, with millions under quarantine, that treatment isn’t safe — at least, not for the moment.

In Albuquerque, Paul Vasquez started a Facebook group on Tuesday to be a virtual space for friends and strangers — mostly from his hometown of Houston — who are struggling and want to talk through how they’re coping with stress.

“If you’re able to get on the Internet, we have the whole world at our fingertips,” the 36-year-old said. “Even if you feel alone, the reality is that you’re not alone.”

Vasquz, a shopper for Instacart, was diagnosed with depression, anxiety, and PTSD in 2009, and he’s spending as much time at home as he can. For now, that’s a fifth-wheel camper that hitches to the back of a truck and bounces over freeway bumps. It’s about 200 square feet with a small kitchen and a bathroom.

Last Friday, he and his partner left their home in a tiny city near the Louisiana-Texas border where they were struggling to make friends and headed west to be closer to family. Now, the pair sit in the half-unpacked camper with their dog and cat, binge “The Outsider” on HBO, and try not to worry.

“I often have that fear that either someone I love is going to die or I’m going to die,” Vasquez said. “And with this coronavirus and them saying, ‘Oh, millions of people could be affected,’ — now it becomes almost rational.”

One member of Vasquez’s Facebook group, Sarah Newbury, has been living with depression since she was 15. About a month ago, her employer asked her to work from her home in Houston for reasons unrelated to the spread of coronavirus.

“I’ve always been introverted,” said the 43-year-old, who does administrative work in radiology. “And I believed I didn’t really need much in the way of human interaction, but I found out during my month of working from home that I actually do need some of it.”

During those weeks, she wouldn’t shower for days at a time. She focused on work, skipped meals, and took lots of naps.

“My self-esteem went way down because I wasn’t taking care of myself, and I was so isolated from other people,” she said.

Newbury decided to go back to the office one day a week. But now, she can’t. Her company has asked her to start using her paid time off to stay at home.

“I’ve been catching myself just staring into space, just detaching from it all. I never do that,” she said. “I haven’t cried yet. I need to cry.”

Shock, grief, and fear are normal responses to a crisis and major traumatic situation. But experts are warning that there’s another chapter coming once this acute phase of the pandemic passes.

Last Friday, when Trump announced the national state of emergency, he expanded the use of Medicare telehealth services, which are typically only allowed for people who live in rural areas. That means that more doctors can see patients via phone call or Skype now.

Some mental health advocates are using the technology to manage the anxiety crisis among their patients. For example, Rosmarin, with the Center for Anxiety, is hosting free 30-minute therapy sessions for anyone who needs it.

But people shouldn’t just use technology to scroll through social media or contact their doctors.

“Social distancing doesn’t mean isolation,” he said. “Now is the time to call an old friend from high school and old family members. Now is the opportunity to smooth out relationships.”

Rosmarin stressed that in the current climate, “People really should not be judging themselves if they’re struggling. Give yourself permission to struggle.”

“You’re not broken,” he said. “Nothing is wrong with you.”

Gaby Caplan contributed to this report.