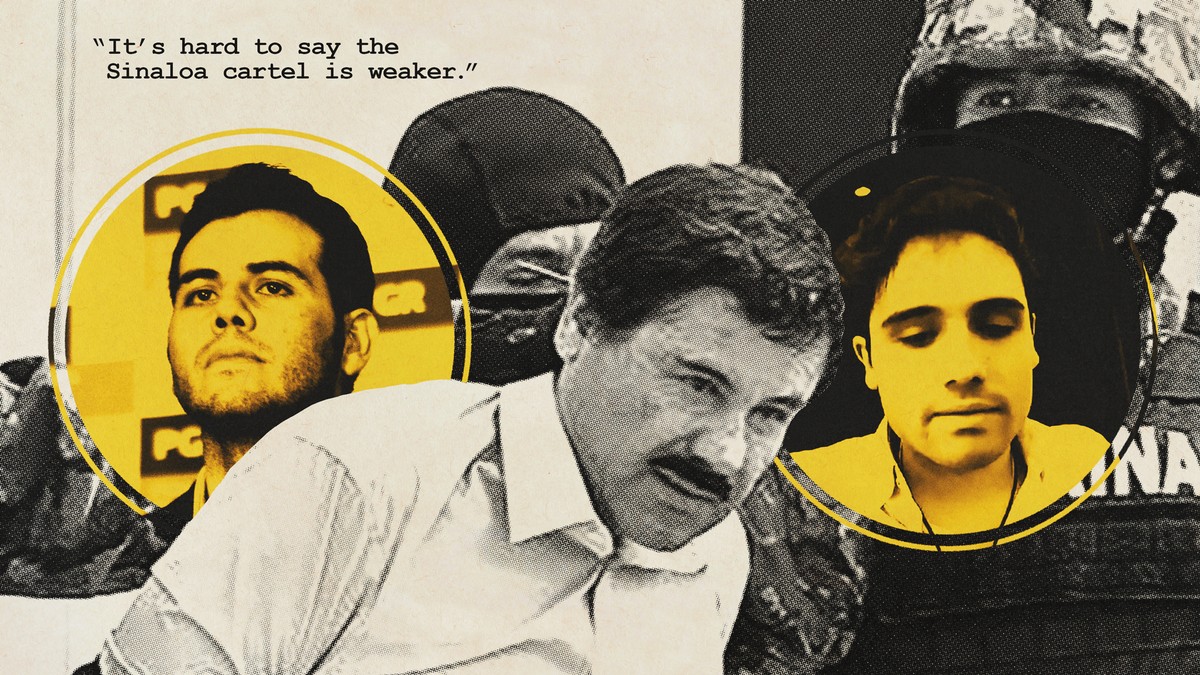 Bureau of Prisons Inmate No. 89914-053 spends his days alone inside a 75-square-foot cell in Florence, Colorado. His only furniture is a concrete slab with a flimsy mattress, and a stainless steel toilet and sink. His narrow slit of a window affords no view of the snow-capped Rocky Mountain peaks that stretch for miles in every direction.

This is the end of the road for Joaquín “El Chapo” Guzmán Loera: ADX Florence, a federal prison better known as the “Alcatraz of the Rockies.” Here he is surrounded by steel doors, concrete walls, maze-like corridors, hundreds of surveillance cameras, and layers of electrified fencing topped with razor wire. Nobody is going to push him out the front door in a laundry cart. There are ground sensors in place to detect tunneling. This time, there’s no escaping.

February 12 marks one year since a dozen Brooklyn jurors handed down a unanimous guilty verdict against the world’s most infamous drug kingpin, condemning him to a life sentence with no chance for parole. Chapo is now effectively cut off from the world, but the chain reaction of events triggered by his capture and conviction is still unfolding far beyond the prison walls. In Mexico, his Sinaloa cartel remains a dominant force. And in the U.S., his former drug-trade associates are cycling in and out of federal custody.

Just last month Genaro García Luna, once Mexico’s top law enforcement official, pleaded not guilty to federal charges that he accepted millions of dollars in bribes from the Sinaloa cartel. His indictment was the other shoe dropping on one of the many bombshell allegations that emerged from Chapo’s epic three-month trial, when one witness testified to hand-delivering suitcases full of cash to García Luna in exchange for protection and information. That accusation was soon eclipsed by testimony that former Mexican President Enrique Peña Nieto solicited a $250 million bribe from Chapo and his partner Ismael “El Mayo” Zambada.

“It’s hard to say the Sinaloa cartel is weaker — it’s hard to put metrics to what that really means.”

Perhaps García Luna, who was living a comfortable life in Miami when he was arrested and charged in the same Brooklyn court where Chapo was prosecuted, hoped his alleged corruption had simply gone overlooked. Now the question is whether Peña Nieto — who has denied ever taking a bribe — is the next target for the feds, or someone else.

Maybe it will be ex-president Felipe Calderón, the man who picked García Luna to oversee the military offensive against the cartels that began in 2006, leading to the arrests or deaths of many top traffickers but plunging Mexico into a downward spiral of violence that continues today. The approach, dubbed the “kingpin strategy,” has splintered the cartels into warring factions, fueling internecine conflicts and bloody turf wars. Each new year brings a record number of murders, with 34,582 officially tallied in 2019. The true death toll, obscured by forced disappearances and bodies hidden away in mass graves, is likely far worse.

Calderón has long been accused of favoring Chapo’s organization during his presidency, which ended in 2012 with the top leadership of the Sinaloa cartel suspiciously intact compared to rival groups. Calderón was indignant when I asked him about this in a 2018 interview, insisting he “established a clear rule of no agreements with anyone.” But García Luna apparently did have an agreement, a very lucrative one at that. His case is proof that the Mexican government isn’t waging any sort of war on drugs. There is a war, but it’s for control over drug trafficking and the money it brings. Mexico’s government has always been complicit in the drug trade. Chapo’s trial just cast a spotlight on that ugly truth for the first time in a U.S. courtroom.

Mexico’s current president, Andrés Manuel López Obrador, campaigned on the slogan “Abrazos no balazos” or “Hugs not bullets,” promising to curb the ceaseless violence and root out corruption. Yet he, too, was implicated in bribery during Chapo’s trial, when an unsealed court filing referenced an alleged payoff from the Sinaloa cartel to his campaign manager during his failed 2006 presidential bid. Much like the allegation against García Luna, it quickly blew over amid the trial’s telenovela-like plot twists.

López Obrador created a new military unit, the National Guard, to combat organized crime, but so far it has failed spectacularly. In October, soldiers detained one of Chapo’s sons, 29-year-old Ovidio Guzmán López, in the Sinaloan capital Culiacán, but they were forced to release him after hundreds of heavily-armed cartel foot soldiers laid siege to the city and threatened to execute the families of the men involved in the capture operation. Eight people were killed in the standoff, which unfolded in real time on social media. It was a major embarrassment for López Obrador, and a visceral indication that Chapo’s downfall apparently did nothing to diminish the power of his cartel. His sons — including Ovidio and his brothers Iván, Alfredo, and Joaquín, collectively known as Los Chapitos — just picked up where Dad left off.

LISTEN: “Chapo: Kingpin on Trial” for free, exclusively on Spotify.

Ray Donovan, who oversaw the hunt for Chapo as the former chief of the DEA’s Special Operations Division, told me the botched Ovidio arrest is “indicative of the fact that the Sinaloa cartel is still there, and it is indicative of the fact that they still have millions of dollars at their disposal, and resources and men and manpower, and they are capable of continuing the drug trafficking business.”

Now leading the DEA’s New York division, where he keeps one of Chapo’s trademark black baseball caps on display like a trophy behind his desk, Donovan argued that Chapo was the Sinaloa cartel’s “innovator” and said taking him out “changes how they have to continue to operate.” Chapo’s conviction, he said, “sent a message to every other cartel leader” that they, too, could eventually face justice in the U.S., but “it’s hard to say the Sinaloa cartel is weaker — it’s hard to put metrics to what that really means.”

Last month, U.S. authorities found a tunnel that stretched for three-quarters of a mile from Tijuana to San Diego, equipped with an elevator, ventilation, and a rail cart to ferry drugs under the border. It was the longest smuggling tunnel ever discovered, about 4,000 feet longer than the first one Chapo was credited with building. The day after the recent tunnel discovery, three Sinaloa cartel members escaped from a prison in Mexico City with suspected help from guards. Clearly, the innovations that Chapo left behind are still very much in use.

“Is there futility in what we do? Are we playing whack-a-mole? I think it’s showing the strength of what our system does; there’s a purpose for it. There’s a need to hold these people accountable.”

With Chapo out of the picture, American media and law enforcement have begun to hype a new Public Enemy No. 1, Nemesio Oseguera Cervantes, better known as “El Mencho.” His Jalisco New Generation Cartel is on the ascent, reportedly flooding U.S. cities with meth while his henchmen commit gruesome acts of violence as they battle rivals in Mexico. Donovan called Mencho’s gang “the fast-growing cartel in Mexico, with global reach.” And he emphasized that the U.S. and Mexico are still working together to catch and extradite him and others: “When it’s all said and done, we’ll continue to pursue these individuals with our counterparts down there.”

READ: From ‘the Alcatraz of the Rockies’ to the streets.

Chapo’s trial was supposed to prove that the system works, to show that even the biggest, baddest kingpin can be captured, extradited, and convicted. But at what cost? And as a means to what ends? The actual taxpayer bill for the trial has never been calculated, but it surely runs into the millions. The ostensible purpose was to show that anyone can be brought to justice, but in some ways it revealed how warped our collective sense of justice has become.

There was never any real doubt about Chapo’s guilt. The absurdity of his defense — that he was merely the fall guy for the real boss, El Mayo — was laid bare by mountains of evidence, including thousands of incriminating BlackBerry messages that showed Chapo to be a micromanaging control freak, who obsessively monitored the status of even lowly marijuana shipments. But the case was truly made on the testimony of the cooperators, 14 people who were once among Chapo’s closest associates, who agreed to take the stand in exchange for leniency in their own cases.

Now that a year has passed, some of those cooperators are already reaping the benefits of their deals. Jorge Cifuentes-Villa was a major Colombian cocaine trafficker who testified about gifting Chapo a helicopter and sending his younger brother Alex to serve as Chapo’s lieutenant in the mountains of Sinaloa. Bureau of Prisons records indicate that Cifuentes-Villa was released from federal custody on Dec. 5, 2019, less than seven years after his extradition, even though he was eligible for a life sentence.

The list goes on. El Mayo’s son and heir apparent, Vicente Zambada-Niebla, is set for release in 2022. Court records indicate that Dámaso López Nuñez, aka “El Licenciado,” Chapo’s former right-hand man, may be getting his life sentence reduced, though the exact terms of his deal remain under seal. His son, known as “Mini Lic,” is also in U.S. custody and cooperating with the feds, though last month Mexican authorities issued an arrest warrant for him because he’s suspected of the murder of a prominent Mexican journalist — an allegation that directly contradicts his father’s testimony during the trial.

READ: The 10 wildest moments and stories from El Chapo’s trial.

The U.S Attorney’s Office in Brooklyn declined to comment when asked about the various deals given to the Chapo cooperators and their current whereabouts.

In her first interview since the Chapo trial, Andrea Goldbarg, the original prosecutor in the case, told me the investigation, extradition, and conviction would not have been possible without help from cooperators.