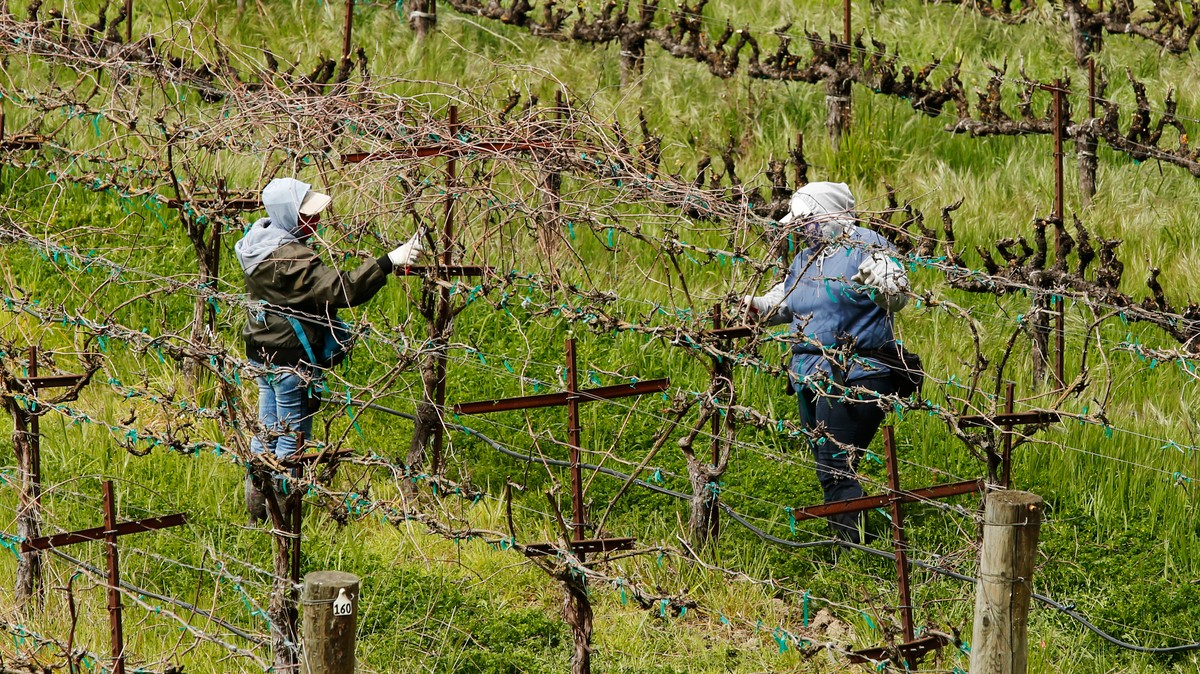 Every morning, while most of America sits at home on coronavirus lockdown, José Gutierrez heads out into the West Texas countryside to tend fruit trees. He doesn’t have health insurance, but he also can’t afford to stop working. So each day, he risks contracting the virus.

“To work in the fields, maybe we are exposed, but we have to keep working,” the 52-year-old said. “I’m afraid of not having food for my family.”

Originally from Mexico, Gutierrez, bounces between different Texas orchards, wherever he can find work. None of his jobs cover healthcare, even though he’s a legal permanent resident. He and his colleagues are taking precautions to avoid spreading COVID-19 — driving separate cars instead of their usual carpooling, working with extra distance between them — but most of his information about the virus has come from the news, not his jobs.

With bars and restaurants in most major cities either closed or offering takeout only, U.S. residents are relying on their own kitchens — and the farmworkers that supply them — more than ever. They’re the crucial first link in the food supply chain that’s keeping grocery store shelves stocked. During the lockdown, federal and state officials have declared farm work “essential,” allowing farmworkers to stay on the job. They’re so vital that last week the State Department relaxed interview requirements for the H-2A visa program, which allows migrant farmworkers to temporarily work in the U.S.

But more than half of farmworkers in the U.S. don’t have healthcare, and many live paycheck-to-paycheck. They’re doing what they can to protect themselves and their co-workers from the contagious respiratory illness, but in some cases, they’re not getting much information from their employers, if they’re getting any at all; the U.S. has virtually no mandatory nationwide rules for agriculture concerning the coronavirus pandemic, and sometimes, farms don’t provide adequate hygiene facilities, even without the added stress of COVID.

“There’s really no pre-existing infrastructure for this as far as worker health is concerned,” Daniela Dwyer, an attorney at Texas RioGrande Legal Aid, told VICE News, “because there’s no requirement, even for H-2A workers, that people be provided sick leave or be provided any health insurance.”

Some farms, especially large corporate ones and union workplaces, have taken more safety precautions. Joselin Castro, an undocumented migrant who works in Salinas, California, picking cauliflower, said her crews have been encouraged to wash even more than aggressive food safety requirements already demand. They’ve also been told to stay separated. But it’s not always possible to maintain six feet of social distancing while producing food, as the FDA notes. And the farmworker population in the U.S. is rapidly aging, which puts them at further risk of coronavirus.

“Well, the truth is, during work at the machines, we are a bit stuck together,” she said. “Then, after, when we eat, yes, the people separate themselves.”

She’s proud to help keep food in the stores, but she doesn’t have health insurance, and she worries her job is putting her at risk.

“Of course you’re worried because any person could infect us,” she said. “We are in a crew of 30 people that see each other every day, then go home and we have contact with other people, and come back once again to work, so we don’t know where any type of sickness is going to come from.”

Last week, Texas RioGrande Legal Aid did a drive-by inspection of multiple farms and packing sheds for onions and cabbage in Hidalgo County, Texas. Even though the organization has been scaling back site visits due to the coronavirus, the problems were still evident.

“They observed workers in the hundreds working in the onion harvest, which is going on right now, as if nothing had changed,” said Dwyer, an attorney with the organization. “The status quo prior to COVID-19 was overcrowding in housing and transportation and in the work site, lack of water, lack of porta-potties, and lack of hand-washing facilities.”

Emma Torres, a former farmworker who helped found Campesinos Sin Fronteras (Farmworkers Without Borders), a farm worker health nonprofit based near Yuma, Arizona, has seen the same problems during the outbreak.

“Staying in groups of less than 10 people, that’s almost impossible,” she said. “Even if they have precautions in the fields where they cover their face or have gloves, once they get on their bus, they’re traveling together in groups of 20, 30 people.”

Various federal entities, as well as states, counties, and growers associations, have published guidelines on coronavirus safety. (The federal government has said that, so far, no cases of coronavirus have spread through food). But those guidelines are just recommendations, not binding rules.

“There is not a ‘one size fits all’ approach to managing this public health challenge — local health authorities will take the lead on recommending appropriate response actions for the situation in their community,” a U.S. Department of Agriculture spokesperson told VICE News in an email. “Our front-line supervisors and district managers are working closely with state and local health authorities to handle situations as they arise.”

Individual employers are leading the charge too. D’Arrigo Brothers, a California-based produce company with 2,000 employees, said it’s reducing contact in facilities and educating workers. The company is also asking those who are sick or who have sick family members to stay home and doing extra cleaning in high-traffic areas.

“Every day, I’ve been talking about this,” said Isaac, a 41-year-old farm foreman in Delano, California, who asked not to use his full name or the name of his employer. His grape crew, which is currently doing repairs to the ranch, now works and eats with extra separation. “If I see somebody sick, they’re going home no matter what,” he added.

But for many farmworkers, missing even a few days of work is disastrous.

Margarita Ortega, a 44-year-old grape worker from Rich Grove, California, said there’s been less work since the coronavirus hit. She can’t afford to miss more. She has five kids, and her husband can’t work because of a knee injury.

“Right now, I don’t know what I’m going to do if I stay without work,” she said. “I would be out in the street.”

Even those who have insurance, a privileged few in the industry, are still feeling deeply insecure.

“Thank god I have insurance,” said Rocio Flores, a 57-year-old who works in Salinas, California, picking cauliflower for Dole. She’s a single mother who also has five kids. “I can’t leave my job. My rent, my food, my bills, they all depend on it.”

Cover: In this March 24, 2020, photo, farmworkers keep their distance from each others they work at a vineyard in California. (AP Photo/Rich Pedroncelli)