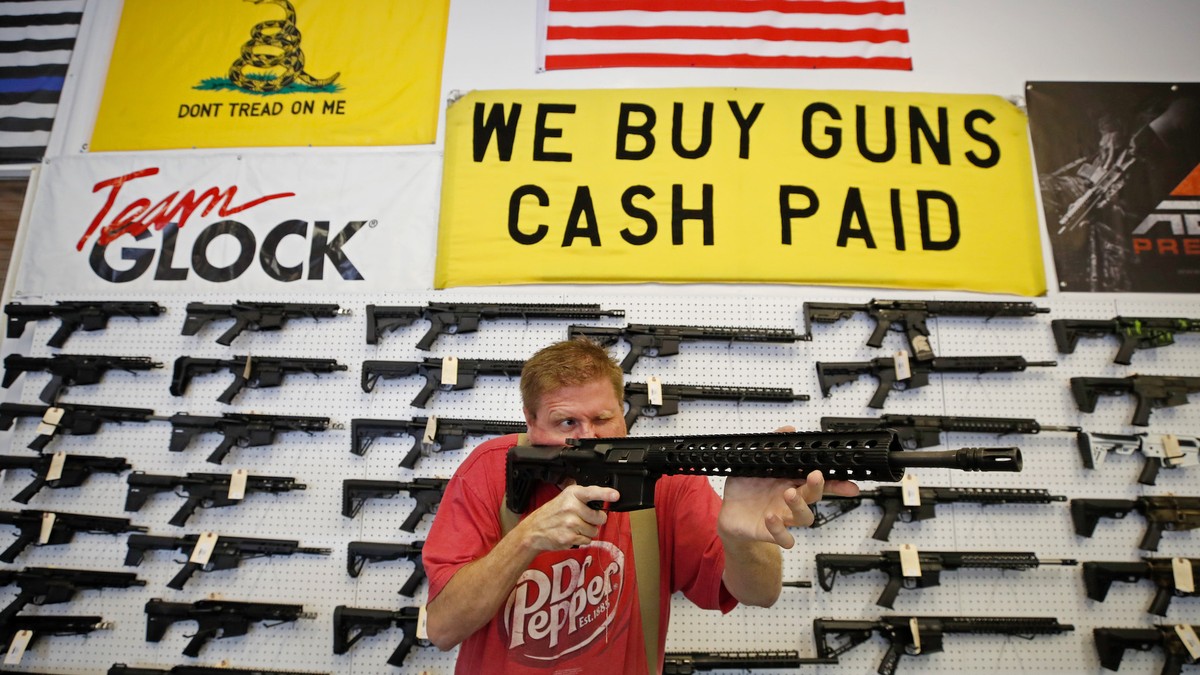 In California, they waited in lines that stretched around the block. In Wisconsin, they created a scene that store owners could only describe as “crazy,” prolonging waits for background checks. In Washington, DC, they so overwhelmed the city’s only federally licensed gun dealer that he simply closed up shop.

And on the podcasts and websites of firearms lifestyle and concealed carry aficionados, gun rights proponents found themselves in a delightfully unexpected situation: watching a new crop of Americans desperately try to get a gun before the coronavirus crisis set in — and feeling like the world was starting to see things their way.

“There’s a little bit of schadenfreude,” said Lee Williams, a former journalist and police officer who founded the website The Gun Writer, where he often covers restrictions on gun rights. “I don’t feel good or happy in any way that people who want a firearm can’t get one. It’s not a feel-good moment. But I think there’s some kind of vindication that people want to feel safe.”

In the weeks since the coronavirus pandemic began to take hold on American society, gun sales have surged. On Thursday, the FBI reported that they conducted 3.7 million background checks in the month of March — the highest number since the bureau’s modern process began.

And gun dealers say that much of their spike in business lately has been from first-time buyers.

“We had more gun sales in three days than we had over the past month,” a Pennsylvania gun dealer named Justin Chadwick told the Observer-Reporter newspaper. “People who had never had guns before are buying. They’re panicking, worried about people breaking into their homes, and are desperate to protect themselves.”

So far, the public debate over buying guns in the age of coronavirus has largely played out in familiar terms: governors in a dozen or so states ordered gun shops to close along with other non-essential businesses, while industry and legal groups fought back. On Monday, the Trump administration officially deemed gun stores to be “essential,” and, according to a tally by the Trace, only five states still have regulations in place forcing them to shut.

But on the blogs and podcasts of the armed citizen and concealed carry community, a more foundational conversation is playing out: whether their vision of guns as objects not of danger, but of protection amid a dangerous world, is winning new adherents.

“A bunch of people, because this suddenly happened, went, ‘Oh, I’m unsafe,’” says Rob Morse, the host of the Self Defense Gun Stories Podcast, which recounts real-life tales of people using their firearms to ward off attackers. “The truth is you never were, you just realized it now.”

“People are waking up, saying, ‘Wait a minute, what do you mean I need a gun?’ All of a sudden they’re realizing that this affects them.”

David Codrea, a gun rights advocate who blogs at The War on Guns and Ammoland, had a similar reaction. “People are waking up, saying, ‘Wait a minute, what do you mean I need a gun?’ All of a sudden they’re realizing that this affects them.”

“Every society has gone through tremendous upheavals and crises and ultimate destruction,” he went on. “I hope it doesn’t happen. But if it does happen, if things do go bad, I think a lot of people are going to see the utility of having a firearm that has a 30-round magazine.”

Jennifer Carlson, a professor at the University of Arizona who studies the world of gun culture, says it’s not at all surprising that the self-defense blogs are thrilled by recent events.

“Gun owners are generally very excited about teaching someone about how to hold a gun, how to shoot a gun, demystifying guns as scary objects — that guns are tools of safety,” she said.

“What’s different this time” — as opposed to other runs on firearms, such as in the aftermath of the election of Barack Obama — “is that this doesn’t appear to be merely a political statement, merely driven by fear that a gun available today is going to be outlawed tomorrow,” she added. “Instead it seems to be primarily about fears and anxieties about social collapse, and the need for self defense.”

Of course, beyond the anecdotal signs, it’s not in fact clear how much the recent surge in gun sales has been fueled by new gun buyers, let alone people who had previously opposed gun rights.

Nevertheless, gun blogs are gleefully offering guides to potential recruits, hailing their conversion: “Welcome to new gun owners,” one site wrote, “even though you all should’ve been prepared.”

Some gun rights figures seem torn about whether to wholeheartedly welcome the newcomers, many of whom they see as their longtime cultural adversaries.

Williams began a recent post, entitled “Now, even anti-gun Californians want a gun,” with a dictionary definition of “hypocrisy.”

Codrea uses a different term. “I see some resentment,” he told VICE News. “I personally am not sympathetic to someone who votes for politicians who infringe on the Second Amendment, then turns around and is deciding their hindquarters are important enough that they want something they’ve been denying to their countrymen.”

“I think that what we’re seeing is an immediate reaction — how much of that will stick will remain to be seen,” Codrea said. “Whether or not they are going to change long term politically, whether they’re going to think deeply enough, and say, ‘My rights have been eroded,’ I don’t know.”

Rob Morse agrees. “I think in six months, we’ll be able to buy a lot of secondhand guns cheap.”

Cover: A worker inspects an AR-15 gun at Davidson Defense in Orem, Utah on March 20, 2020. – Gun stores in the US are reporting a surge in sales of firearms as coronavirus fears trigger personal safety concerns. (Photo: GEORGE FREY/AFP via Getty Images)

Injured, Imprisoned, or Dead: The Consequences of Protesting in Venezuela