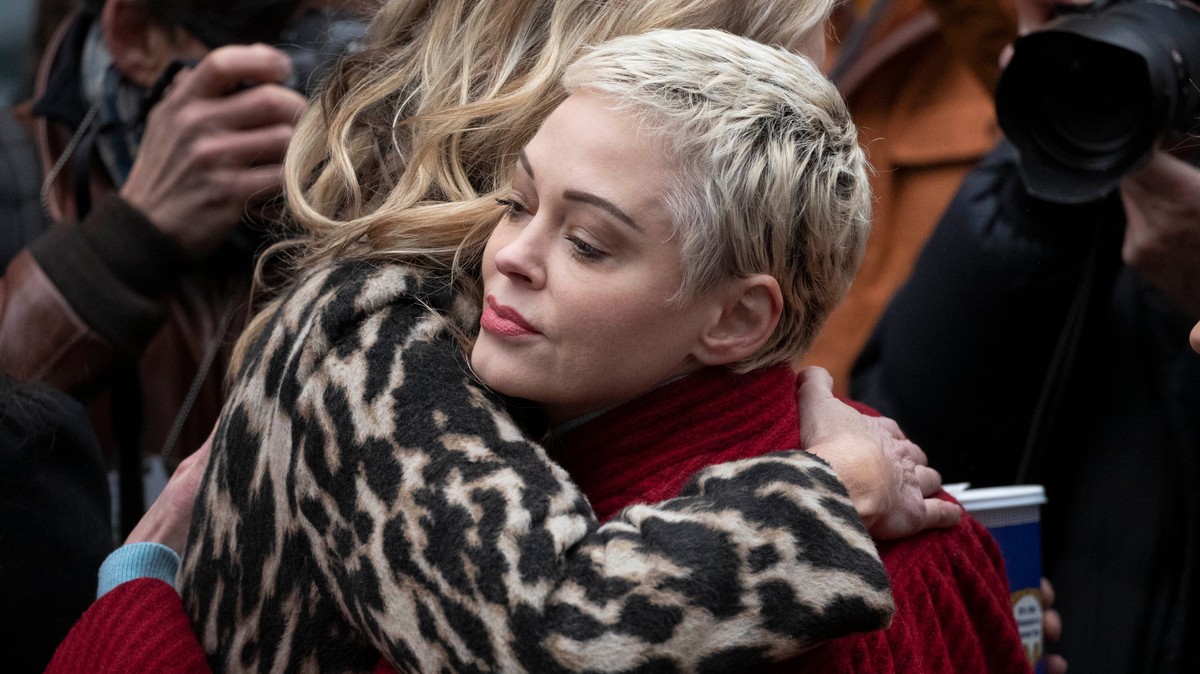 Minutes after Harvey Weinstein, hunched over a walker, entered a Manhattan courthouse Monday to start his long-delayed sexual assault trial, several of the disgraced Hollywood producer’s accusers gathered outside to celebrate that he’s even facing criminal consequences — and to make it clear that their work was not over.

“I’m just a little person. I am not a famous actress. I never had a fantastic career in the entertainment industry — thank you, Harvey Weinstein. But today, I think, is a triumph for the little people,” Louise Godbold, executive director of a trauma education non-profit, told a crowd of reporters as signs proclaiming “justice for survivors” bobbed behind her.

“It’s a victory for every person who doesn’t have that kind of wealth and influence, because it’s sending a message that there is gonna be a reckoning,” she added.

READ: Harvey Weinstein is finally going on trial. Here’s everything you need to know.

The women who spoke outside the courtroom call themselves the “Silence Breakers,” and include actresses Rosanna Arquette and Rose McGowan. Many wore bright red coats and shirts because, they said, red is a powerful color. More than 80 women have accused Weinstein of sexual misconduct dating back decades, but the women who spoke outside the courthouse will not testify at his trial. Instead, the trial will center around Weinstein’s alleged encounters with just two women.

Production assistant Mimi Haleyi has said Weinstein forcibly performed oral sex on her in 2006, and an unnamed woman alleges the movie mogul raped her in a hotel room in 2013. Weinstein is facing five sex crime charges, including rape and “predatory sexual assault,” in connection to those allegations. He has pleaded not guilty and denies all allegations of nonconsensual sex.

“But today, I think, is a triumph for the little people.”

Several other people who say they were harassed or assaulted by Weinstein, however, are also expected to take the stand, including “Sopranos” actress Annabella Sciorra. She’s accused Weinstein of violently raping her in her New York apartment in the early 1990s. Prosecutors hope her testimony will demonstrate that Weinstein had a history of sexual misconduct.

“We didn’t have our day but hopefully they will,” McGowan told the crowd outside the courthouse Monday. “And we join hands with them. Their victory will be our victory. Their loss will be our loss.”

“I can smile today. I can be free,” she added. “Living in silence is a death sentence to your soul, because when you get killed by being raped you carry around a dead person inside you, until you can find a way to birth it.”

During the press conference, the women repeatedly praised that the allegations against Weinstein triggered a worldwide cultural reckoning about the pervasiveness and consequences of sexual misconduct. TV reporter Lauren Sivan, who’s said that Weinstein masturbated into a potted plant as she watched, mocked the fact that the former producer recently told the New York Post that he feared his work on behalf of women wouldn’t be remembered.

“He’s wrong. We will definitely remember him,” Sivan said. “He put #MeToo on the map as a movement that has taken over the country and the world. He has changed sexual harassment policies and workplaces across the nation, even in our own goverment. He has made it more effective and safe for people to report sexual abuse.”

Weinstein is, arguably, the first celebrity to face a criminal trial in the #MeToo. If he’s convicted of predatory sexual assault — meaning that prosecutors show he committed serious sexual assaults against at least two women — Weinstein could face life in prison.

But despite his infamy, a Weinstein conviction is far from assured. Sciorra’s allegation, for example, was deemed too old to be tried as a separate rape charge. And his defense lawyers have signaled that they may focus on how the unnamed accuser continued to email Weinstein after he allegedly raped her, as court documents show.

McGowan also vowed to expose people who, she said, helped Weinstein. “If he gets acquitted, his accomplices will know no rest because we will come for them,” she said.

Sivan was also bewildered by the idea that Hollywood could once again let Weinstein work as a producer.

“Does anyone really want to see that?” she asked. “It’s like a pedophile saying, ‘I can’t wait to go back to coaching Little League as soon as this is all over.’ This is a dangerous predator.”

Cover image: Actor Rose McGowan is hugged at a news conference outside a Manhattan courthouse after the arrival of Harvey Weinstein, Monday, Jan. 6, 2020, in New York. Weinstein is on trial on charges of rape and sexual assault, more than two years after a torrent of women began accusing him of misconduct. (AP Photo/Mark Lennihan)