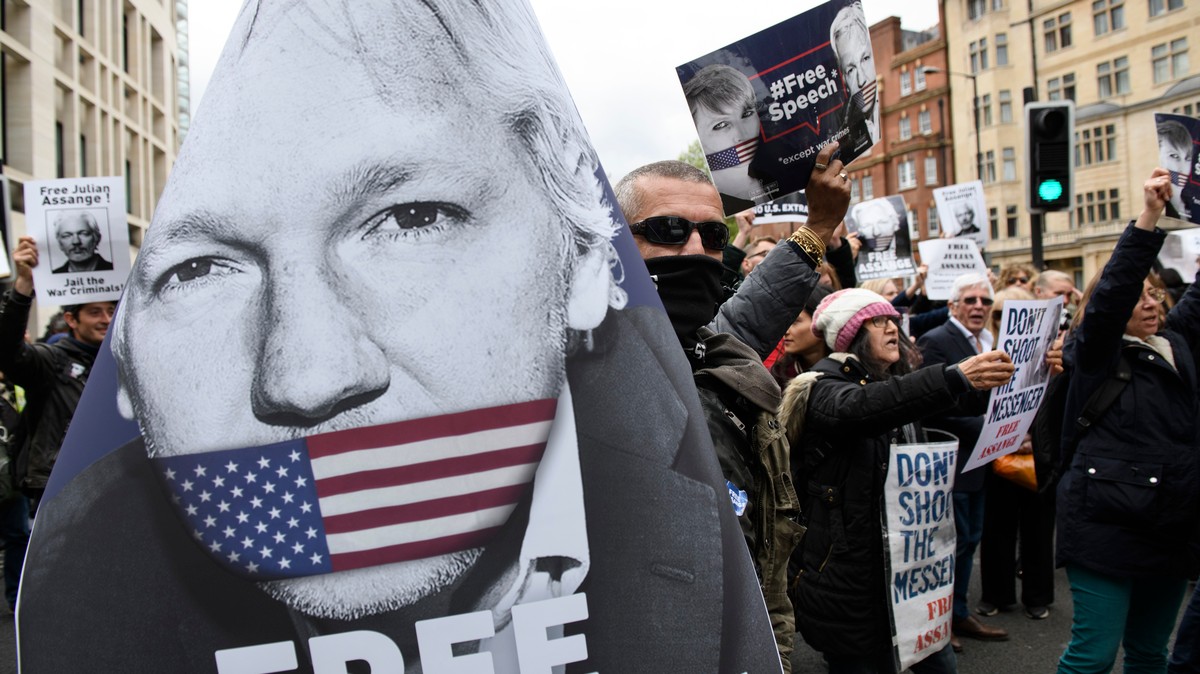 WASHINGTON — President Trump might really come to regret going after Julian Assange, once the renegade activist’s lawyers get through trashing Trump and his minions in British court.

Lawyers for Assange, the founder of WikiLeaks, aim to save their client from American prison by ripping Trump for politicizing the U.S. legal system, and arguing their client couldn’t possibly hope for a fair trial under Trump if the U.K. grants America’s extradition request. Unfortunately for Trump, he’s given Assange’s lawyers plenty of material to work with on that score.

“This is a political prosecution,” one of Assange’s lawyers, Jen Robinson, told reporters outside the courthouse as the hearings kicked off Monday. “This case is an abuse of process.”

The new feuding between Trump and Assange marks a stark reversal from the 2016 campaign, when Trump breathlessly praised WikiLeaks for its explosive disclosures about Hillary Clinton, famously blurting out: “I love WikiLeaks!”

If Assange wins, the end result may be a foreign court’s stamp of disapproval on the politicized U.S. legal system of the Trump era, and an official verdict from London that Trump has bent the Department of Justice past the breaking point. In that sense, Assange’s defense involves putting Trump on trial for undermining U.S. law.

Such a finding would mark another embarrassing debacle for Trump’s Attorney General William Barr, who’s been accused by even some of his former underlings of enabling Trump’s most “radically authoritarian” tendencies, in part by personally interfering in the prosecutions of Trump’s friends and enemies.

“Bill Barr has been systematically wrecking our justice system since he got there by undermining our checks and balances,” Donald Ayer, Barr’s former deputy at the DOJ during the George H.W. Bush administration, told VICE News. “He needs to leave.”

Assange’s lawyers have gathered evidence that Trump got personally involved in determining Assange’s fate for political reasons, with a bizarre cast of intermediaries:

—A fugitive tech entrepreneur wanted in the U.S., Kim Dotcom

Assange’s lawyers claim, citing Rohrabacher, that Trump green-lit offering a presidential pardon to Assange if the jailed radical activist would deny that Russia hacked the emails from Democrats published by WikiLeaks before the 2016 election.

Assange’s denial of Russia’s involvement would surely have pleased Trump, who’s railed against the idea that he might owe any part of his 2016 victory over Clinton to Moscow. American intelligence agencies uniformly agree Russia was responsible, and that Russia intended to help Trump’s campaign.

Rohrabacher admitted dangling a pardon in front of Assange in August 2017, if Assange would say “who actually gave him” the Democratic emails. Rohrabacher added that he briefed Trump’s White House about it too. But he said Trump wasn’t personally involved.

That last part has been contradicted by Kim Dotcom, a Trump booster who’s lately diverged with Trump over the Assange case. (Dotcom also happens to be fighting his own extradition battle with the U.S. over pending copyright and fraud charges, from his palatial estate in New Zealand.)

Dotcom, who has a long public history of chatting with Hannity, claims he helped arrange the Rohrabacher overture. He told VICE News on Wednesday he gave Assange’s lawyers “powerful” evidence suggesting Trump knew all about it.

Dotcom released text exchanges with someone named “Sean,” whom Dotcom described as “Trump’s best friend.” He demurred on whether that meant Sean Hannity, who has a famously close relationship to Trump and, on separate occasions, has extended public invitations to both Dotcom and Assange to guest-host the Hannity radio show.

Days after meeting with Assange, Rohrabacher went on Hannity’s television show, where Hannity asked if Assange deserves “immunity.” Roharabacher replied that if Assange helped “thwart” the Russia investigation, “he deserves a reward.”

Dotcom told VICE News he gave Assange’s lawyers “338 pages of text messages with Trump’s best friend, who is also a secret supporter of truth-teller Julian Assange. I would never have made some of those messages public if Trump didn’t lie by saying he knew nothing about the pardon proposal to Julian.”

Assange didn’t name a non-Russian source, despite Rohrabacher’s urging. Months later, Assange was slapped with criminal charges by U.S. prosecutors in a nominally unrelated hacking and espionage case. Dotcom now claims the indictment was intended as revenge for Assange’s refusal to name someone besides Russia as a source for the emails.

Leaked audio recordings from a well-connected GOP Washington insider suggest Grenell may have acted on instructions from Trump to help bring Assange into U.S. custody. The recording features Arthur Schwartz, a Trumpworld insider and Grenell associate, telling activist and journalist Cassandra Fairbanks that Grenell was “taking orders from the president” when he got involved in the Assange case.

Grenell assured Ecuadorian officials, who were housing Assange at their embassy in London, that the death penalty was off the table if they let Assange go, ABC News reported last April. Fairbanks released part of her conversation with Schwartz about Grenell on Twitter Wednesday.

Assange’s legal team is expected to argue that the U.S. was so desperate to take Assange into custody that American officials, via Grenell, agreed in advance to take a specific sentence off the table before trial, according to Politico.

Schwartz told Politico he “barely” remembers that conversation, and told Fairbanks “a bunch of nonsense,” anyway.

“I highly doubt I would tell her anything real, accurate or of any importance,” Schwartz told the outlet. He said Fairbanks is “not someone that I trust.”

Assange’s lawyers argue all this apparent political self-dealing torpedoes Assange’s chance for a fair trial in the U.S.

A U.S.-U.K. treaty bars extradition for political offenses. So the more Trump can be shown to have meddled in Assange’s fate outside regular legal channels, the more evidence he hands the defense.

And not just in the Assange case. The bizarre backroom shenanigans that took place during the sentencing of Trump’s friend and former adviser Roger Stone also provide grist for Assange’s legal team.

All four prosecutors quit that case in a spectacular DOJ rebellion earlier this month after Barr stepped in to recommend a lighter sentence for Stone, who was convicted of lying to Congress about his efforts to create a backchannel between Trump’s 2016 campaign and WikiLeaks.

The Stone case shows “the Trump Administration is blatantly demonstrating its readiness to interfere in the criminal justice system to harm its enemies and favor its supporters,” Assange’s lawyer Edward Fitzgerald told London’s Woolwich Crown Court on Monday.

DNC Superdelegates Are Getting Desperate to Stop Bernie Sanders