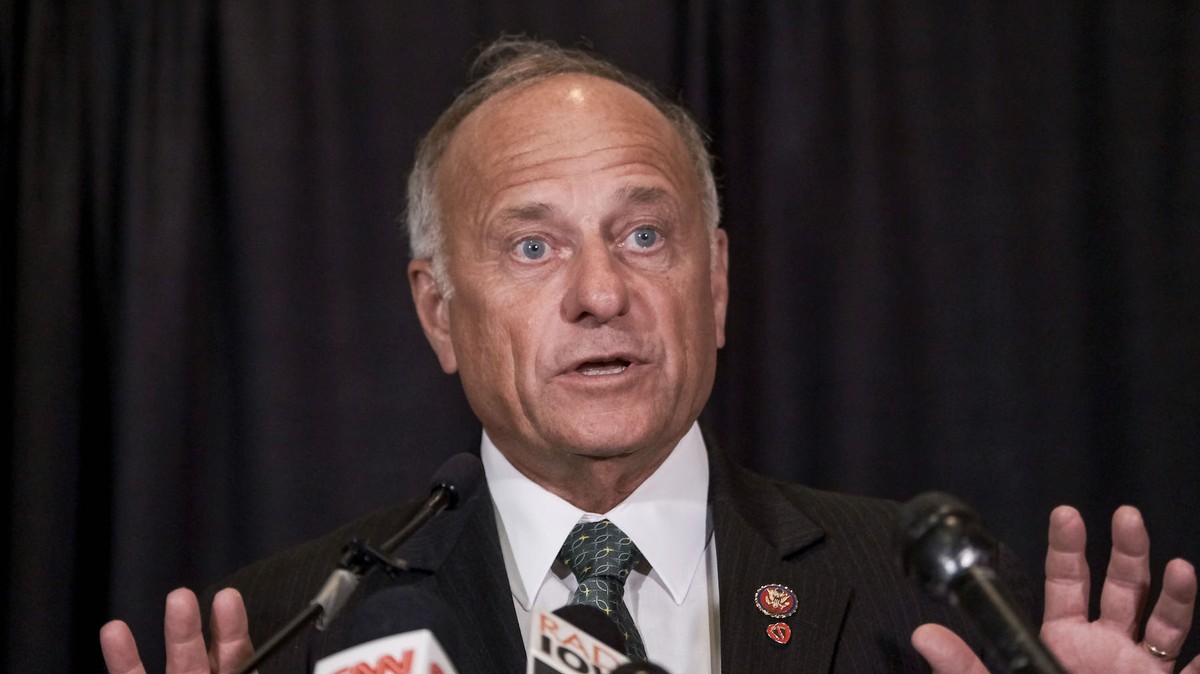 Iowa Rep. Steve King took to the House floor Friday with a bizarre speech and presentation to argue that white nationalism is a leftist conspiracy promoted by the likes of billionaire philanthropist George Soros.

King timed his speech to coincide with the one year anniversary since the publication of his disastrous interview with the New York Times, in which he asked when, exactly, language like “white nationalist, white supremacist, Western civilization” became offensive.

In response to his comments, then-House Maj. Leader Kevin McCarthy, a Republican, stripped the congressman of his committee assignments.

Now, King wants to set the record straight, by basically doubling down on his comments he made to the Times (which he’s described as a “disparaging misquote” — the newspaper has stood by its reporting.”)

In his speech on the House floor, he recalled an interview he did in 2018, when he was asked to define white nationalism.

“I said, ‘it might have meant something different one or two years ago, but today it implies racist,’” King said.

“I’ve been paying attention to the weaponization of language,” King added. “And this is what the left has been doing. They’ve been calling people racist for 20 to 25 years, and they’ve watched as Republicans, especially southern conservative Republicans, curl up away from that kind of accusation and it shuts them down.”

To hammer home his point, King trotted out a presentation showing a Lexis Nexis search of media reports in 2016 containing the phrase “white nationalism.”

“How did it happen that a terminology was virtually unused, how does it happen that this becomes the word tagged on me?” King said. “This is a weaponized term created by the left to attack conservatives with. They wore out the term ‘racist’ and needed to make up new terms to be offended by.”

He said his chart showed that searches for the term ”white nationalism” spiked around the election, which King said proved his point.

“I’m hopeful this new year we have, 2020, will bring about some clarity of vision on the part of my colleagues, the American people,” King said. “I don’t know if I have as much hope for the press.”

During his tirade, King invoked an anti-Semitic conspiracy theory about Soros, a Holocaust survivor. Proponents of the theory use Soros to argue that Jews control the media and global economy.

“The resistance movement was born in that hotel by Democrat leadership led by George Soros and no doubt funded by George Soros,” King said Friday, referring to a meeting involving Democratic leaders after the 2016 election. “Out of that also came some words to be weaponized: white nationalist, white supremacist, Nazi, fascist.”

The nine-term Congressman, who narrowly eked out re-election in 2018, has found himself on the ropes with the general election just around the corner. Even prior to his New York Times interview, decades of simmering allegations of racism had come to a head right before the midterms in 2018, after he promoted a white nationalist on Twitter and met with members of a Nazi-linked political party in Austria during a trip to Europe. As a result, he lost major donors including Intel, Land O’Lakes, and Purina.

He may be facing an uphill battle if he wants to get Republicans back on his side this time around. Last year, chairman of the National Republican Congressional Committee Ohio Rep. Steve Stivers issued a stern condemnation of King’s comments to the Times, and Iowa Gov. Kim Reynolds, a Republican, has said outright she won’t support his bid for re-election.

Homeless Moms Squatting in Vacant House Aren’t Going Without a Fight: ‘They Got to Take Me’