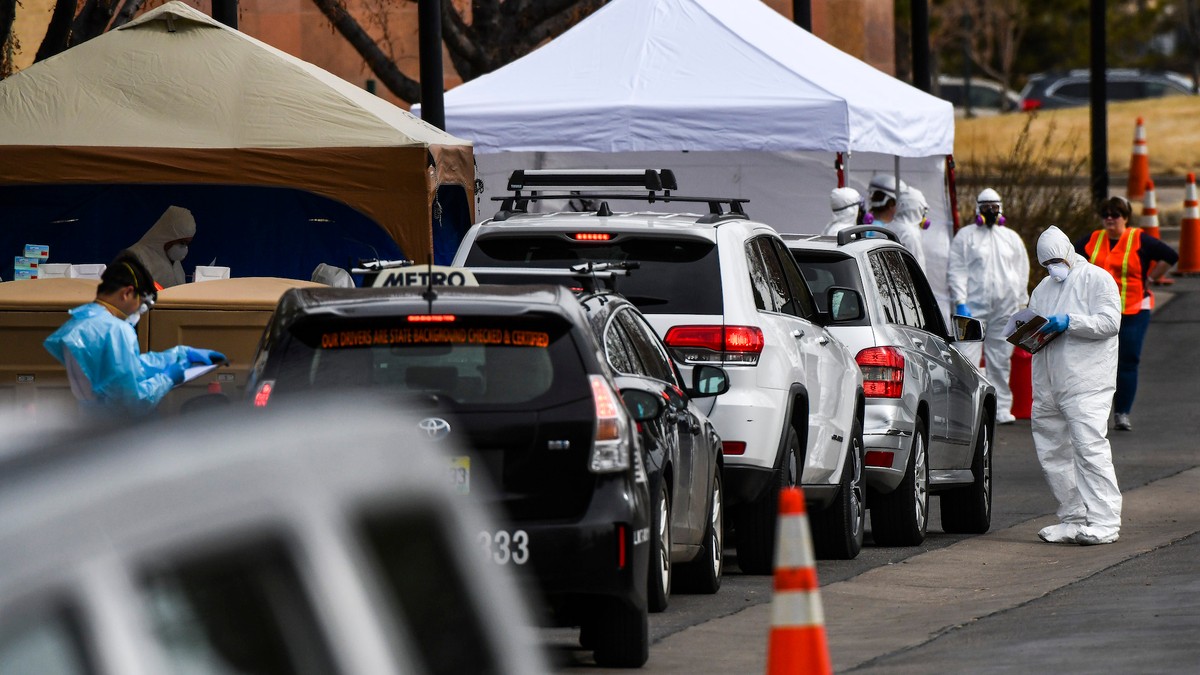 WASHINGTON — The Trump administration’s woefully slow rollout of COVID-19 testing has allowed the pandemic to spread undetected throughout the U.S. for weeks, forcing public health officials to do battle with an invisible enemy.

Now, after a late start, the U.S. might still need more than a month to produce enough tests to catch up with runaway demand, public health experts told VICE News.

“For the time being, the normal state is that there’s going to be more demand than supply,” said Dr. Eric Blank, chief policy officer for the Association of Public Health Laboratories, a group representing the government health labs that have handled the bulk of the testing in the U.S. so far. “We may not see demand meet supply for another month or so.”

The failure raises the likelihood of fresh hot spots erupting in American cities without warning. Epidemiologists say thousands, if not tens of thousands, of Americans have likely already been infected. But without extensive testing, it remains impossible to say for sure.

A “very conservative” estimate released this week by the Cedars-Sinai Medical Center put the total number of infected Americans easily over 9,000 people, or some 10 times the official number of cases confirmed by the Centers for Disease Control and Prevention, as of Wednesday.

An accurate picture of the pandemic’s spread remains vital both for calibrating a national response and slowing the spread of the disease by keeping sick people at home. President Trump’s sweeping, disruptive 30-day travel ban on foreign visitors from Europe will be an ineffective response, medical experts said, now that the virus is already circulating through America.

“It is a failing, let’s admit it,” Dr. Fauci said. “The idea of anybody getting [a test] easily, the way people in other countries are doing it, we’re not set up for that. Do I think we should be? Yes. But we’re not.”

Bungling at the CDC

Interviews with health experts and lab specialists this week painted a portrait of bungling, confusion and ill-preparedness at the federal level that’s kept infected Americans from getting tested.

The series of missteps left seasoned health experts scratching their heads about how the process has been so mishandled.

“I don’t understand why they are having so much trouble getting a workable assay [test] out the door in the first place.”

“I don’t understand it,” said Donald Milton, a professor at the University of Maryland’s School of Public Health and coronavirus expert. “I have tremendous respect for the people I know at CDC. They’re really sharp and capable people. I don’t understand why they are having so much trouble getting a workable assay [test] out the door in the first place.”

READ: Another NBA player has tested positive for the coronavirus

A key blunder occurred in February when the CDC sent malfunctioning test kits to state labs, setting back diagnostic lab work by a week to 10 days, according to Dr. Blank of the APHL.

“Our sense was that that process was rushed,” Dr. Blank said. “Some decisions were made that haven’t been thought through very well.”

CDC Director Robert Redfield admitted Wednesday that the test was developed “very rapidly,” and said the facility where the tests were produced may have been contaminated. He refused to say who was in charge of the process, however, or whether that person still is now.

As the CDC scrambled to fix the problem, the agency resorted to shipping samples back to Atlanta for processing. By late February, only 12 labs in five states were able to actually run tests, prompting backups that elicited howls of protest from state officials.

“CDC was a terrible bottleneck,” New York Governor Andrew Cuomo told a press conference Wednesday. “We had a tremendous pent up demand for tests.”

Facing limited supply, the CDC put tight restrictions on who could get tested, initially focusing on individuals who’d visited China and were showing symptoms. The agency eventually slackened that restriction as the administration rushed to make more tests available. But the resulting series of policy zigzags by the CDC and Food and Drug Administration left even healthcare providers bewildered about who should be tested.

“There’s been a lot of confusion and miscommunication about where people should go,” said Sara Rosenbaum, chair of the department of health policy at George Washington University School of Public Health and Health Services. “People call their doctor and the doctor says, ‘Go to the ER.’ Then the ER says, ‘No, go to your doctor.’”

READ: Europe is scoffing at Trump’s travel ban, which conveniently leaves out his golf resorts

On Wednesday, Cuomo declared New York is so frustrated with the Trump administration’s response that his state will start directly contracting with private labs.

“We’re not in a position where we can rely on the CDC or the FDA to manage this testing protocol,” Cuomo said.

This week, new concerns are emerging over a possible shortage of a key chemicals needed to actually use them known as “reagents.”

The company that makes them, Qiangen, says it’s put workers on three daily shifts, seven days a week, to crank out as much as it can. But experts are alarmed.

“We are deeply concerned that as the number of tests increases dramatically over the coming weeks, clinical labs will be unable to deploy them without these critical components,” the American Society of Microbiology said in a statement Tuesday. “Increased demand for testing has the potential to exhaust supplies needed to perform the testing itself.”

The trouble with not knowing

American testing remains so “completely inadequate” that fresh positives shouldn’t be seen as new cases, but as an indication of how far the disease has already spread, according to Harvard epidemiologist Marc Lipsitch.

The U.S. remains well behind other countries. The CDC has stopped reporting official topline testing figures as states and private companies get involved. But the total number of Americans who’ve received tests might be as low as 8,900 people nationwide as of Thursday morning, according to a tracker launched by The Atlantic and data scientist Jeffrey Hammerbacher. In the U.S., public health labs only extended diagnostic screening to all 50 states last Monday.

South Korea, which confirmed its first case at roughly the same time as the U.S., has ramped up capacity to 15,000 people per day and famously launched drive-thru testing facilities. The UK has screened some 27,476 people as of March 11. China may have managed to test 200,000 people per day.

On Wednesday night, Trump attempted to blame Europe for “seeding” American hot spots with “a foreign virus,” and argued that securing American borders would help fight the disease.

Experts scoffed at that idea. But they said research has shown that basic, day-to-day precautions do appear to slow the rate of new infections by a significant factor, one that multiplies over time to have a big impact in reducing the spread of the virus.

“The testing data doesn’t change what we all need to do,” Dr. Jonathan Braun, Professor of Medicine at Cedar-Sinai Medical Center told VICE News. “And that is, wash your hands, self-isolate if you’re feeling unwell, and avoid touching your face.”

Cover: Healthcare workers from the Colorado Department of Public Health and Environment test people for COVID-19 at the state’s first drive-up testing center on March 12, 2020 in Denver, Colorado. The testing center is free and available to anyone who has a note from a doctor confirming they meet the criteria to be tested for the virus. (Photo by Michael Ciaglo/Getty Images)

Biden Is Like, Check Out How a Normal President Would Handle Coronavirus

A Hockey Player Blamed Shrooms for His Brutal Attack on a Woman. It Worked