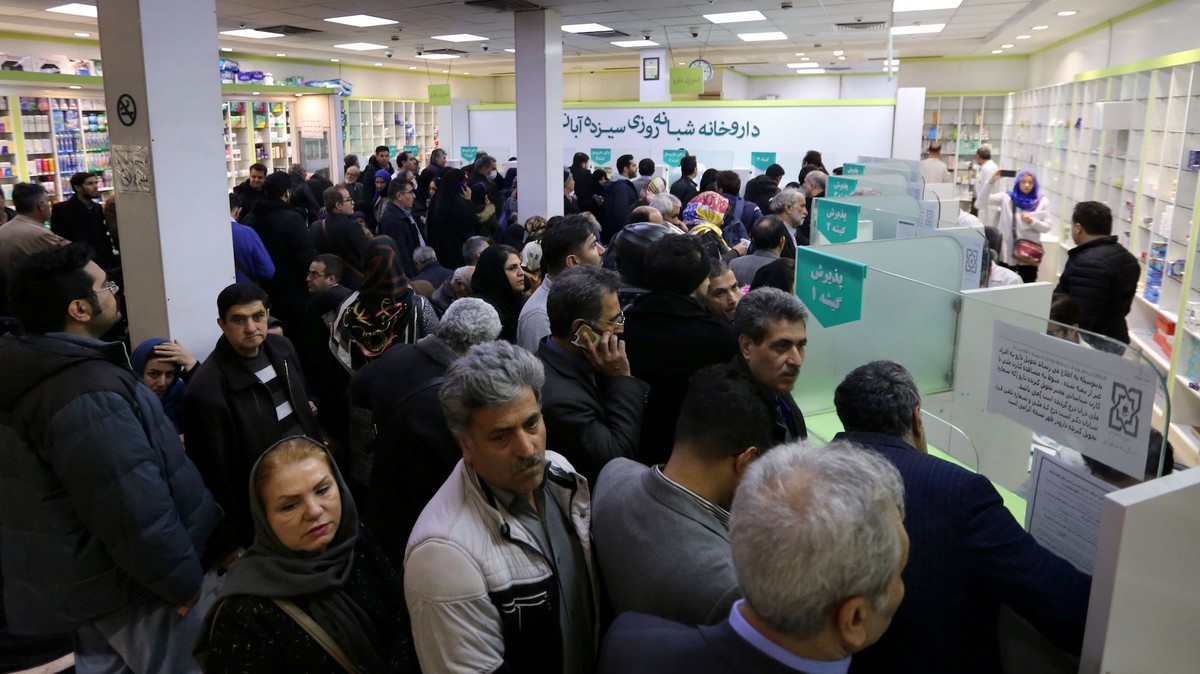 TEHRAN — The rain poured so hard on Nasser Khosro Street that even the drug dealers sought shelter. They stepped across large puddles as motorcycles with plastic windshields whizzed by. But these drug dealers weren’t selling heroin or cocaine. They were offering diabetes medication and injectable chemotherapy drugs.

U.S. sanctions have wreacked economic havoc on Iran for years, and President Donald Trump intensified them after Iran attacked an Iraqi base housing American soldiers in retaliation for Washington’s killing of Iranian military leader Qassem Soleimani in early January. The local currency has lost two-thirds of its value over the past two years. That means imported medicine to hospitals and pharmacies has become prohibitively expensive or not available at all. So Iranians turn to the black marketers of Nasser Khosro Street.

The street dealers assure customers that theirs is the highest-quality medicine made in Europe. It is smuggled into Iran through Turkey and northern Iraq, they say.

“You can check the bar code on the box to see its authenticity,” one dealer said with the bravado of a merchant selling overpriced carpets. He pulls out a cell phone, calls his supplier, and announces the price for the chemotherapy drug MabThera.

In 2013, during the Obama administration’s imposition of harsh sanctions on Iran prior to signing the nuclear accord, black-market MabThera cost $70 per 100 ml dose. Now the dealer offered it for $140. Used to treat lymphocytic leukemia, it normally requires eight doses over a period of weeks. That’s unaffordable to all but the very rich in a country where the average wage is $1,245 a month.

READ: ‘It’s a punch in the face to Trump’: Why Soleimani’s killing could mean hard-line victories in Iran’s elections.

And the dealer warns that the MabThera might not be available right away.

“I couldn’t even get cough syrup for my baby,” he said. “It’s getting very difficult for me, and I sell the drugs.”

SInce 2018 the Trump administration has steadily squeezed the Iranian economy with the stated goal of forcing Iran’s leaders to negotiate a new nuclear agreement. Sanctions aren’t intended to harm ordinary people, according to Trump officials.

The Trump administration has stopped most Iranian oil sales and cut the country off from the international banking system. So U.S. sanctions hurt ordinary Iranians, not just the elite, according to Paul Pillar, a former CIA officer and now an Iran expert at Georgetown University’s Center for Security Studies.

“Secretary of State Mike Pompeo and others in the administration favor regime change,” he said in a phone interview. “Therefore they do not shed any tears over hardships facing ordinary Iranians.”

The unilateral U.S. sanctions — together with Iranian mismanagement and corruption — have created massive economic problems. Inflation hit 26% in January and the economy shrank by 7.1% last year. The devaluation of the currency drives up the cost of anything purchased abroad, from car parts to industrial chemicals.

READ: The Middle East was already a powder keg of misinformation. Trump just lit the match.

At first Professor Reza Roosta Azad, the former chancellor of Sharif University of Technology, might seem a strange candidate to be shopping on Nasser Khosro Street. He and some fellow professors have set up a profitable private lab where they’re producing the enzymes that go into laundry detergents. He’s looking for chemical reagents to produce those enzymes.

Once he locates a source on Nasser Khosro Street, he gets a sample chemical and then uses sophisticated testing equipment back at his lab to check purity.

He pays twice the pre-sanctions price for the reagents but can sell the enzymes for 10 times more. “For entrepreneurs, it’s very good,” he said.

U.S. sanctions foster illegality, he explained, because the Iranian government knows people need the black market to survive. “The government looks the other way,” he said. “There’s no difference between legal and illegal at the moment because of the sanctions.”

There’s also a financial incentive, he added. Neither black marketeers nor grey-market business people pay taxes or face government inspection. If the companies do manage to buy or sell products abroad, they engage in what international banks would otherwise consider money laundering by hiding the origin of their wire transfers.

Iran has tried to become economically self-reliant, to create what officials call a “resistance economy” by manufacturing some medicines, medical equipment, and small appliances.

But the resistance economy has also led to the proliferation of underground factories. Roosta Azad cites the example of small workshops that produce fuel lines for cars. The lines heat up and cause car fires, he said.

His car had a fuel line that became so hot, he thought it would ignite. “For just a half meter of rubber, we can lose our car,” he said.

The government has also tried to lessen the impact of sanctions by stepping up trade with Russia and China, which strongly oppose unilateral U.S. sanctions.

And President Hassan Rouhani also introduced highly unpopular austerity measures in an effort to curb inflation. But when the government announced a tripling of gasoline prices last November, tens of thousands of people spontaneously protested.

Security forces cracked down and the government pushed through the price increase. Gas remains incredibly cheap by international standards, at 40 cents a gallon. But for truck drivers, taxi drivers, and middle-income people with cars, the increase was significant.

Faegheh Behdadfar, a single mom who works two part-time jobs, has stopped driving to work. “I drive my daughter to school, park the car, and then walk to work for 35 minutes,” said the resident of a relatively affluent neighborhood in north Tehran.

She admitted that walking is better for her health, although not during Tehran’s rain and snow storms. But U.S. sanctions caused Behdadfar much greater problems.

Her 15-year-old daughter, Maral Samea, is a top student, fluent in four languages, and had been accepted to a prestigious prep school in Canada. Last year Behdadfar paid for the first year’s tuition, the equivalent of $12,000, virtually her entire life savings.

When the family was unable to get visas to enter Canada, they wanted a tuition refund. The school tried to wire the refund through a Canadian bank, but it wouldn’t go through. The Trump administration pressures the international body that facilitates bank transfers, known as SWIFT, not to transfer money in or out of Iran. Most bank officials, worried about possible U.S. sanctions, judge it safer to stop Iranian wire transfers altogether.

READ: Iran’s answer to the Coronavirus outbreak: cut the internet.

Behdadfar flew to a third country, opened a bank account, and had to wait months for the transfer to go through. She was planning to fly to the third country and carry her refund in cash back to Iran.

Then the spreading coronavirus led airlines to cancel flights to Iran, and some countries banned Iranian entry altogether. So Behdadfar’s money is stuck in the third country, and she’s stuck in Tehran.

While both mom and daughter have many criticisms of Iran’s government, they blame Washington officials for their predicament.

“They ruined our lives,” said Behdadfar.

But Samea is studying Korean, and the family plans to use the Canadian tuition refund to enroll Samea in a South Korean university.

“We have to make change ourselves,” said Samea. “I’m always optimistic.”