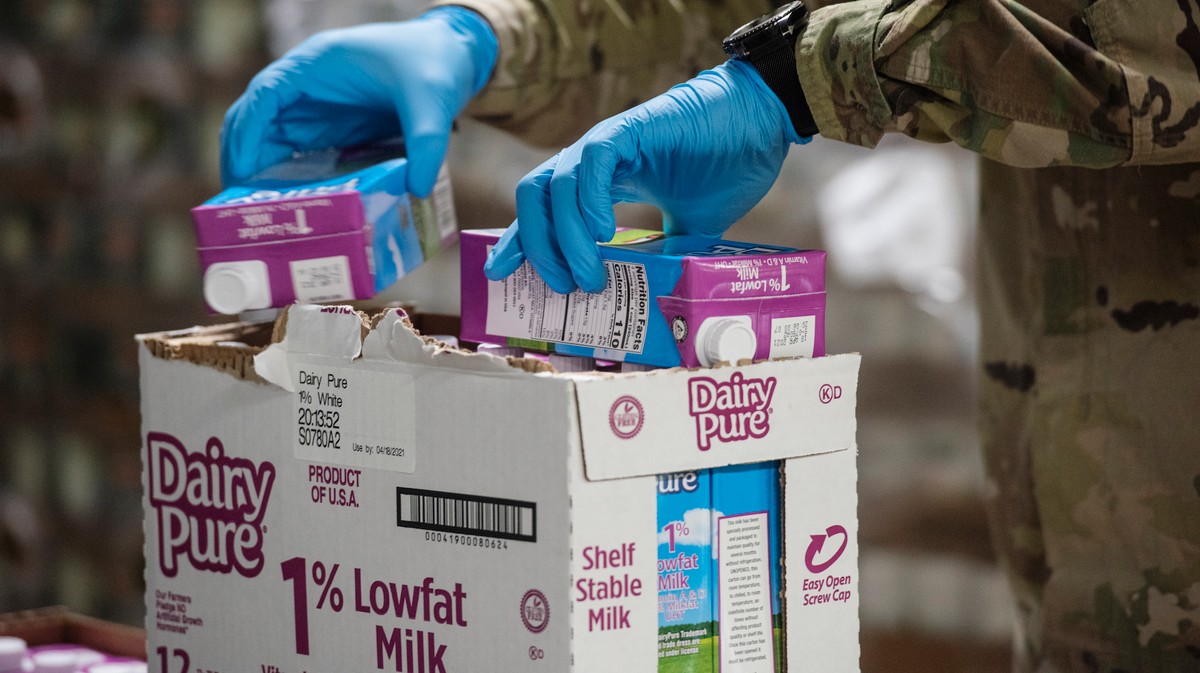 Truckloads of food come into the Second Harvest Foodbank of Southern Wisconsin every day. But it’s still not enough to feed all the people who’ve lost their jobs during the coronavirus pandemic.

Every morsel of food the bank receives immediately goes right back out to its distribution partners across 16 counties, and the organization is spending an extra $225,000 a week to keep its operations stocked. But the food bank’s warehouse is still bare enough to echo after sending out 100,000 pounds of food a day. Retail donations are dwindling, and with grocery stores struggling to fill their shelves, it’s getting difficult to find any reasonably priced product to buy.

“We’re not panicking, we’re not desperate, but we’re running real lean,” said Michelle Orge, the food bank’s CEO. “We’ve been able to pull it off so far, but we’re turning our full inventory in a week, with a lot of just-in-time deliveries, when we used to turn it every six weeks.”

Three food banks told VICE News they’re struggling to fill their inventories while their partners — often food pantries — report they’ve had to turn some people away. Food banks from Texas to Ohio have also seen shortages, but others in Oregon and California say they have enough to get by for now.

This week, 95% of food banks surveyed nationwide said they’re seeing increased need, according to preliminary data from Feeding America, a hunger-relief network of 200 food banks and 60,000 pantries. Demand for food is around 70% greater than usual, and an estimated 40% of clients are new to the food bank system. And more than half of food banks had already told Feeding America they were facing a smaller-than-usual inventory at the beginning of April.

“Food banks are kicking ass,” she said. “I wish we were able to kick more.”

Food banks emphasized those inventory shortfalls aren’t for any lack of trying on their employees’ parts. In an emergency situation like a natural disaster, food banks usually lean on their counterparts in other states to make ends meet. Those that have more food give it away — and wait for the favor to be returned in their hour of need.

But 22 million Americans have filed for unemployment in the past month, and every organization that serves the poor is being forced to broaden their safety nets to catch an almost impossible number of people. Few food banks are spared, and disturbing photos of overwhelmed pantries with seemingly endless lines have gone viral in recent days.

The Greater Baton Rouge Food Bank feels that same pain, according to Mike Manning, the organization’s CEO. His organization serves 11 parishes — some of them hit hard by the virus, which has ravaged nearby New Orleans. His bank is distributing all the food they’re getting, but it’s not enough to feed everyone asking for help — a situation he remembers only previously seeing after Hurricane Katrina.

And the fact that the people who qualify for unemployment insurance still aren’t getting it only makes demand greater, he said. The process to file for and receive benefits in his state and others has been slow, if not entirely broken, since so many lost their jobs all at once.

“We’re not used to having to do these kinds of volumes,” he said. “It’s a different situation than we’ve ever been thrust in before.”

In general, the supply chain that ensures food banks are well-stocked is breaking down. Manning and Orge have ordered truckloads of food that’ve been suddenly canceled. Retail grocers are also facing shortages of in-demand items as sellers cope with logistical bottlenecks and shifting needs. So the grocers don’t have excess product to give to the food banks. The food banks can’t do drives for donated items because that could further strain the grocery stores, and they can’t get excess product from restaurants, either, because those spots are mostly closed due to stay-at-home orders.

“If we can get food, we’ll go as long as we can,” Manning said. “My team is so focused. They don’t balk at working extra hours.”

On top of all the shortages, the food banks and pantries are bleeding volunteers. Manning’s organization, like others, has received help from the National Guard to get food out to hungry families.

At the Georgia Mountain Food Bank in Gainesville, executive director Kay Blackstock said her phone is “ringing throughout the day with people looking for emergency food assistance.”

But her freezers are dwindling with usually well-stocked items, like meat., and she’s having to lean on partner organizations in her state for help, along with Feeding America. She’s a hopeful person, she said, and believes the retail market will bounce back, but it’s still unsettling.

“We don’t have enough for everybody,” Blackstock said. “We are trying our best to keep our resources managed so that we can adequately supply those food pantries.”

As for Orge, she said some of the solution to her scarcity problem will come from the supply chain eventually adapting to the coronavirus pandemic. And, of course, it’d help to have more money to buy food. But that moment can’t come soon enough for the people who “didn’t get the food they wanted today.”

“Food banks are kicking ass,” she said. “I wish we were able to kick more.”

The Squad Has a Plan to Cancel Your Rent