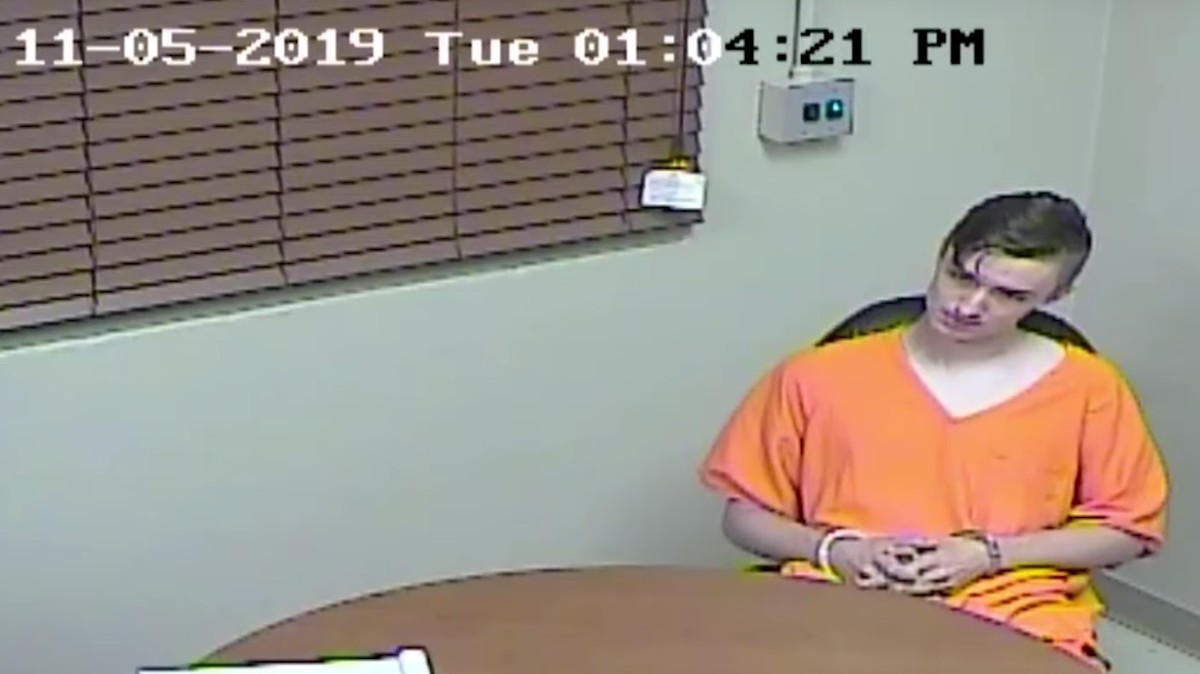 A suspected member of the violent neo-Nazi group Atomwaffen has pleaded guilty to federal charges of smoking weed regularly while possessing guns.

Aiden Bruce-Umbaugh, 23, was arrested after a traffic stop in Texas last November. He was wearing tactical gear at the time, and law enforcement found a huge cache of weapons, ammo, a canister of marijuana, and THC oil in the car.

Federal prosecutors released videos this week showing him handcuffed and clad in an orange jumpsuit, talking to investigators after he was taken into custody.

“I have a feeling you guys aren’t here to talk to me about weed,” Bruce-Umbaugh said.

“What do you think we’re here to talk to you about?” the interviewer asks.

“Well, I assume you’re here because of my swastika flag and firearms,” he replies.

Bruce-Umbaugh’s case is yet another example of how federal prosecutors, in the absence of a domestic terror statute, have to stress the potential dangerousness of a neo-Nazi defendant, even if they’ve only been arrested for minor crimes. Prosecutors describe him as a “dangerous individual” due to his alleged affiliation with the Atomwaffen Division. He’s facing a maximum sentence of 10 years in federal prison — and whether he gets the max will depend on whether the judge agrees with prosecutors’ characterization of him.

Atomwaffen was founded in 2013 by a group of young white men who met on the neo-Nazi forum Iron March. The group ascribes to a disturbing philosophy called accelerationism, which promotes violence in order to speed up the collapse of society. Members of the group have been linked to at least five murders across the U.S, and have ties to similarly-aligned neo-Nazi groups in Europe, Ukraine, and Canada.

When Bruce-Umbaugh was stopped in November, he was in the car with Kaleb Cole, who’s believed to be a leader of Atomwaffen. The two were pulled over for speeding in the city of Post, Texas. During the traffic stop, deputies noticed a large knife in the middle console and questioned the pair further.

According to court documents, Bruce-Umbaugh, who was in the passenger seat, “avoided eye contact,” conducted “limited conversation” with deputies, and initially denied having anything illegal in the car.

When he was taken in for further questioning, he admitted that the two AK-47s, AR-15, 9mm pistol, and canister of marijuana belonged to him — and said he smoked weed on a daily basis.

In addition to the gun and weed evidence, prosecutors filed additional materials to demonstrate the dangerousness of Atomwaffen, including video footage from one of their highly stylized propaganda videos. In the video, unsealed this week, members are seen practicing firearms training and hand-to-hand combat at their self-described “hate camps.” They’re also wearing their trademark “siege masks” (a skull mask covering the bottom part of their face) and burning various flags, including the U.N., Black Lives Matter, Blue Lives Matter, and Israel.

During Bruce-Umbaugh’s detention hearing in November, federal prosecutors played recordings from jail house calls placed by him, including one in which he describes himself as a Nazi and discusses a photo taken of him and Cole at Auschwitz concentration camp in Poland.

Cole had previously been questioned by authorities but not charged with any crimes. In October, a month before he was pulled over, officials in Kings County, Washington, seized his firearms under the state’s red flag law, arguing that he was preparing for “a race war.”

On Dec. 16, after their traffic stop, a prosecutor in King’s County issued a warrant for his arrest on charges of “unlawful possession of firearm by person prohibited by extreme risk protection order.” The warrant is still outstanding and his whereabouts aren’t known. King’s County officials have said that they believe he’s still somewhere in Texas.

Cover image: Video of Aiden Bruce-Umbaugh in custody. (Courtesy of the U.S. Attorney’s Office for the Northern District of Texas)

People Keep Getting Killed in El Salvador After Being Deported From the U.S.