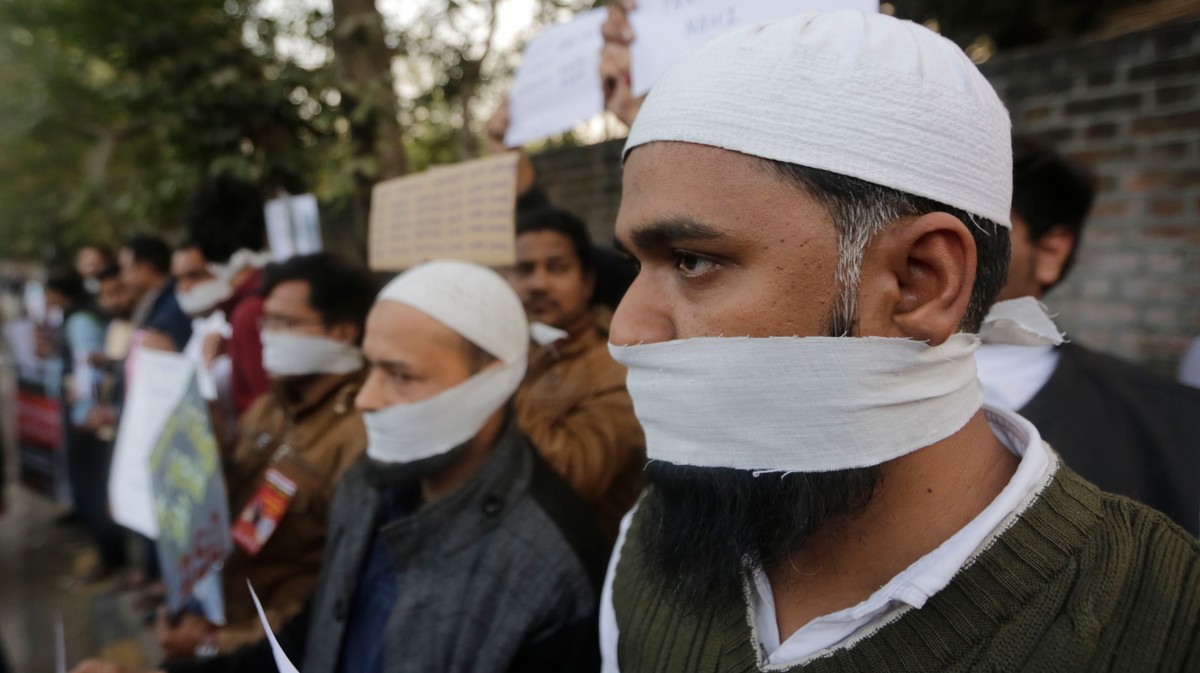 An Indian university has become the latest battleground between emboldened Hindu nationalists and their opponents, after a masked right-wing mob stormed the campus and attack dozens of students and teachers.

Sunday’s attack, in which more than 30 people were assaulted while police stood by, has triggered nationwide outrage and sparked protests at universities across the country. On Tuesday, anger grew at the news that police had laid charges against a left-wing student leader who was beaten during the rampage — but failed to arrest any of her attackers.

Aishe Ghosh, president of the student union at Delhi’s Jawaharlal Nehru University, was among those injured when the mob — wielding sticks and iron rods, and shouting pro-government Hindu nationalist slogans — rampaged through the campus for about three hours. Ghosh, who had been protesting against a fee increase announced by the government, was filmed bleeding heavily from head injuries in the wake of the attack, saying: “I have been brutally beaten up.”

But rather than arrest the attackers, police announced Tuesday they had charged Ghosh and 19 others with vandalizing the university’s server room and attacking security guards as part of their protests against the fee hike. While police have launched an investigation of the mob assault, filing a complaint against unidentified people for rioting, no arrests have been made — despite police having been filmed at the scene when the attackers left the campus.

The police response has sparked widespread criticism, amid growing concerns that the authorities are turning a blind eye to abuses by hardline nationalist groups with ideological links to Prime Minister Narendra Modi’s ruling Bharatiya Janata Party.

Since coming to power in 2014, Modi has pursued an unabashedly Hindu nationalist agenda, and has been criticized for emboldening hard-liners and seeking to marginalize the country’s Muslim minority from public life.

Journalist Barkha Dutt tweeted that it was “shameful” that the charges had been laid against Ghosh but not her attackers.

“Police that looked the other way while masked vandals beat students and teachers with iron rods have filed a case against Aishe Ghosh, whose head was thrammed with said rod, while filing [a complaint] against unidentified people in the main case of assault,” she wrote.

Human Rights Watch’s South Asia director, Meenakshi Ganguly, said in a statement that teachers and students on the campus had “begged the police to intervene during the attack” but that the police had “simply stood and watched the attackers walk away.”

She contrasted the police’s inaction against the pro-government mob Sunday to its heavy-handed response to students protesting the government’s contentious changes to the country’s citizenship laws last month, which saw armed police enter a campus and injure students with long batons.

“All too often police in India use excessive force and arbitrarily arrest peaceful critics of the government, but are derelict in their duty to maintain law and order when violent ruling party supporters are involved,” she said.

Ghosh and other students have blamed a nationalist student group, the Akhil Bharatiya Vidyarthi Parishad (ABVP), for Sunday’s violence, which has triggered protests across universities in the country. The group is affiliated with the Rashtriya Swayamsevak Sangh, a Hindu nationalist paramilitary movement that’s considered the parent organization of Modi’s ruling BJP party.

The ABVP has denied it played any role in the violence, instead blaming “left goons” for the attacks and claiming 25 of its own members were injured. The BJP condemned the violence, and appeared to blame opposition parties, calling the unrest a “desperate attempt by forces of anarchy, who are determined to use students as cannon fodder, [to] create unrest to shore up their shrinking political footprint.”

Meanwhile Ghosh said Tuesday she was confident of being acquitted of the charges against her, and questioned why charges hadn’t been laid against the perpetrators of Sunday’s violence.

“I have not done any violence. The police first need to have proof against me to take action,” she said in an interview with India’s NDTV.

Cover: Indians cover their mouths during a protest against Sunday’s assault by masked assailants at New Delhi’s Jawaharlal Nehru University, in Delhi, in Ahmadabad, India, Monday, Jan. 6, 2020. Masked assailants beat students and teachers with sticks on the campus of the prestigious university in India’s capital, injuring more than 20 people in an attack opposition lawmakers are trying to link to the government. (AP Photo/Ajit Solanki)

Australia’s Wildfires Could Wipe Entire Endangered Species Off the Planet

Congress Could Take Back Trump’s Power to Wage War. But It Won’t.