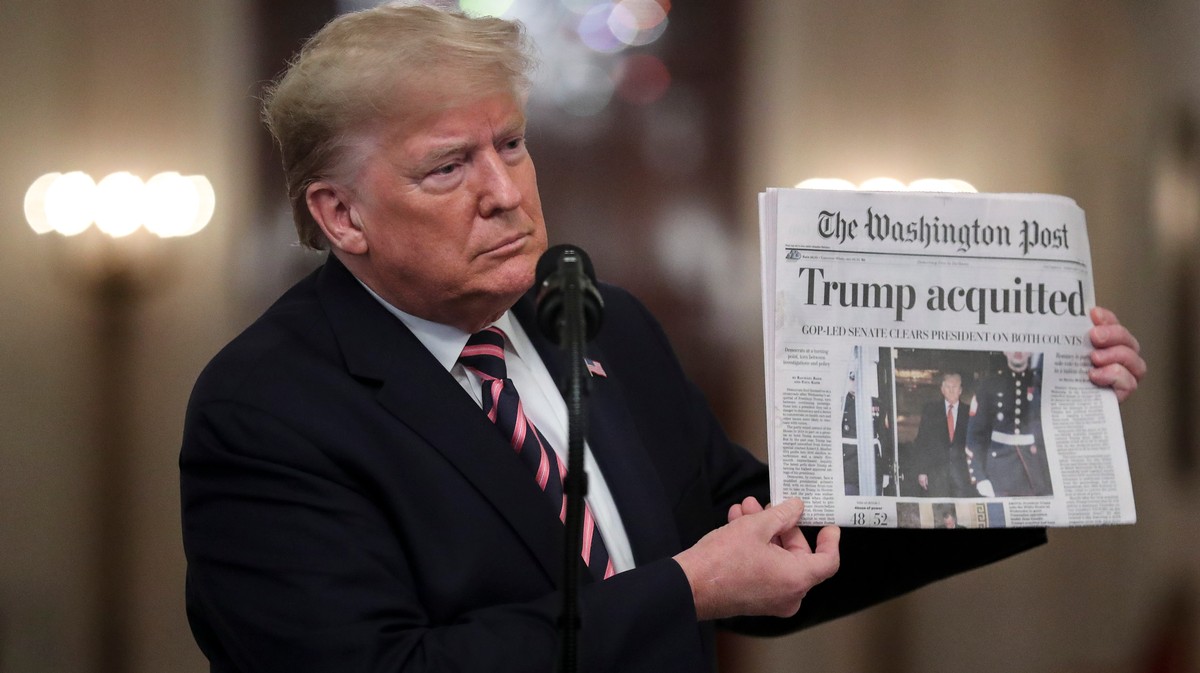 WASHINGTON — President Trump doesn’t exactly look like a man who has “learned” anything from being impeached, despite GOP Sen. Susan Collins’ insistence to the contrary.

Certainly not judging from the tub-thumper of a party Trump threw on Thursday afternoon for members of Congress who helped him beat the rap. In an hourlong White House appearance that he insisted wasn’t a press conference or a speech, the president continued his victory lap from the night before, hurling venomous insults at his enemies and heaping praise on his allies and lawyers.

“It’s a celebration,” Trump declared, staring out at the room packed with his most hardcore supporters in Congress and his Cabinet. “We went through hell.”

The blowout came less than 24 hours after his GOP backers in the Senate voted to acquit him on both impeachment charges leveled by House Democrats. They’d accused the president of abusing his office by pressuring Ukraine for help trying to cheat in the 2020 election.

Even some Senate Republicans who voted to acquit labeled Trump’s behavior “improper” or “wrong,” in light of the “overwhelming” evidence the president had withheld vital military aid from a nation at war to force an investigation of Trump’s political rival, Democrat Joe Biden. (Mitt Romney of Utah had the dishonor, at least in the eyes of Trump’s supporters, of being the sole Republican to vote guilty in the Senate.)

After a party (with red wine and well-done steak) at his D.C. hotel immediately following the vote, Trump took another victory lap Thursday at the White House. And he repeated, as he has throughout his impeachment saga, that he did “nothing wrong.”

“It was evil, it was corrupt, it was dirty cops, it was leakers and liars,” Trump glowered. “This should never, ever happen to another president. Ever. I don’t know that other presidents would be able to take it.”

After strutting up to the microphone to the tune of “Hail to the Chief,” Trump held aloft a copy of the day’s Washington Post, with the front-page banner headline “Trump acquitted.”

He lumped impeachment together with the two-year Russia investigation, led by former Special Counsel Robert Mueller, and labeled both part of an overarching “witch hunt” against him.

READ: It’s Over: Trump Acquitted of Impeachment Charges by the Senate

Trump also took aim at former FBI Director James Comey, who oversaw the early stages of the investigation into Russian meddling in the 2016 election and whose surprise firing by Trump prompted Mueller’s appointment.

“When I fired that sleazebag [Comey], all hell broke out,” Trump crooned.

Trump didn’t spare Rep. Adam Schiff either, the California Democrat who led the charge to remove Trump from office in the Senate trial that ended Wednesday. And he insulted Democratic House Speaker Nancy Pelosi, who made headlines and prompted memes after she ripped up Trump’s State of the Union speech earlier this week.

Then came the shoutouts. Lots, and lots, of shoutouts.

Trump spent much of his “celebration” handing out personal attaboys to the members of Congress who’d defended him most tenaciously in spite of the mountain of evidence of his guilt — including Rep. Jim Jordan of Ohio, Rep. Devin Nunes of California, Rep. Doug Collins of Georgia, and plenty more.

The room ate it up. Members of Congress stood and gave slight bows when Trump singled them out. They hooted and cheered and laughed at his jokes.

Trump, who spent the morning at the National Prayer Breakfast, had special disdain for Romney, who explained his guilty vote by saying he was following through on his oath to God to do impartial justice.

Trump presented Romney’s stance as mere sour grapes, after Romney’s unsuccessful 2012 bid for the presidency as the GOP nominee, and scoffed at his professed faith.

“Then you had some that used religion as a crutch,” Trump said. “Never heard him use it before.”

Cover image: President Donald Trump holds a newspaper as he speaks during an event celebrating his acquittal on the east Room of the White House on February 6, 2020 in Washington, DC. (Photo by Oliver Contreras/SIPA USA)(Sipa via AP Images)