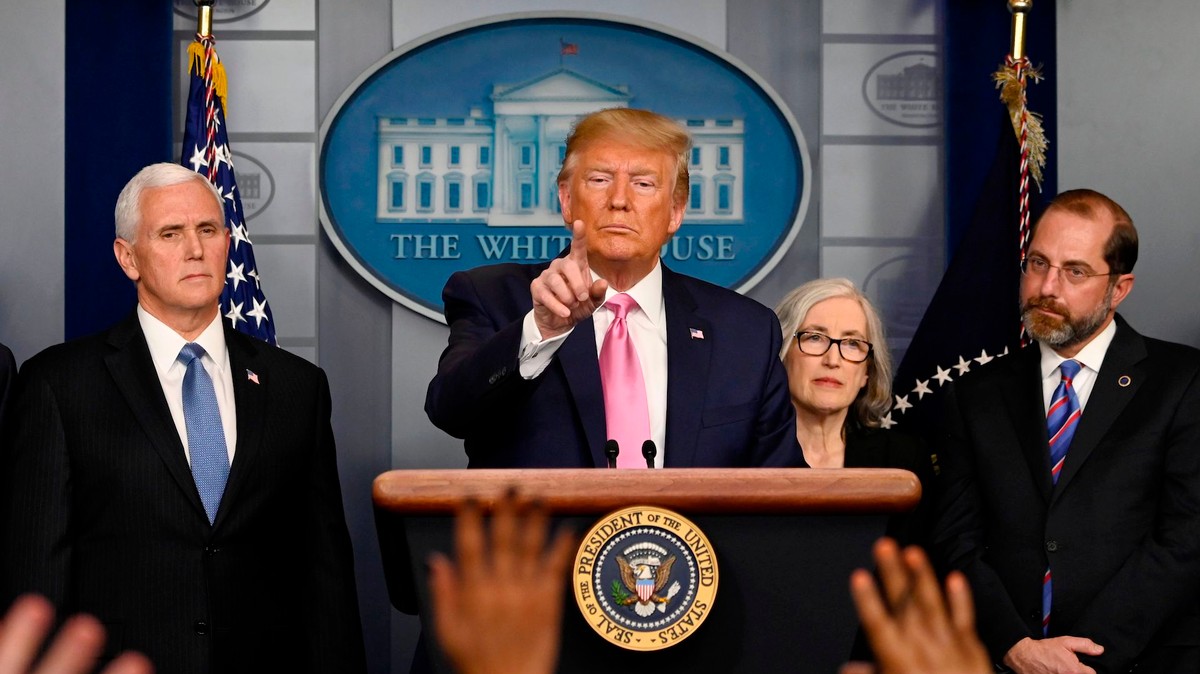 After three days of tumbling stocks, a steady stream of negative news stories, and withering criticism from lawmakers of all stripes, President Trump took to TV screens Wednesday to defend his administration’s response to the coronavirus.

He then placed Vice President Mike Pence in charge, which appeared to be news to Health and Human Services Secretary Alexander Azar.

The administration has asked for only $2.5 billion in emergency funding, which the president said is “a lot” in the high-profile press conference at the White House. Then he jumped in front of GOP leaders at the Capitol by basically agreeing to Senate Minority Leader Chuck Schumer’s new call to allocate $8.5 billion to combat the virus.

“We’ll take it. We’ll take it,” Trump told reporters. He then pivoted into the unscripted question-and-answer portion and called Schumer “Crying Chuck Schumer” before he accused House Speaker Nancy Pelosi of “trying to create a panic.”

But lawmakers in both parties accuse Trump — and many of the seven officials who flanked him during the presser — of causing the panic because of the numerous conflicting messages that have come from the president, his Cabinet and public health officials.

“You just have to wonder: Does the right hand know what the left hand is doing? Are they in sync from the White House to his Cabinet secretaries?” Rep. Cheri Bustos (D-Ill.) told VICE News while walking on the Capitol grounds. “I question – based on all of the different information that’s coming from all over the place – whether they know what’s going on.”

“Ebola long term is a real threat. And it’s a much more dangerous disease.”

“Ebola long term is a real threat. And it’s a much more dangerous disease, from everything we know, than coronavirus is. The death rates are much higher. I don’t think we should disrupt [that funding],” Rep. Tom Cole (R-Okla.), a senior member of the House Appropriations Committee, told VICE News outside the coronavirus hearing. “We need emergency funds now [for coronavirus]. Let’s vote on the emergency funds, the same way we would with any other natural disaster.”

The hearing came another related one earlier in the week where Chad Wolf, the acting head of DHS, which has been tasked with coordinating the federal response to the virus, faced a rare public rebuke from Sen. John Kennedy (R-Louisiana). After Wolf told the senator he didn’t know how many Americans coming back from cruise ships have the virus, the senator grew indignant.