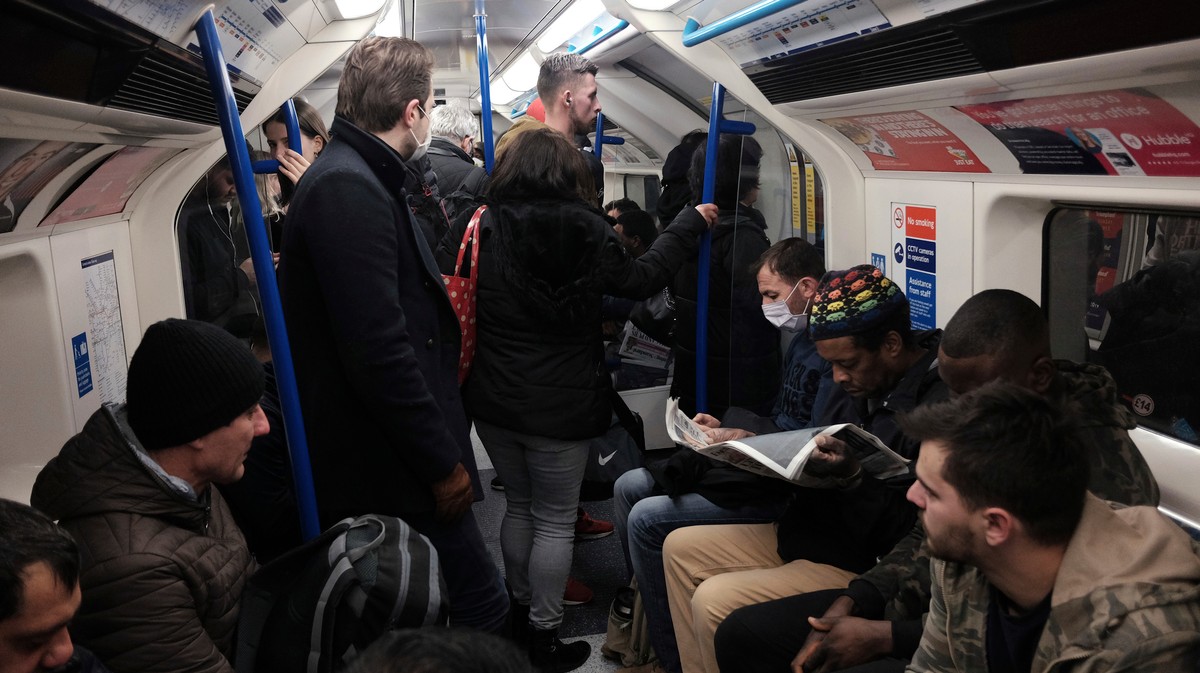 Britain’s government announced an unprecedented public lockdown Monday night in a bid to slow the spread of the coronavirus. But the new restrictions have done nothing to stop overcrowding on London’s trains, buses, and subways, where social distancing remained impossible during rush hour Tuesday.

The new restrictions required people to stay at home, closed non-essential shops and public spaces, and banned gatherings of more than two people in public. But they’ve been widely criticized as coming too late and failing to stop the crowds on public transit. Reports of the packed transport links — where crammed commuters were unable to keep the advised 6.5 feet (2 meters) from each other — prompted London Mayor Sadiq Khan to issue an ultimatum Tuesday for Londoners to “stop all non-essential use of public transport now.”

“I cannot say this more strongly,” he said. “Ignoring these rules means more lives lost. Some of the people on the Tube yesterday and today are not essential workers, I can tell you that.”

In London, the epicenter of the U.K.’s outbreak, officials have kept public transport operating on a reduced service to allow workers in essential industries, like the health service, police, and food supply, to get to their jobs. But health workers heading to their jobs in London hospitals complained Tuesday that the city’s public transport links remained packed — despite instructions from the government to travel to and from work “only if it is absolutely necessary.”

“I love my job, but now I’m risking my health just on the journey in?!” tweeted Nicola Smith, a sonographer at a central London hospital. She called on officials to increase the frequency of services or to restrict those using it.

Julia Harris, a London nurse, told PA news agency she had left earlier and changed her route to try to avoid crowds but still found the trains busy.

“Seats on the train all had at least one person so people needed to stand,” she said. “I still don’t think things have improved.”

READ: British doctors are begging the government to test them for the coronavirus

Transport union TSSA called for police to be deployed at major train stations in the capital to make sure that only passengers who were providing key services were commuting.

The crowding has been blamed on the government’s refusal to close construction sites, a reluctance from some business owners to close, and reduced frequency of public transport services. Critics have called for London transport bosses to increase the frequency of public transport services to reduce crowding, but Khan said Tuesday that the spread of the virus among staff had made that impossible. One-fifth of transport workers are off work because they were unwell or self-isolating.

Despite that, Health Minister Matt Hancock blamed London’s transport authority, which is run by Khan, for failing to run the Tube service at full capacity.

“The first and the best answer is that Transport for London should have the Tube running in full so that people traveling on the Tube are spaced out and can be further apart,” he told a news conference.

“There is no good reason in the information that I’ve seen that the current levels of Tube provision should be as low as they are. We should have more Tube trains running.”

Many commuters still using public transport are construction workers — mostly self-employed contractors working on sites that the government has allowed to remain open amid the wider lockdown. That decision has prompted widespread criticism from construction unions, workers and their families, and even London’s mayor. Calls to #shutthesites are also gaining traction on Twitter.

Khan told LBC radio Tuesday that he had argued with the government that construction workers should be ordered to stay home but had been overruled.

The British government has promised to pay up to 80% of the paychecks for salaried workers, to protect jobs being lost during the pandemic. But the guarantee doesn’t extend to the self-employed, which leaves construction workers feeling pressured to go in to work to earn a living, despite fears of bringing the virus home to infect their families.

An organizer for a train drivers’ union warned that allowing construction workers to continue to crowd onto trains with health workers would be disastrous.

“If the Government doesn’t shut construction sites and pay self employment, people will die,” tweeted Finn Brennan, an organizer for the Aslef union.

Other companies, such as the giant sporting goods retailer Sports Direct, have tried to argue their workers are essential to remain open during the lockdown. Shortly after Johnson’s announcement Monday night, the firm’s management wrote to staff that they would remain open as selling fitness equipment made them an essential service.

“Against the backdrop of the closure of gyms the demand for these types of products has increased exponentially as the population looks to maintain a healthy lifestyle,” read the email from chief finance officer, Chris Wootton. “Consequently, we are uniquely well placed to help keep the UK as fit and healthy as possible during this crisis.”

The company backed down after Cabinet Office Minister Michael Gove said Tuesday that the company’s management was wrong and that they had now “got the message.”

The issue is just the latest problem to arise in Britain’s response to the coronavirus outbreak, which has killed 422 people so far. The government has been criticized for imposing restrictions much more slowly than countries in Continental Europe. It initially adopted a strategy of allowing the virus to spread at a so-called “manageable” level, before suddenly changing course last week when modeling showed that could result in hundreds of thousands of deaths.

Despite the criticism, a snap poll by YouGov found overwhelming support for the lockdown measures, with 93% of respondents in favor.

Cover: Coronavirus. A packed carriage full of passengers travelling on the Victoria line of the London Underground tube network, after Boris Johnson ordered pubs and restaurants across the country to close tonight as the Government announced unprecedented measures to cover the wages of workers who would otherwise lose their jobs due to the coronavirus outbreak. Picture date: Friday March 20, 2020. (Press Association via AP Images)

Trump Says He Wants to Lift Coronavirus Restrictions ‘by Easter’