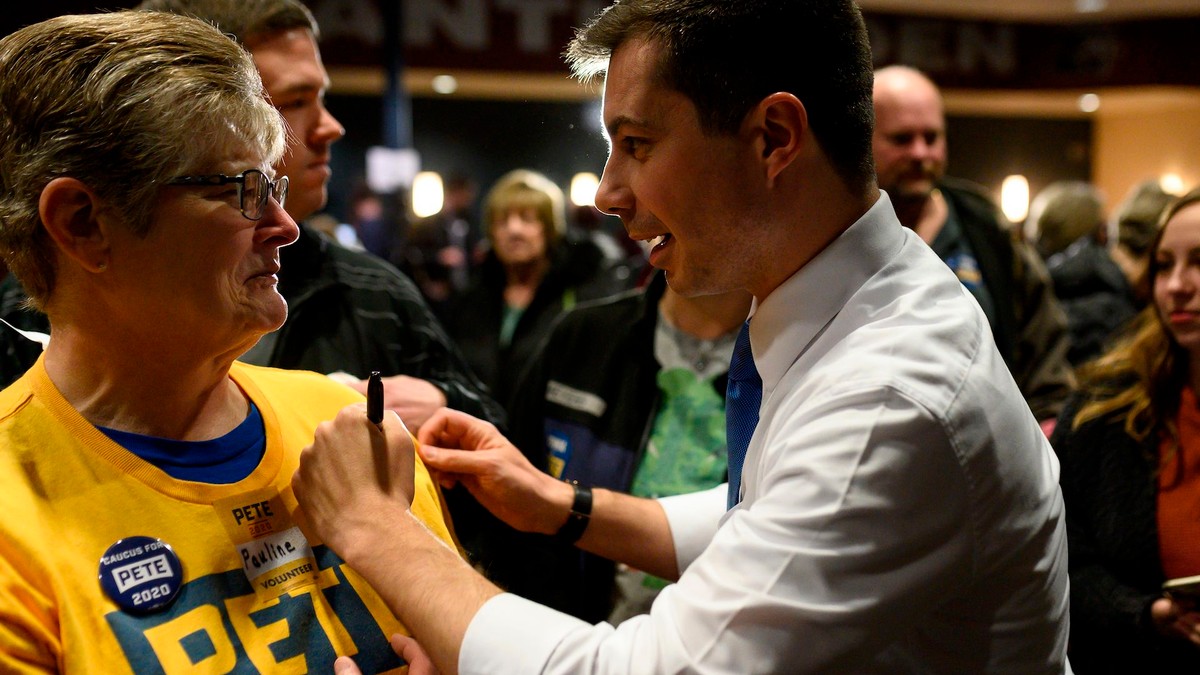 Subscribe here on Spotify for the full episode of “Uncommitted: Iowa 2020,” a new podcast from VICE News.

As he walked out to a crowd of over a hundred people at a fairground venue here on Tuesday afternoon, Buttigieg told the crowd that he spent New Year’s in the small town when he worked as an Obama staffer in 2008.

“I believe Iowa is poised to help us make history one more time,” he said from a small platform as a yellow and blue Iowa map emblazoned with “Iowa for Pete” loomed in the background. He delivered a short stump speech with an optimistic tone of what America should be in the post-Trump era, and touted his Midwestern roots.

Several voters that VICE News spoke with at his events in Osceola and Indianola cited Buttigieg’s “fresh face” and “energy” as his appeal, qualities that made a young senator named Barack Obama stand out to Iowans more than a decade ago.

READ: This is what Iowans really care about ahead of the caucuses

Osceola, which is in Clarke County, voted for Barack Obama in the 2008 presidential election by 49.8%, then flipped to Donald Trump in the 2016 contest by a much larger margin of 60.2%. Buttigieg’s campaign has employed a strategy in the final weeks leading up to the caucus to purposefully send the candidate to these Obama-to-Trump counties in an attempt to woo conservatives to their side.

It may be working. Shawn Keller, a 30-year-old farmer wearing a “Make America Great Again” hat, isn’t a Buttigieg “fan” per se, but he came out to hear his message.

Erin Cole, 55, attended the event with his wife, Cindy, 58, from Ellston, Iowa. Clutching a campaign sign, he told VICE News that he is still undecided on who he’ll caucus for but has recently moved away from Bernie Sanders and into the Buttigieg camp.

“I would like a candidate that my brothers could vote for and I think Pete is more likely to appeal to them.”

“I would like a candidate that my brothers could vote for and I think Pete is more likely to appeal to them,” the retired actuary said. “They’re Republicans and I think probably both voted for Trump and are still Trump supporters so, I guess I would like to find somebody who could appeal to them so if they wanted to jump off the Trump train, it didn’t feel quite so painful.”

Both of the Coles think Buttigieg can beat Trump — and Erin in particular thinks he can build a broader coalition that includes conservative voters.

“Most of the candidates have very good plans. I don’t think there’s so much distance between them so I think we have a lot of candidates that want to do the right thing,” he said. “For me it’s more a question of who can talk to the other side. And for Mayor Pete it’s a very deliberate act for him to be able to talk to everyone. I think that goes a long way for after, if he gets elected.”

Buttigieg has enjoyed a spectacular run in Iowa but there are signs that the Iowa campaign comes a close his support is leveling off. In the latest Monmouth University Poll out on Wednesday, 16% of likely Democratic caucus-goers in Iowa indicated that they would support the former mayor. Former Vice President Joe Biden and Senator Bernie Sanders were in a statistical tie with 23% and 21%, respectively. Warren follows at 15% and Klobuchar at 8%.

At his final stop of the day in Indianola, Iowa, south of Des Moines, Buttigieg drew a larger crowd for a town hall in the campus center at Simpson College. Warren County, where Indianola sits, also went for Obama by a slim margin in the 2008 presidential race, and then flipped to Trump in 2016.

“For me it’s more a question of who can talk to the other side.”

When Buttigieg asked the crowd to envision a day when Donald Trump was no longer president, he was met with loud applause.

After a 10 minute stump speech, he took questions on issues like the housing crisis, climate change and the Austrailian wildfires, and protecting the rights of transgender women of color.

Eighteen-year-old student Diana Sagastizado is leaning towards caucusing for Buttigieg and loved his message at the event. Half El Salvadorian, she considers immigration the biggest issue in this upcoming election.

“Personally I believe that if we want to get Trump out of the office, we need a candidate that has what Pete has, which is that moderate ideology,” she said after the event as her friends stood nearby. She “loves” Senator Sanders, but doesn’t think he’s what the country needs right now.

“He’s [Bernie’s] really problematic to the party,” she said. “He splits Democrats, which is something that Pete doesn’t do. He actually brings a lot of people together on both sides of the spectrum.”

Maribeth Wright, 54, who lives in Norwalk, Iowa, told VICE News after the Indianola townhall that her husband, a registered Republican, will be switching parties to cast a vote for Buttigieg.

“My husband is a Republican but he didn’t vote for Trump. He was not a Trump fan but he is caucusing for Pete. He’s going to switch Monday night. He likes Pete’s values, he likes what he’s saying and wants that middle-road type politician.”

A Cop Was Charged With Murder Less Than 24 Hours After a Shooting. Here’s How Rare That Is.

A Hypersonic Shockwave: What Would Happen if These Two Satellites Collide