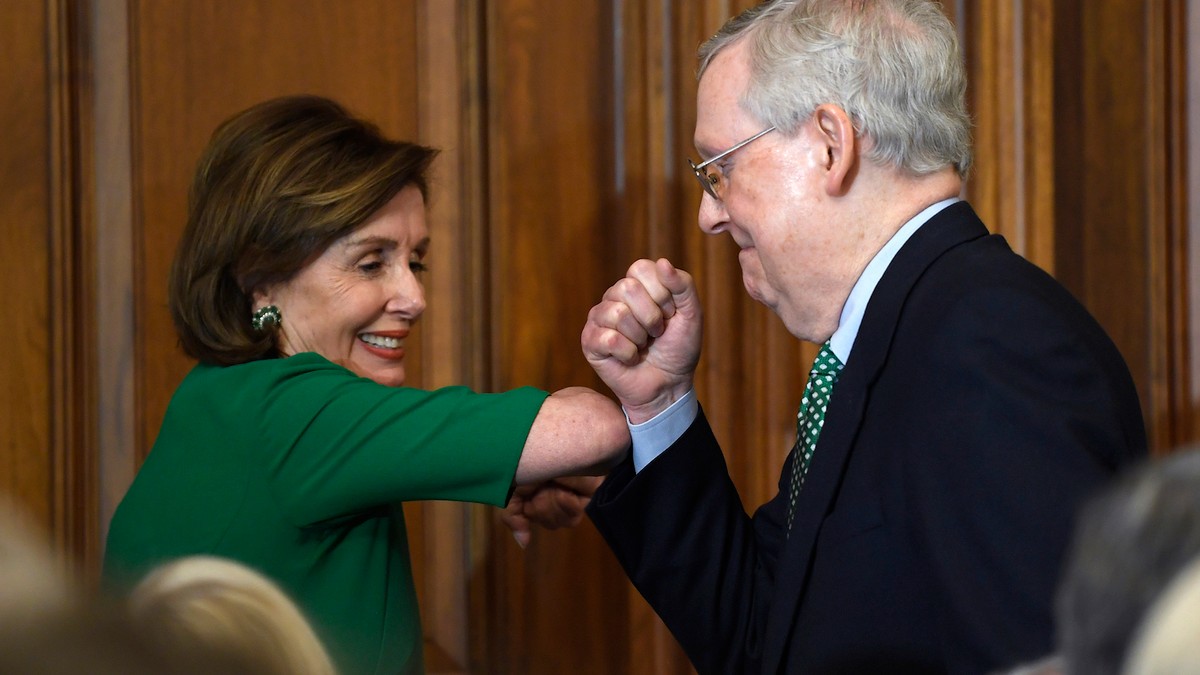 WASHINGTON — A rare GOP ally of Sen. Elizabeth Warren (D-Mass.) is being closely considered for one of the most high-profile and politically explosive jobs of the coronavirus era: Watching over how the federal government distributes trillions in rescue funds.

The decision is far from final, but Bair is the first name to emerge from a selection process shrouded in secrecy, in which bitter rivals Pelosi and McConnell must agree on a single name. Bair is among the very few who wouldn’t be immediately rejected by either camp, the people said. Pelosi and McConnell spoke with each other about the decision on Monday, and agreed to exchange lists of names this week from which to create the final shortlist, Pelosi’s office confirmed to VICE News.

The selection is important because the chair would not only lead the commission but also effectively become the tie-breaker for its toughest decisions. Each of the other four members of the committee are partisans, and were appointed individually by the top four Congressional leaders: Pelosi, McConnell, Senate Minority Leader Chuck Schumer and House Minority Leader Kevin McCarthy.

But bitter rivals Pelosi and McConnell have to agree on a single name for the chair. Few people on earth have both the expertise and potential bipartisan appeal in President Trump’s deeply divided Washington. And Bair is one of them.

Picking Bair would help give the panel real teeth by putting a deeply experienced financial regulator in charge of investigating how President Trump’s Treasury Department and Federal Reserve hand out vast sums intended to save the U.S. economy from collapse. And it would also mean that two out of five of the commissioners would have close links to Warren, the liberal senator famous for her tough stance against Wall Street misbehavior.

Another commissioner chosen by Schumer, Bharat Ramamurti, is a former Warren staffer who led efforts to investigate banking giant Wells Fargo in 2016.

Taking the job also risks provoking Trump’s ire. Trump has effectively declared war on those attempting to dig up information about his administration’s response to the coronavirus, and declared no one needs to watch over his shoulder because, he said, “I’ll be the oversight.”

Now, his Fed and Treasury have been tasked with overseeing lending programs that could easily decide which American corporations survive or fail in the downturn caused by the contagion, while the commission holds hearings on their effectiveness. The first of the commission’s regular reports to Congress is already due within the next two weeks.

It’s entirely possible that someone as qualified as Bair would decide not to accept what might be among the most thankless jobs in Washington.

There are plenty of reasons why Trump might vehemently object to Bair’s appointment — not least, her public support for his frequent target, Warren.

Bair has deep Republican roots: She was appointed chair of the Federal Deposit Insurance Corporation by former Republican President George W. Bush in 2006, and in the 1980s was a top aide to former Republican standard bearer, Sen. Bob Dole. But in January, she authored an OpEd “The Republican case for Elizabeth Warren,” arguing Warren has been unfairly mischaracterized by the press as a “left-wing radical.”

“She has independence and integrity and is no socialist,” Bair wrote. “She just wants the market to work for everyone.”

Bair took another swing at Trump in the Washington Post that same month, implying that she could vote for former Vice President Joe Biden and writing: “The country has seen a downward spiral in the qualifications of the individuals we have elected as president. We arguably hit a new low with Donald Trump, who had zero years experience in public service.”

That said, she knows the policy front to back, and hasn’t shied away from opining on the CARES Act. In an interview earlier this month with Yahoo Finance, she swatted away several recurring GOP stimulus ideas, like a payroll tax cut or a capital gains tax cut, and said private equity firms shouldn’t be prioritized for payments.

“We should be prioritizing small businesses that are more the owner-operator variety,” she said. “I would think that deep-pocketed private equity firms could be pretty low on the priority list of where this money goes.”