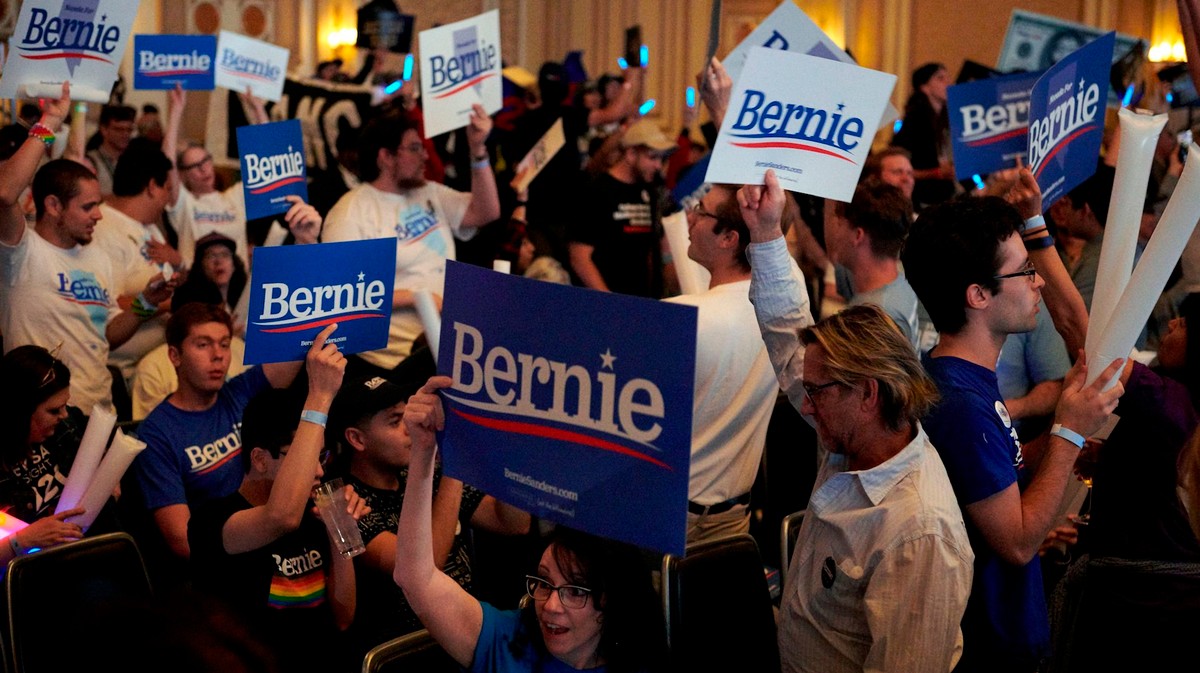 LAS VEGAS — Nevada’s Democratic caucuses begin Saturday, and no one seems quite certain how — or if — things are going to work.

As they watched Iowa’s caucuses melt down last week, Nevada Democrats made the quick decision to scrap an app designed by the now-notorious Shadow, Inc, whose technology failed on election night and left Iowa Democratic officials unable to provide vote and delegate counts for days.

That decision solved one problem — but it created a bigger one. Nevada spent the better part of a year planning out an even more complex process than Iowa around the app, including the release of multiple results (like Iowa) as well as a system to include four days of in-person early voting with those results then relayed back to voters’ original caucus sites to be included in same-day caucus vote totals.

With early voting starting Saturday and the official caucuses just over a week away on Feb. 22, the party is scrambling to design a functional caucus system in less than three weeks.

“We’ve been put in a difficult situation,” said a source with the Nevada Democratic Party. “What was once a backup plan is now our main plan and now we’re having to develop additional backup plans and test them. We’re working around the clock to make sure what happened in Iowa doesn’t happen in Nevada.”

It doesn’t help that Nevada is trying to pull off perhaps the most complicated statewide caucus ever attempted.

READ: Here’s Nevada’s plan to save its caucus from catastrophe

Like Iowa, Nevada Democrats will for the first time release not one but three sets of numbers: Who caucus goers backed in the first round of voting, who they supported in the second round after candidates who don’t reach 15% of the vote in the first round are eliminated from contention at each caucus site, and a third number which actually calculates how many delegates each candidate gets. That created major problems in Iowa when glaring math mistakes by precinct captains, once kept private, were exposed for all to see.

But that’s not even the hard part. The Nevada Democratic Party is allowing early voting for the first time.

That’s a good pro-democracy reform — it if works. But counting those early votes is harder than it sounds. Those votes have to be tabulated back to the caucus sites where they would have voted on caucus day, and early voters’ second, third, and even fourth or fifth choices will have to be taken into account in case their top candidate doesn’t reach the 15% threshold required to receive delegates at those sites.

The early voting part was enabled by the Shadow app, which Nevada scrapped last week and replaced with a Google form on party-issued iPads.

‘Time is running out’

After Iowa, Nevada Democrats know failure is not an option.

“It’s been complicated from the beginning — we’re trying to be more transparent, be more accessible, and bring in more people. This is the first time you’ve ever had early voting for a caucus, it’s this hybrid primary-caucus, which adds to the confusion,” said Rep. Dina Titus (D-Nev.), a top Joe Biden surrogate in the state. “Time is running out. They’re scrambling and trying to do it right.”

The main reason Democrats aren’t in full-out panic mode is the Nevada Democratic Party is widely considered by operatives in both parties to be the most capable Democratic state organization in the country. A number of alumni from former Senate Majority Leader Harry Reid’s network have stepped in to try to help. But even Reid admitted to VICE News earlier in the week he was “concerned” things would run smoothly.

The presidential campaigns are sympathetic to the state party’s plight — but are growing increasingly fed up with their lack of details on how things will work, and panicked that the party won’t be able to pull off a smooth election.

READ: Nevada is now do or die for Joe Biden

“They were handed a complete shit sandwich, they had a dumpster of crap dumped on them. We know them very well and I know they’re trustworthy, diligent, committed to a fair and smooth process,” said a Nevada-based source from one presidential campaign. “We still have a lot more information we want to see.”

The party sent a memo with new updates from the party on Thursday, including more information on how early voting is supposed to be counted on election day.

“We understand just how important it is that we get this right and protect the integrity of Nevadans’ votes. We are confident in our backup plans and redundancies,” Nevada Democratic Party Executive Director Alana Mounce said in the memo.

That update calmed some nerves. But multiple Democratic campaigns expressed frustration that the party hasn’t been more forthcoming with details — the Thursday memo and similar three-page bullet-point memo from Tuesday sum up most of the concrete information they’ve been provided. And they still have plenty of questions about how things are actually going to function.

One Nevada-based presidential campaign operative told VICE News that their team was “absolutely not” feeling any more confident about the process after the latest update from the state party, pointing out that there are still few details about how the early vote data will be tabulated.

“The main crux of the issue is still how early vote data is tabulated into precinct-day caucuses on the 22nd. There have been no details or info shared into that process still,” said the source.

A source with a different campaign was just as concerned.

”Early vote is starting really soon, and it’s a shame the campaigns haven’t been read into this yet.”

“There are all these processes that still need to be outlined. Early vote is starting really soon, and it’s a shame the campaigns haven’t been read into this yet,” one Democratic presidential campaign operative in Nevada told VICE News Thursday afternoon.

Campaign staff are are also still worried about a lack of detail in how the party plans to protect the physical ballots, how they will make sure the party protects the security Google form containing all the voting information secure (the party says it’s working with Google as well as the Department of Homeland Security), and whether the thousands of volunteers that are being used to run the actual caucuses will receive enough training to avoid making damaging mistakes on caucus day.

A staffer with a different campaign warned that “The potential for chaos increases exponentially” if the 1,700 individual precinct chairs don’t get clear, exacting guidance and plenty of training on how to reallocate the early votes on the second round of voting on caucus day. That information is still lacking as Nevada Democrats barrel towards election day.

The party will use a “caucus calculator” preloaded on iPads. Nevada Democrats held a training webinar to walk volunteers through the process Thursday evening. A source with the party said volunteers “will have the ability to practice using their iPads ahead of Caucus Day.” If those fail, the precinct captains also will have paper copies of every absentee voter’s preferences to tabulate in the second round. That could be a slow, painstaking process and risks human error with not-so-simple math.

Once precinct votes are finalized, the party says there will be a two-source verification process where data will first be reported through a secure hotline to a trained operator, which would be checked against a second source to catch errors — either the paper reporting sheet or the caucus calculator.

The stakes couldn’t be much higher. Iowa’s disaster gave the party a black eye and led to rampant speculation and, with Bernie Sanders supporters especially aggressive in pushing conspiracy theories that the caucus meltdown had been intentional to hurt their candidate. Sanders is currently the frontrunner in Nevada, and many Sanders supporters are still convinced the 2016 caucus in the state was stolen from them.

Those nerves — and uncertainty — were on full display Monday night in Northwest Las Vegas. Bernie Sanders and Pete Buttigieg happen to have field offices in the same strip mall, and held simultaneous trainings for dozens of volunteers to teach them tactics to woo undecided voters who might break their way in the caucuses and make sure they understood the basic caucus math so they could catch mistakes from the party volunteers.

As Sanders Nevada Caucus Director Derrick Radford led volunteers through a 108-slide training session, he repeatedly had to pause to deal with concerns from supporters worried the state party was out to get Bernie.

He effectively reassured one woman who claimed Nevada Democrats had rigged the election against Sanders at the convention last time as others murmured agreement, outlining the data teams the campaign have in place this time to catch any funny business.

But because of the state party’s scramble, Radford couldn’t answer another woman who asked “how can we trust them” to report the early vote total accurately to the caucus precincts.

“They’re still working out the process for early voting. I know it’s in five days but they had to switch their system after Shadow [the failed app],” he said with a hint of frustration.

“As you know, Iowa had an app mishap last Monday. The state party was going to use the same app. They are working on a contingency plan now,” he said in response to one question. “Our organizers will be feeding out more information to folks as we have more information about how the process is actually going to work.”

Nevada Democratic officials know how much scrutiny they’re under.

“Given what happened in Iowa we understand even more so how important Nevada is and that’s why we’re taking this process so seriously. We need to get it right,” Nevada Democratic Party Communications Director Molly Forgey told VICE News.

It’s very hard to predict exactly how things might go wrong in Nevada. One failure at any point in the complex system could cascade to the next, avalanching into a systemic failure like what happened in Iowa. And that’s a big reason so many Nevada Democrats are on edge.

Michael Avenatti Just Got Convicted in His Nike Extortion Case