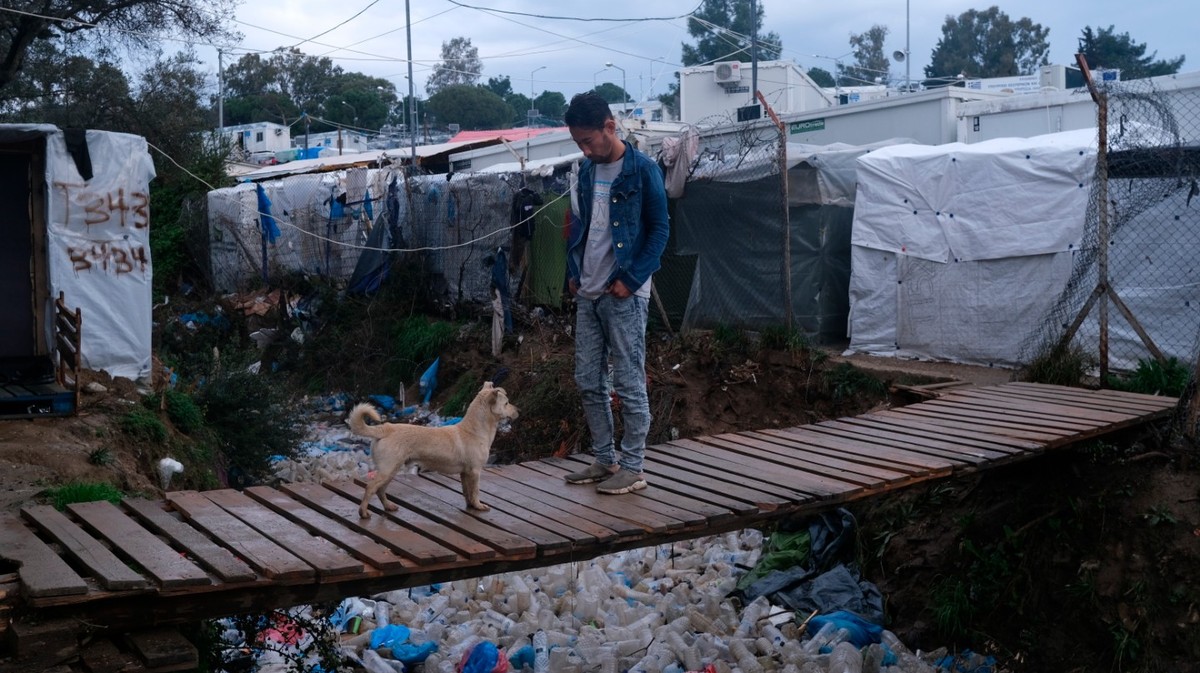 In the infamous Moria camp on the Greek island of Lesbos, 26,000 migrants eke out a desperate existence in a facility built for just 2,800. The paths are strewn with garbage and sewage pipes burst often. Residents line up for hours for a chance to shower, and even then, there’s no hot water.

Families sleep cheek by jowl in tents. Scabies, lice, and respiratory problems are commonplace. It’s far from the new life in Europe they hoped for — and it’s the perfect breeding ground for the coronavirus.

As COVID-19 threatens Moria, and other camps like it in Europe and the Middle East, aid agencies are scrambling to prepare for what they fear will be a devastating outbreak.

Concerns have grown so severe that Doctors Without Borders called Thursday for Moria and others on the Greek islands to be evacuated immediately. Fears about the situation have surged in recent days since the first case of the coronavirus was confirmed on Lesbos.

“In some parts of Moria camp there is just one water tap for every 1,300 people, and no soap available,” said Hilde Vochten, the organization’s medical coordinator in Greece.

“Families of five or six have to sleep in spaces of no more than three square meters [32 square feet]. This means that recommended measures such as frequent hand washing and social distancing to prevent the spread of the virus are just impossible.”

READ: Raw sewage, mountains of garbage, and the coronavirus: Inside Moria

Aid agencies are doing what they can to prepare for an outbreak among refugees, with the U.N. Refugee Agency appealing for an urgent $33 million needed for the response. Aid workers are training staff and issuing them with protective gear, equipping labs to carry out diagnostic tests, building new latrines and wash facilities, and spreading awareness on hygiene.

But reminders on handwashing are of little use in camps with little or no access to clean water. Aid workers know if an outbreak hits, the situation could swiftly become catastrophic.

“We need to be realistic: It would be impossible to contain an outbreak in such camp settings,” said Vochten. “To this day we have not seen a credible emergency plan to protect and treat people living there in case of an outbreak.”

In Syria, the outlook is equally grim. Erin Taylor, spokeswoman for Save the Children, told VICE News that her organization was working with partners prepare for an outbreak.

“However, the reality is that after nine years of conflict, the health system and infrastructure that would be vital in combating any public health emergency have been decimated.”

READ: How Assad is using hospital bombings to win the war in Syria

In places like Syria’s Idlib province, heavy fighting between Turkish-backed rebels and Russian-backed Syrian regime forces has devastated the region and sent a wave of about 1 million people towards the Turkish border in recent months.

The World Health Organization said in a statement to VICE News it’s working to build capacity there to respond to an outbreak, training staff and preparing labs for testing. But, said Taylor, “it would be incredibly difficult to control an outbreak among nearly a million newly displaced people in overcrowded conditions hemmed in by vicious fighting.”

The scale of the challenge is huge. The Syrian crisis alone has created about 5.5 million refugees living in nearby countries, and displaced another 6 million inside Syria, according to U.N. estimates. Of the refugees, about 290,000 live in camps, with the rest living in other settings, often in desperate circumstances.

So far, no cases of COVID-19 have been reported among refugees or asylum seekers anywhere in the world, according to Filippo Grandi, the U.N. High Commissioner for Refugees. But as the number of confirmed cases continues to rocket, reaching more than 127,000, aid workers view it’s arrival in the camps as just a matter of time.

“Inevitably, my projection is that the virus will get everywhere,” Aitor Sanchez Lacomba, coronavirus lead for the International Rescue Committee’s resettlement, integration and asylum department told VICE News. “At a minimum we need to be as prepared as possible.”

Cases of COVID-19 are being reported closer and closer to the camps. While Syria’s government says there’s no coronavirus in the country — a claim that even pro-regime commentators view as dubious — the World Health Organization said it considers the risk of a coronavirus outbreak to be “very high, particularly in densely populated areas and areas of active hostilities such as in northwest Syria.” Cases have been confirmed in all five countries neighboring Syria, including Turkey, home to some 3.7 million Syrian refugees, and Lebanon, where there are 1.5 million.

In Greece, the frontline of refugee flows from the Middle East into Europe, doctors have feared a serious outbreak of disease in Moria even before the COVID-19 pandemic.

Greece has been heavily impacted by a fresh wave of migrants since Turkey opened its borders last month, but it’s not the only European country where there are concerns about the impact of COVID-19 on refugees. Sanchez Lacomba said that for refugees living in squats and shelters in Italy, or in camps in Serbia, where about 6,000 people live in desperate conditions, the same concerns about access to sanitation applied.

READ: Turkey is threatening to flood Europe with refugees after losing dozens of soldiers in Syria

He said it was important not to stigmatize refugees as being more likely than any other group to carry the virus — as a number of European governments have done as a justification to close their doors to migrants.

“COVID-19 is not more likely to be among refugees than any other group,” he said. “But where refugees tend to be living, whether in camps or in cities, these tend to have worse sanitation conditions than elsewhere. We are worried about these places, of course.”

Cover: A migrant walks over discarded garbage outside the perimeter of the overcrowded Moria refugee camp on the northeastern Aegean island of Lesbos, Greece, Wednesday, March 11, 2020. Camps on Lesbos and other islands of the eastern Aegean are already overcrowded and operating above their capacity. (AP Photo/Aggelos Barai)

Chelsea Manning Will Be Released From Prison