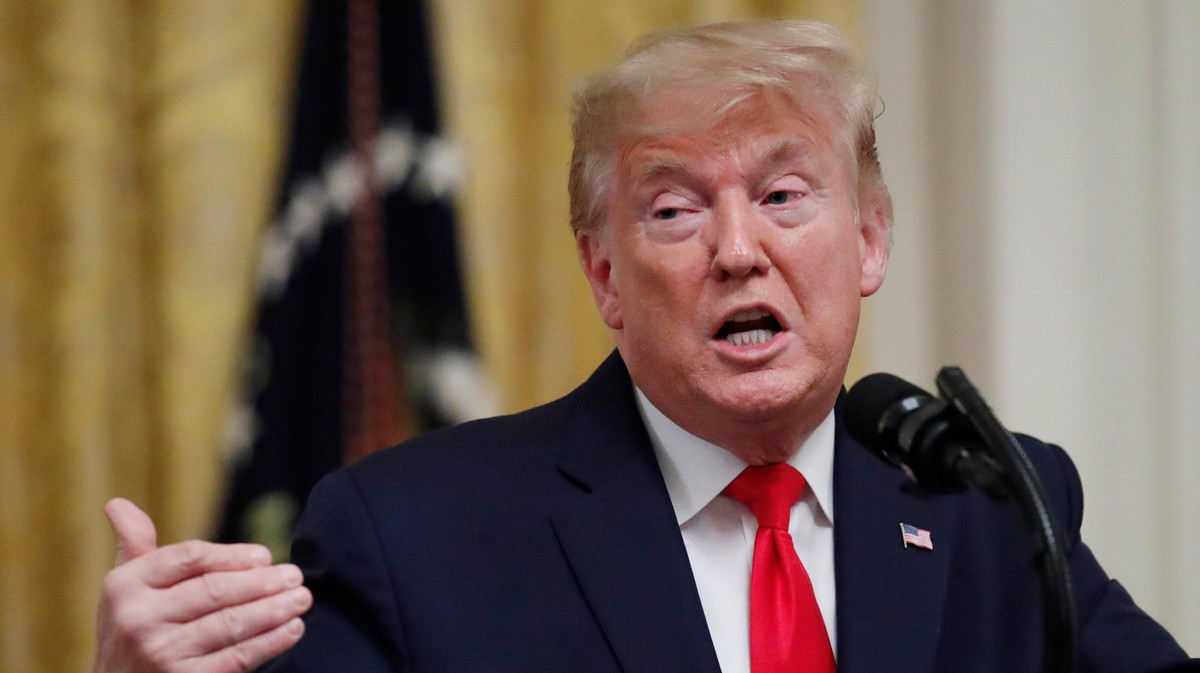 Following an extremely public spat between Secretary of State Mike Pompeo and NPR after one of its reporters asked him about Ukraine, President Donald Trump weighed in with a tweet questioning why the nearly-50 year old public radio outlet exists at all.

On Friday, Pompeo was interviewed by All Things Considered co-host Mary Louise Kelly, and was pressed on the subject of Ukraine. After the interview ended, Kelly told co-host Ari Shapiro, she was led into a room where Pompeo proceeded to berate her for nearly ten minutes and demanded that she pick out Ukraine on an unlabeled map of the world.

Pompeo released a wild statement on Saturday accusing Kelly of lying. On Sunday, Trump quote-tweeted a post from right-wing media figure Mark Levin asking, “Why are we paying for this big-government, Democrat[ic] Party propaganda operation.”

“A very good question!” Trump added in his own tweet.

Attacks on the Corporation for Public Broadcasting, which distributes funding for NPR and PBS, are nothing new for Trump or even the rest of the Republican Party. All three of the Trump administration’s proposed budgets have attempted to kill funding for the CPB (and thus NPR and PBS), and all have failed miserably. In 2012, Republican presidential candidate (and current U.S. Senator) Mitt Romney was roundly criticized for saying in a presidential debate that he’d cut PBS.

About 8 percent of NPR’s annual funding comes from CPB, while 4 percent comes directly from federal, state, and local governments, according to NPR.

The dispute between Pompeo and Kelly stems from a disagreement about the terms of the interview. “You know, I agreed to come on your show today to talk about Iran,” Pompeo said in response to her Ukraine question. Later, after Kelly repeatedly pressed him on the subject, he said, “I appreciate that you want to continue to talk about this.”

But things turned nastier once the interview was over, Kelly said, recounting Pompeo’s post-interview fury.

“He was not happy to have been questioned about Ukraine,” Louise Kelly later told co-host Ari Shapiro. He asked, ‘Do you think Americans care about Ukraine?’ He used the F-word in that sentence and many others.” He then reportedly asked Kelly to find Ukraine on a map.

Following Kelly’s report and disclosure of the post-interview conversation, which she maintained was off-the-record, Pompeo accused the veteran NPR reporter of lying about her intention to ask him about the Ukraine, and claimed that she had agreed to keep the second conversation off the record.

“This is another example of how unhinged the media has become in its quest to hurt President Trump and this Administration. It is no wonder that the American people distrust many in the media when they so consistently demonstrate their agenda and their absence of integrity,” Pompeo said in the aforementioned statement.

He also implied that Kelly flunked his geography quiz. “It is worth noting that Bangladesh is NOT Ukraine,” Pompeo said. (Kelly, who has a masters degree in European Studies from Cambridge, told Shapiro she had correctly identified Ukraine.)

But Pompeo was either severely misinformed by his staff about the interview terms or flat out lying, according to emails obtained by the Washington Post. Responding to Pompeo press aide Katie Martin’s request to stick to Iran, Kelly said in one email: “I am indeed just back from Tehran and plan to start there. Also Ukraine. And who knows what the news gods will serve up overnight. I never agree to take anything off the table.”

AOC vs. Jonathan Van Ness: Welcome to the Influencer War in Iowa