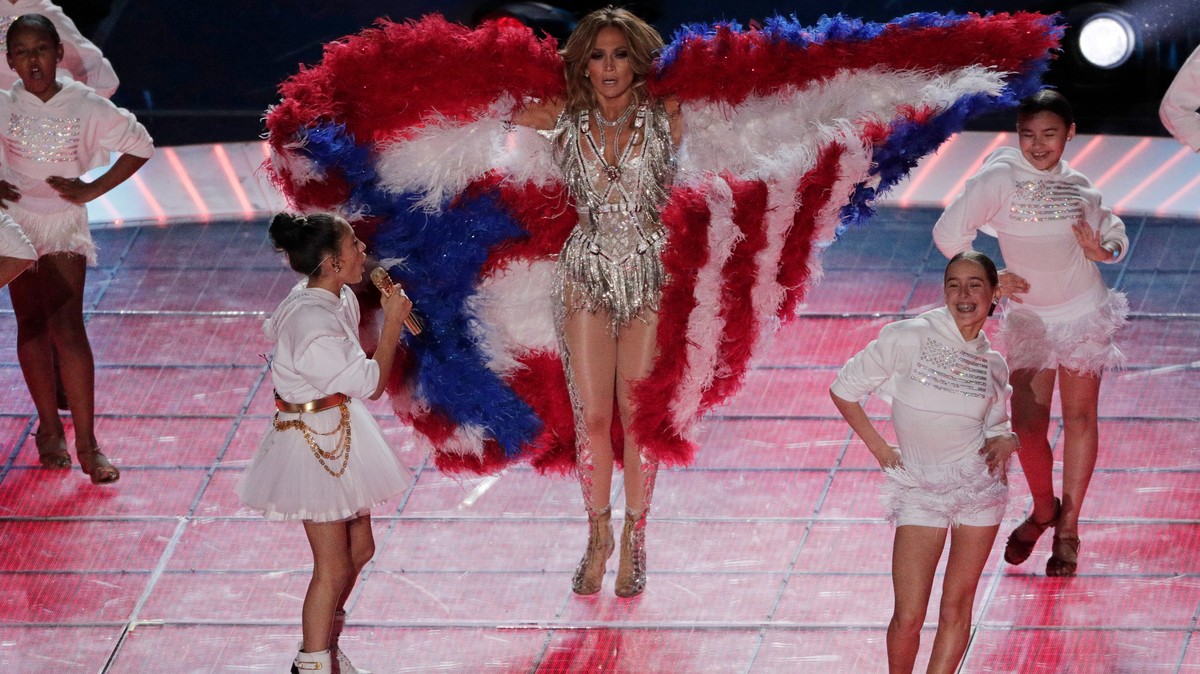 Besides giving fans a dazzling display of Latina starpower at the Super Bowl halftime show, Jennifer Lopez and Shakira also had a lot to say about hot-button political topics — and they didn’t have to buy a multimillion-dollar ad to get the message out.

The pop stars peppered some pointed political statements throughout their nearly 15-minute performance, hinting at what was to come in a pre-game interview.

“I think Latinos are going through a difficult time in the U.S. right now, and I think it’s very important for us to convey a message of unity and also to show what a relevant force the Latino community is in this country, how much we have to offer, our idiosyncrasies, our culture that is so diverse,” Shakira said in a pre-Super Bowl press conference.

“I want this to be a big celebration and a big party. An inclusive party. I want to inspire many men and women and Latinos and people around the world to dream as big as they can,” Lopez said in an Instagram story before the game.

As for the actual politicians getting their message out to the huge Bowl -viewing audience, the Trump campaign and Michael Bloomberg each paid $11 million for their ad spots. But don’t cry for Bloomberg: For the multi-billionaire, that’s roughly equivalent to the hit someone worth $50,000 takes when they get lunch from Burger King, according to the Washington Post.

About three-quarters of the way through the show, a group of kids in singular “cages” appeared including Lopez’s daughter, who led a chorus of children—all donning sweatshirts with the American flag on them—singing Lopez’s 1999 song “Let’s Get Loud.”

The cages seemed to be a not-so-subtle dig at the Trump administration’s immigration policy and a reminder of the struggles faced by children in migrant detention centers. Needless to say, not everyone loved it.

“They have kids that look like they’re in cages, and a lot of people thought, ‘Is this something going after the administration?'” Fox and Friends host Brian Kilmeade said Monday. “That’s what Democrats say about Republicans.” (“I liked how all of the dancers around her were wearing shirts with American flags,” added co-host Ainsley Earhardt.)

Quickly following that short performance, Lopez came back out on stage donning a Puerto Rican flag as Maribel began singing the chorus of the Bruce Springsteen song “Born in the U.S.A.”

Amid the uproar over the government’s response to catastrophes in Puerto Rico over the last several years—its finances and the lack of control Puerto Ricans have over them, corruption, Hurricane Maria, and the recent earthquakes—the moment served as a reminder to the general public of the struggles the territory is going through, and the fact that it’s still very much a part of the United States.

Nods to the Arab world

During Shakira’s portion of the performance, the singer — whose paternal grandparents are from Lebanon — launched into a zaghrouta, an expression of joy in the Arab world that involves moving your tongue really, really fast. It also spawned a slew of memes:

She also performed her song “Ojos Así,” which is partly sung in Arabic, and her performance featured belly-dancing and the doumbek and mijwiz instruments, which are commonly used in Middle Eastern music.

Shakira’s nod to the Arab world came just days after the Trump administration expanded its travel ban to include more countries with significant Muslim populations, such as Nigeria and Myanmar, where Rohingya Muslims are fleeing genocide. The initial travel ban—which included Iran, Syria, Yemen, Sudan, Chad, Venezuela, and North Korea—was upheld by the Supreme Court in 2018.

Trump’s Wild Week: Impeachment Collides With the State of the Union. Oh and Iowa Is Happening.