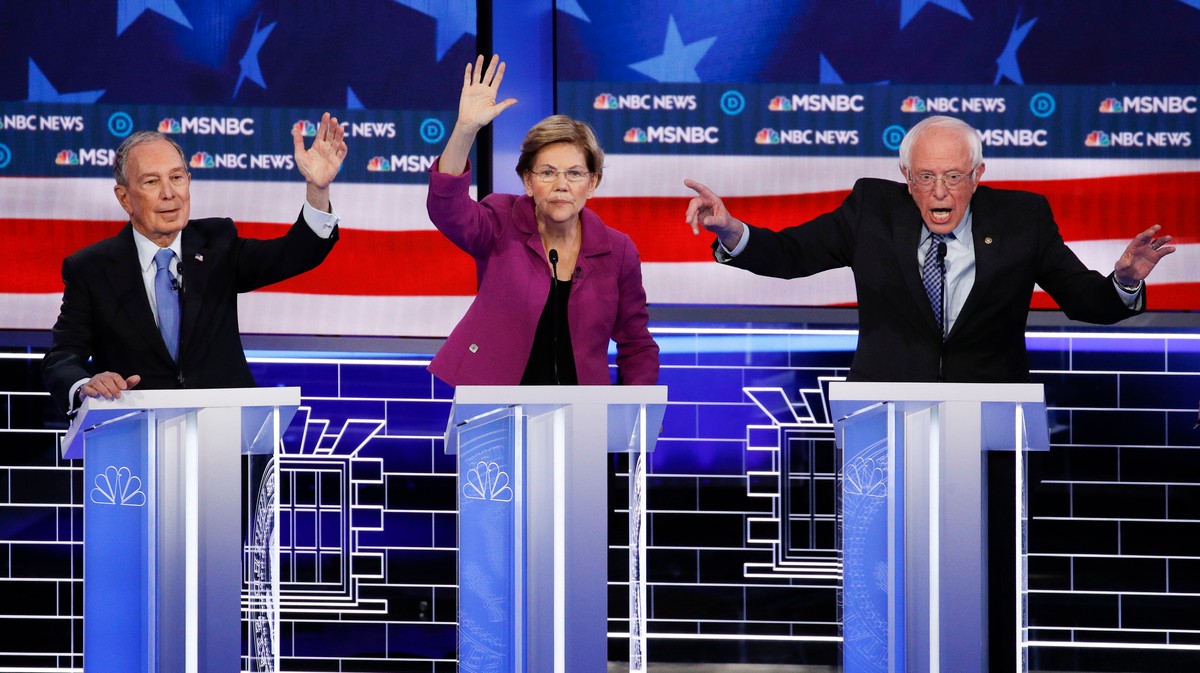 By the relatively tame standards of the other Democratic debates, last night was all-out war.

From the opening question, the crowded cluster of candidates running behind Sen. Bernie Sanders and neck-and-neck with billionaire newcomer Michael Bloomberg trained their fire on both. The first few minutes, in particular, were open season on Bloomberg, who was slammed on his history of sexist comments, his former support of stop and frisk, and not releasing his tax returns.

It didn’t take long for the candidates to turn their fire on each other, however, and repeated attempts to one-up each other were a consistent theme throughout the night in what was hands-down the spiciest debate so far.

Before Sanders was even done answering the opening question, Warren’s hand shot up. After Bloomberg said that Sanders couldn’t beat President Donald Trump in a general election, Warren tore into him.

“I’d like to talk about who we’re running against: a billionaire who calls women ‘fat broads’ and ‘horse-faced lesbians’,” she said. “And, no, I’m not talking about Donald Trump. I’m talking about Mayor Bloomberg.”

“Democrats are not going to win if we have a nominee who has a history of hiding his tax returns, of harassing women, and of supporting racist polls like red-lining and stop and frisk,” she continued. “Look, I’ll support whoever the Democratic nominee is. But understand this: Democrats take a huge risk if we just substitute one arrogant billionaire for another.”

READ: Michael Bloomberg got destroyed in the first 3 minutes of the debate

Throughout the debate, former South Bend mayor Pete Buttigieg hit on a theme that both Sanders and Bloomberg were too “polarizing” to be the nominee. “Most Americans don’t see where they fit if they’ve got to choose between a socialist who thinks that capitalism is the root of all evil and a billionaire who thinks that money ought to be the root of all power,” Buttigieg said early on.

“We are giving a voice to people who are saying we are sick and tired of billionaires like Mr. Bloomberg seeing huge expansions of their wealth while a half-a-million people sleep out on the street tonight,” Sanders countered. “And that’s what we are saying, Pete, is maybe it’s time for the working class of this country to have a little bit of power in Washington, rather than your billionaire campaign contributors.”

“My campaign is fueled by hundreds of thousands of contributors,” a flustered Buttigieg started, before Sanders shot back: “Including 46 billionaires.”

Warren sticks a fork in everyone else’s healthcare plan

When Warren was a front-runner throughout the summer and fall, her plan to pass Medicare for All by the end of her first term came under intense scrutiny from opponents, who claimed it would cost too much and kick too many people off health insurance plans that they like.

After Sanders was asked about a recent spat with the powerful Culinary Union over Medicare for All, Warren jumped in to turn the tables on her opponents. Buttigieg “has a slogan that was thought up by his consultants to paper over a thin version of a plan that would leave millions of people unable to afford their health care,” she said. “It’s not a plan. It’s a PowerPoint.”

Turning to Amy Klobuchar, she said of the Minnesota senator’s plan: “It’s like a Post-It note, ‘Insert Plan Here.’” (Later, she would say that Klobuchar’s plan takes up just two paragraphs on her website, but it’s much longer than that.)

And finally, looking to distinguish herself from Sanders on the issue, she remarked that “his campaign relentlessly attacks everyone who asks a question or tries to fill in details about how to actually make this work.”

Bloomberg gets busted on NDAs

When Bloomberg was asked by moderator Hallie Jackson about his history of sexist remarks, he responded by pointing out that his company, charitable foundation, and mayoral administration had women in them. Warren wasn’t having it.