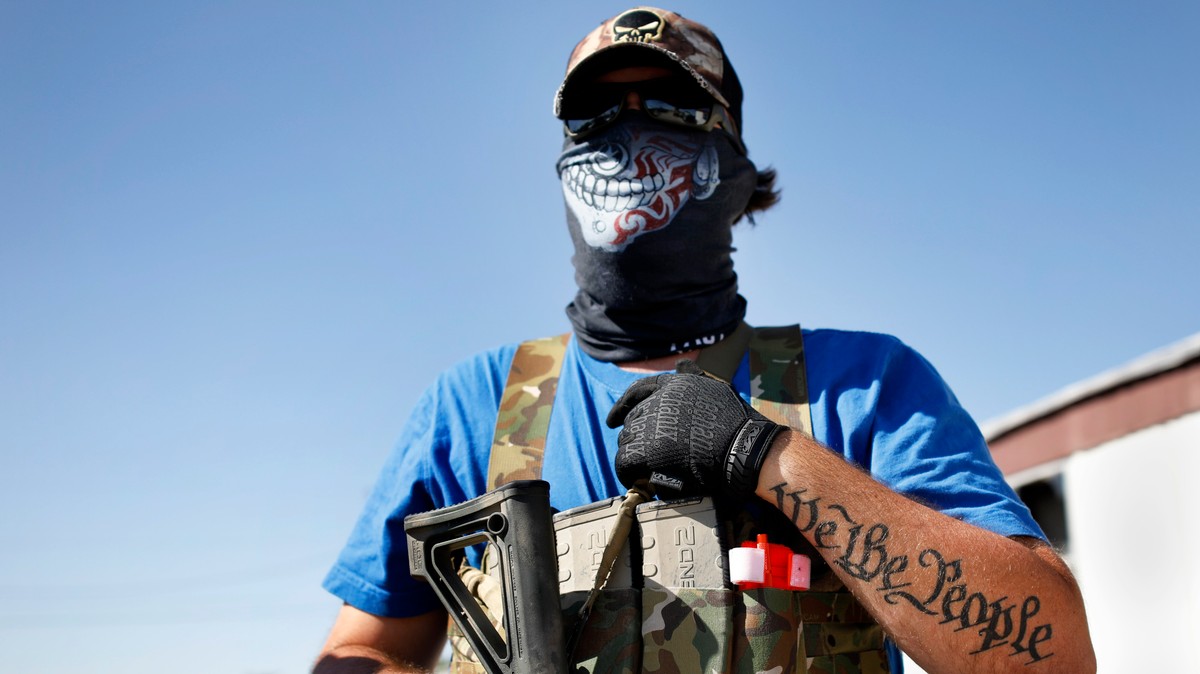 The younger, shitposting face of the armed far-right — often called “boogaloo bois” — have been showing up at anti-lockdown protests across the U.S., toting their AR-style rifles and wearing their trademark Hawaiian shirts and leis.

It’s a troubling sign that the far-right “boogaloo” meme, used to refer to or even incite an impending civil war or violent anti-government rebellion, is now spilling out into the real world.

On Monday, a group of heavily armed men — including at least one with links to the boogaloo movement — were arrested following a tense standoff with SWAT outside Big Daddy Zane’s Bar in West Odessa, Texas. The men claimed they were protecting the bar, whose owner was defying Texas’ lockdown orders by remaining open. Texas Gov. Greg Abbott loosened some restrictions on businesses in recent weeks, but bars remain shuttered.

A total of eight people were arrested: seven armed vigilantes and the bar owner. A Facebook page for Wyatt Winn, one of the arrestees, shows that he follows about two-dozen pages dedicated to boogaloo. Recently uploaded photos show Winn posing with a group of armed men in Hawaiian shirts. Other memes he shared reference Duncan Lemp, a 21-year-old student with anti-government views who has been martyrized by the armed far-right after he was killed by cops in Maryland during a nighttime no-knock raid in March. Police said they were executing a high-risk search warrant following a tip that Lemp was in illegal possession of firearms.

Screenshot from Wyatt Winn’s Facebook page, referencing Duncan Lemp, a 21-year-old student who was killed by police while they were executing a gun-related search warrant in Maryland.

Lemp’s death, and the political tension surrounding coronavirus-related lockdown orders, have galvanized the boogaloo movement, whose adherents have used the two events to drum up anti-government sentiment among conservatives.

A report by the Tech Transparency Project last month identified 125 Facebook groups that were dedicated to “boogaloo,” and more than 60% of those had been created between February and April. On those pages, shitposting, racism and anti-government memes intermingle. That’s typical for boogaloo pages, according to a February report by the Network Contagion Research Institute (NCRI), which tracks how hate moves from the internet into the real world.

“While many still use the boogaloo meme jokingly, an increasing number of people employ the phrase to incite an apocalyptic confrontation with law enforcement and government officials or to provoke ethnic warfare,” NCRI wrote.

The incident in West Odessa, Texas, was just the latest example of extremists, including boogaloo bois, taking up arms in response to lockdown orders.

On Thursday, Colorado police said they were investigating threats of civil war made against health centers. “We the people’ are DONE with this f***ing bulls**,” one person wrote in an email, according to local news outlets, “and you’re about to start a hot-shooting no bulls*** civil war.”

And last Friday, federal agents arrested Bradley Bunn, a 53-year-old man in Loveland, Colorado, for possession of pipe bombs, which he said he’d planned to use against law enforcement if they raided his property in the middle of the night (a possible reference to Lemp). Local news outlets identified him as a member of a militia, and reported that he’d planned to attend an armed lockdown protest.

Following Bunn’s arrest, according to the Site Intelligence Group, which tracks extremist activity, misinformation about an impending FBI raid on armed protesters began circulating on 4chan and far-right Telegram channels — with some users encouraging armed resistance.

Also last week, heavily armed men with long guns stormed Michigan’s capitol, joining hundreds of conservative protesters who were demanding an end to stay-at-home orders. Some state lawmakers had shown up to work that day with bulletproof vests on in anticipation of violence.

On May 1, armed militia men also showed up to protest lockdown orders in Richmond, Virginia. The same day, armed men promoting boogaloo protested in Raleigh, North Carolina. They had responded to a “call to arms” issued by a Facebook group called “Blue Igloo” (a homophone for boogaloo). “They’re called guns,” one person wrote in response to the event page, the Triad-City-Beat reported. “Show up ready to use them. I’m tired of this shit. I’m not going to any more protests unless serious men come and are ready to defend our lives and liberties.”

And earlier in April, police in Texas arrested Aaron Swenson, a self-proclaimed “boogaloo boi” who was Facebook live-streaming his search for a police officer to “ambush and execute.” He, too, was upset about Duncan Lemp’s death.

The day after Lemp was killed, Swenson changed his Facebook profile picture to a photo of himself in a Hawaiian shirt, and an armored vest, and the hashtag #HisNameWasDuncan, according to a Buzzfeed report.

Cover: Armed protester Wyatt Winn waits for Ector County Sheriff’s officers and Texas State Troopers, who were monitoring a protest, shortly before his arrest Monday, May 4, 2020, at Big Daddy Zane’s bar near Odessa, Texas. Winn and others were supporting the the bar’s owner, who decided to open despite orders from the Texas governor during the coronavirus pandemic that prohibit the opening until later in May. (Eli Hartman/Odessa American via AP)