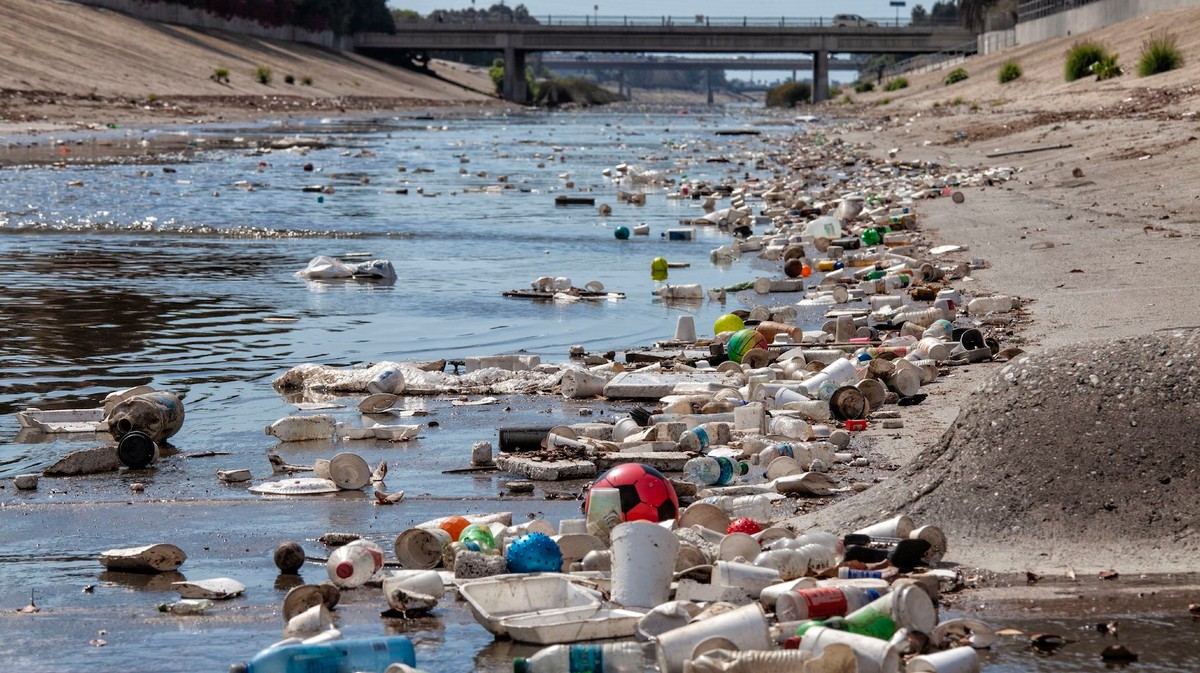 One winner in the coronavirus pandemic: single-use plastic.

Just a few weeks ago, states were implementing sweeping plastic bag bans and limiting the availability of plastic straws. But as the virus has spread through the U.S., states are rolling back their plastic bag bans, stores are banning the use of reusable shopping bags, and restaurants are turning to single-use utensils to reopen in the face of the coronavirus pandemic.

Behind that is an industry push to roll bag regulations that limit the use of consumer plastics, relying on studies funded by the plastics industry, that are painting the bans on plastics products as a public health risk.

Reusable bags, according to one industry group, “act as Petri dishes for bacteria and carriers of harmful pathogens.”

The industry-funded research that the plastics industry is citing acknowledges that reusable bags are totally safe, as long as they’re washed every once in a while. And the current research suggests that the virus can live on plastic surfaces for several days, albeit in laboratory settings. The virus isn’t believed to survive for as long on softer materials, like the fabrics that most reusable shopping bags are made from.

“If concerns around reusable bags are coming directly from cashiers and baggers, I want to be sensitive to that,” said Jennie Romer, who leads the Surfrider Foundation’s policy efforts to reduce plastic pollution. “But I also know that the plastics industry has been sending letters and is behind a lot of it.”

States are suspending their bag bans

San Francisco, the very first city to introduce a bag ban way back in 2007, told its residents not to bring reusable bags to grocery stores. The entire state of California, one of the first to implement a statewide plastic bag ban, is allowing grocery stores to use them for a period of 60 days. Oregon has also placed its plastic bag ban on pause during the pandemic. And in New York, where a plastic bag ban just went into effect in March, enforcement of it won’t start until at least June.

California Gov. Gavin Newsom says it’s about protecting essential workers: “It is critical to protect the public health and safety and minimize the risk of Covid-19 exposure for workers engaged in essential activities, such as those handling reusable grocery bags.”

Single-use utensils are back

A draft of CDC guidelines for reopening, obtained by the Associated Press advised restaurants to use disposable menus, disposable forks and knives, and single-use condiments. Once restaurants start to reopen, people might be eating off paper plates and drinking out of Dixie cups, even at Michelin-starred restaurants (if any survive this). Before the pandemic, straw bans were proliferating across the country; now, governments could require their use.

Plastics lobbying is shifting into overdrive

Industry groups are lobbying hard, at both the state and federal level, to get bans on plastic overturned. “We ask that the department speak out against bans on these products as a public safety risk and help stop the rush to ban these products by environmentalists and elected officials that puts consumers and workers at risk,” reads a letter from the Plastics Industry Association to the Department of Health and Human services, obtained by Politico last month.

And while they do that, they’re asking for a bailout: The industry thinks it could use $1 billion from the feds to stay afloat during the pandemic.

Demand for plastics on the whole is likely rising

People are using way more disposable stuff now. Whether it’s bags or masks and gloves or single-use utensils, people are relying on plastics more than they did before the pandemic. Before the pandemic, only 9% of plastics produced since 1950 were recycled into other products.

Before the pandemic, all signs pointed to a boom of plastics production: 343 new plastics plants were set to be built or expanded, according to the plastics industry trade group, the American Chemistry Council. They were going to be fueled by a glut of cheap natural gas in the U.S., which provides the key chemicals needed to produce plastics, plastics production was set to triple by 2050.

But now, construction on many of those facilities is on hold due to the pandemic. The future for the industry is far less certain.

The most obvious way for the industry to lift itself up by its bootstraps is to stoke demand for plastic, particularly in developing countries, and roll back bans on single-use plastics. And that’s what plastics industry groups are pushing for.

Plastic pollution, even during a pandemic, is still a huge problem

We’re still dumping plastics into the oceans, or sending it overseas to places that don’t have the ability to adequately deal with it. “In Indonesia, the plastic is being burned in places like tofu factories for fuel,” Claire Arkin of GAIA, an advocacy group that opposes incineration, previously told VICE News.

“The world is flooded with plastic already, and it seems that supply is going to continue to grow,” Fredric Bauer, a postdoctoral fellow at Lund University in Sweden who studies the plastic industry, told TIME. “I’m afraid we’re going to drown in it.”