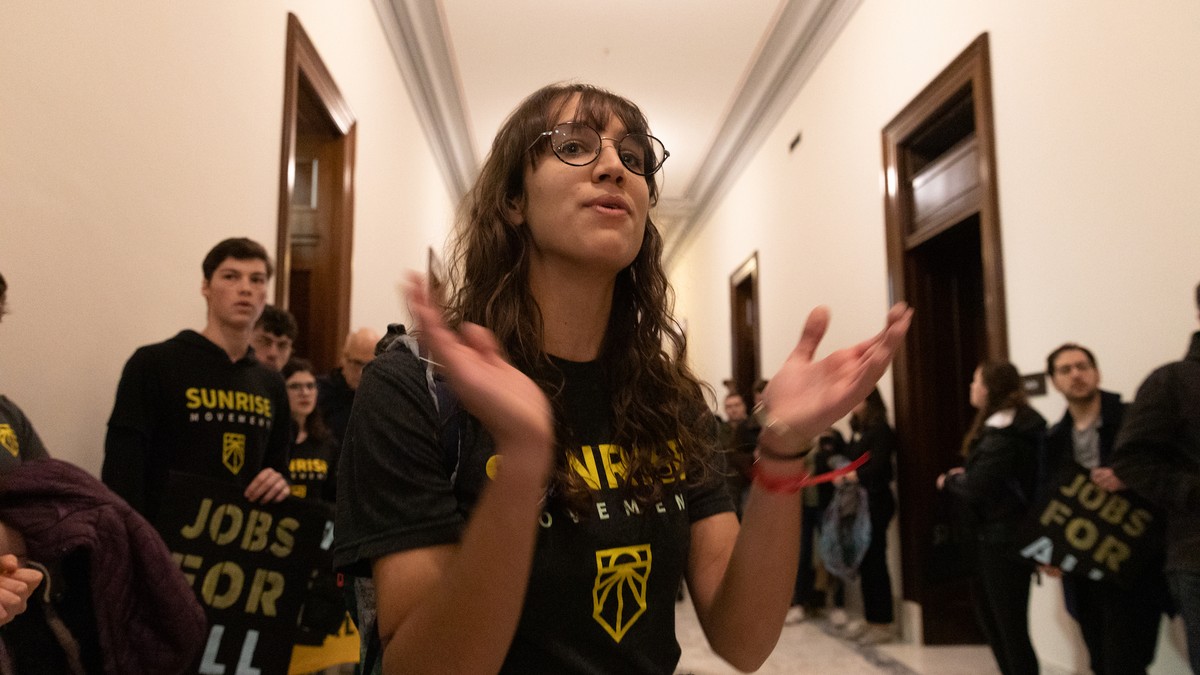 That’s how the nation’s preeminent youth climate group is handling the Super Tuesday losses of Sanders, who now looks dangerously close to flopping in his second attempt at the Democratic nomination.

The Sunrise Movement rose to prominence after a Green New Deal protest in front of Speaker Nancy Pelosi’s office and other hardball tactics earned them props from the progressive left. Earlier this year, they endorsed Sanders on the strength of his embrace of the Green New Deal, and have since been fully absorbed into his campaign, knocking doors, making phone calls and appearing on stage alongside the candidate.

Varshini Prakash, the group’s executive director, led a conference call with group members across the country Sunday night just days before what could be a disappointing blow to Sanders’ campaign in Tuesday’s Michigan primary. She tried to rouse her troops into action after what she called a “rude and clear reminder” of the power of the Democratic establishment and media to sway the electorate.

“We have had some tremendous wins, we have had some close and heart wrenching losses,” she said. “I feel like I cheered, I cried, I raged, I felt confused, I felt defeated, I felt hope, I felt so much love for this movement, and above it all I felt proud.”

READ: The Sunrise Movement bet big on Bernie in 2020. Here’s why.

Super Tuesday was a heartbreaker for Sunrise members, who see climate change as the existential issue of their time and, until last week, were watching their candidate leading the race for the Democratic nod against all odds. Even as she said she doesn’t buy the narrative that Sanders’ Super Tuesday loss was that bad, Prakash said it’s a super close primary that could go either way.

So what now? Well, they’re open to ideas — and they’re asking their members to go rogue.

Whether it’s hosting a teach-in at school, a get-out-the-vote party, a social media campaign, or canvassing on the dating app, Tinder, Prakash said she doesn’t want her members to wait for instructions from group leaders about where to show up and how to protest.

“We need to embody what Martin Luther King described as a fierce urgency of now and we don’t totally know how exactly we’re going to do this,” Prakash said. “We also need to start thinking more creatively and outside the box about what we can do that goes beyond convincing one voter at a time. We need to think about how we can make 2020 a generational uprising for a Green New Deal.”

That could lead to some bold and unpredictable protests over the next few months. Prakash called for a return to the “moral protests,” “strikes,” and “strategic disruption,” that catapulted the group from unknown advocates to a regular fixture in progressive politics, like the Pelosi protest or a days-long sleep-in on the outdoor steps of the Democratic National Committee office calling for a climate debate.

READ: Sanders vs. Biden is about to get really, really ugly

One group member chimed in on the chat section of the Zoom app Sunrise used to hold the conference call that they’re planning a banner drop at former Vice President Joe Biden’s Philadelphia campaign office. Another suggested Bernie-related graffiti on the sidewalks and walls around schools. Yet another is self-publishing a Green New Deal for Christians book.

And of course someone else suggested making Bernie and Green New Deal Tik Toks.

The conference call reflected a desperation from a young group that threw their lot in with Sanders only to watch him get sidelined by the Democratic establishment and voters in key states. They believe Sanders would better tackle the defining issue of their lives, but now might be stuck with a candidate they have advocated hard against.

Prakash said voters who consider climate change to be their top issue preferred Biden to Sanders, so the Sunrise Movement plans to bird-dog Biden over the next few weeks to try to bring attention to his record.

READ: This YouTuber is filming himself calling Biden supporters to day Joe has dementia

“If climate voters shift to Bernie, it could literally sway the election,” she said. “So over the next few weeks, we need to be everywhere that Biden is. We need to be asking him hard questions to push him on this record. We need to put those interactions online to highlight for voters why Bernie is the best candidate to energize our generation and defeat Trump.”

And while that part of the plan is designed to shift the election in Sanders’ favor, it also serves to push Biden to come up with a climate plan more acceptable to the young activists, or risk them not showing up on Election Day.

“We need to push Biden to be a stronger candidate more capable of mobilizing young and climate voters should he be the Democratic nominee against Trump.”

“We need to push Biden to be a stronger candidate more capable of mobilizing young and climate voters should he be the Democratic nominee against Trump,” she said.

The work will climax at an April 22 Earth Day strike and rally, said Evan Weber, the group’s political director. He said he wants the youth strikes at high school, colleges, churches and other institutions to amount to the largest sustained youth climate strike yet.

“This year, we’re going to take Earth Day back and take it over, because it’s unfortunately become an opportunity for greenwashing and photo ops for politicians,” he told listeners on the call.

Finally, although Jessica Cisneros, the candidate for the House who they endorsed in a heated Texas primary, lost, they want to rededicate themselves to helping boost the other candidates they’ve endorsed: Morgan Harper in Ohio, and Marie Newman and Robert Emmons in Illinois.

Cover: Members of The Sunrise Movement stands outside the Senator Mitch McConnell’s office on Monday morning during a rally in favor of the Green New Deal in Washington, D.C. On 25 February 2019 in Washington, DC, United States. (Photo by Aurora Samperio/NurPhoto via Getty Images)

Why the U.S. Could Be Worse Off Than Italy With the Coronavirus