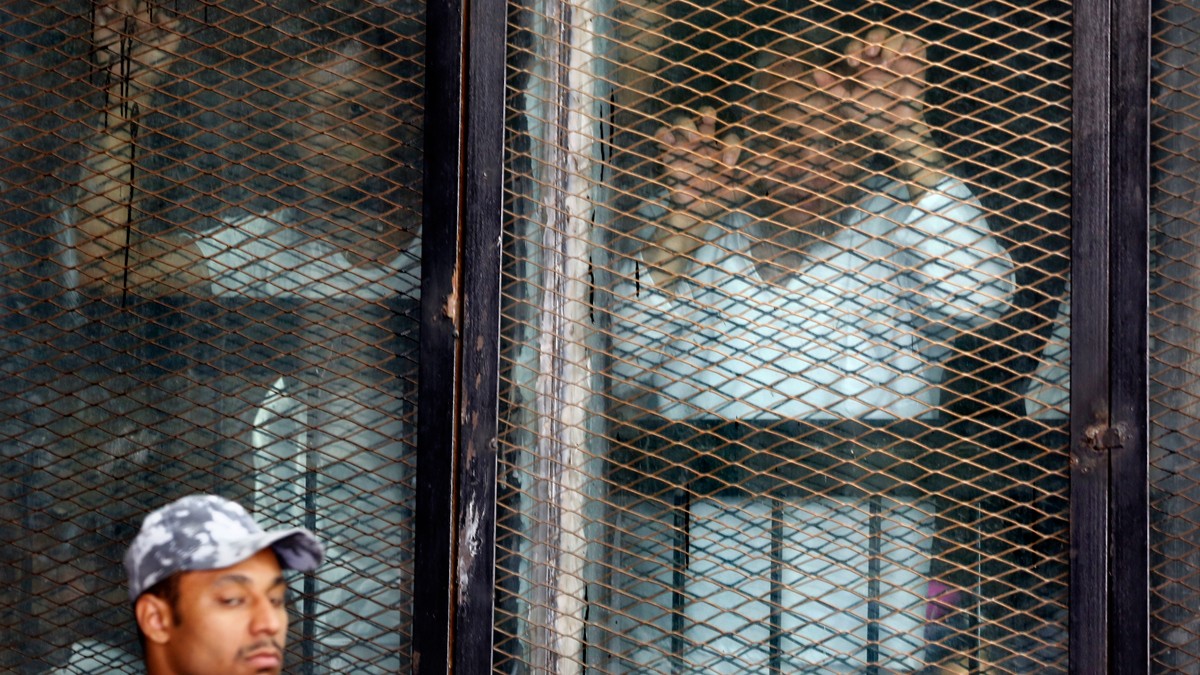 Ahmed has been in prison in Egypt for five years. He has another 20 years to go after he was sentenced in military court — even though he’s a civilian — for protesting against the military coup in 2013 that brought President Abdel Fattah el-Sisi to power.

But as fears of a coronavirus outbreak in Egypt’s prisons grow, Ahmed’s wife is now terrified that he won’t survive much longer.

“There is not any kind of medical care, and officers keep telling political prisoners that they are all here just to die,” Mariam told VICE News. “There are at least 20 prisoners to each room, which has no beds, no windows, nothing for air to get in and out. There is no door for the bathroom which is in this room for all of them. The water always cuts off.”

Mariam, whose name has been changed along with her husband’s over fears of retribution, has not had any contact with her husband since 10 days ago. That’s when the repressive Sisi government implemented a blanket ban on access to prisoners, who have no access to telephone calls or any other method of communication with the outside world.

“The authorities want them all to get coronavirus. They just don’t care if these prisoners are sick or well, dead or alive,” Mariam said.

“The authorities want them all to get coronavirus. They just don’t care if these prisoners are sick or well, dead or alive.”

The conditions Mariam describes match up with recent warnings from the international community about the threat to tens of thousands of political prisoners in Egypt’s squalid, overcrowded and unhygienic prison system. A coalition of rights groups, activists, politicians and members of civil society have written a letter to the U.N. urging them to pressure the government in Cairo to temporarily release prisoners to save thousands of lives. But there has been no response from a regime that’s operating in extreme secrecy, even during a global pandemic that is threatening the lives of millions.

“The prisons and detention centers are a fertile environment for any infectious diseases, especially such a highly infectious virus,” Amr Magdi, a researcher for Human Rights Watch, told VICE News. “The nightmare scenario is that an outbreak inside the prisons will never be known or heard of until it’s too late.”

Cairo has so far confirmed 196 cases and six deaths from the disease, but as in many repressive regimes, experts believe the government may not be disclosing the real figures.

The government is even cracking down on the sharing of negative news, revoking the credentials of two journalists for reporting on Canadian epidemiologists who estimated Egypt’s coronavirus infections had surpassed 19,000.

There are no official figures for the prison population in Egypt, but estimates from human rights watchers put the total at around 150,000. Of that, at least tens of thousands are so-called political prisoners, rounded up following the 2013 coup and again in September last year during the unprecedented protests in the country.

But even prior to the coronavirus outbreak, Egyptian prisons were notorious for their inhumane conditions. Since the military coup in 2013, over 600 people have died in Egyptian prisons due to unhygienic conditions they were held in.