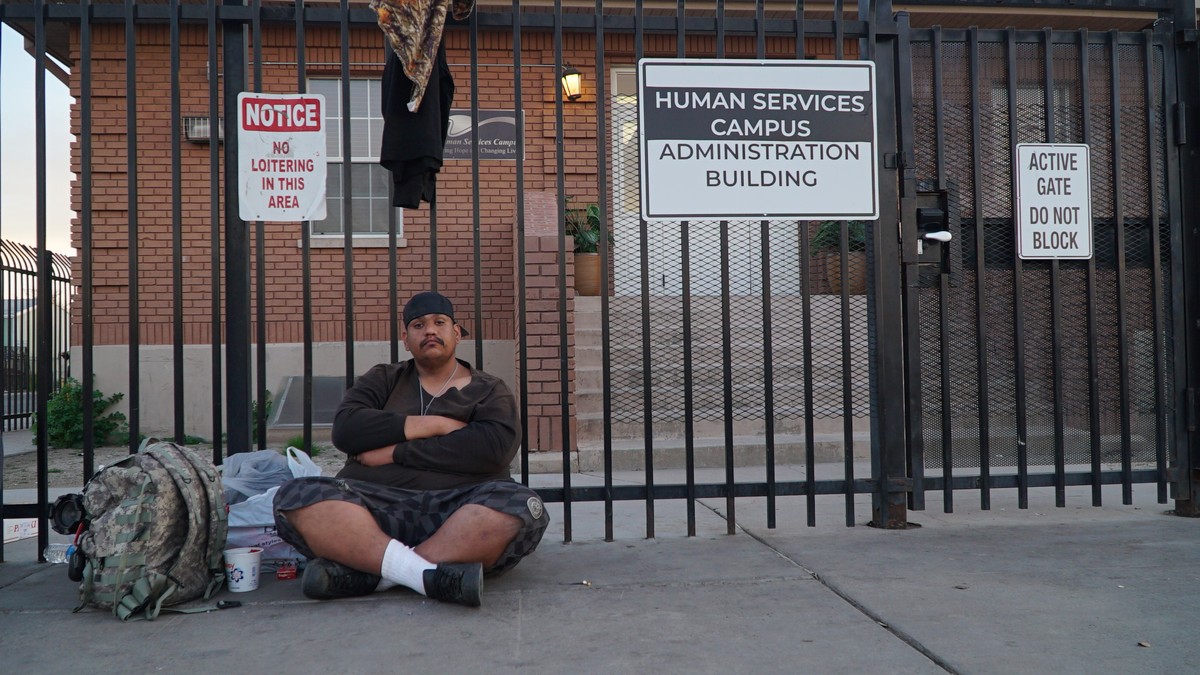 PHOENIX — Before daylight Tuesday morning, Maria Beltran and Cecil Joseph crept down the side alleys and residential roads of Phoenix in their white minivan. They pointed flashlights at open parking lots and vacant fields. As they drove past a Starbucks and glossy new lofts, they watched for any flashes of blue tarp, litter, or shopping carts.

Beltran and Joseph, both social workers with a Phoenix office of the Department of Veterans Affairs, were part of a legion of volunteers that fanned out across Maricopa County just before 6 a.m. Tuesday to count homeless people living on the street for a national survey called the “Point-in-Time” count. The volunteers joined thousands of advocates and government workers in cities across America — Los Angeles, New York City, Austin, and others — that have tallied their homeless populations in the past several days.

In Phoenix — where rent is rising faster than any other major city — the data collected will be critical to the government officials and advocates trying to figure out whether homelessness would continue to worsen in a state that’s long underinvested in affordable housing.

Assigned to just a tiny sliver of that vast county, the volunteers in Phoenix knew many homeless people would be actively trying not to be spotted. Over the course of a few hours on Tuesday, Beltran and Joseph located nine unsheltered homeless people. In one instance, a fellow homeless man trying to help the volunteers showed them where four people were sleeping: tucked behind some bushes near a highway overpass.

Other homeless people within the volunteers’ assigned “grid” were more conveniently sleeping by walking paths or in ditches, or nested in gravel patches by the road. But as the morning grew lighter, they’d retreat from view, which risked an inaccurate count. In the few hours the volunteers would have for the annual survey, they’d need to pose a list of questions to as many homeless people as possible: How old are you? Are you Hispanic? Are you a veteran? Did you age out of the foster care system? Where did you sleep last night? Do you drink? Do drugs? How long have you been out here?

“We’re trying to talk to homeless people so we can get more government resources,” Beltran explained to one Native American man sleeping in a ditch behind a gas station.

The survey, generally taken in late January at least every other year, is mandatory to receive government money to address homelessness and housing insecurity. Due to the government’s narrow definition of homelessness, the data doesn’t include homeless people crashing at motels or with friends, and it’s widely considered to be an underestimate.

Still, it’s often used by advocates to lobby on the state and local level for more services and better prevention. The trends revealed in the data, however flawed, are also used to guide federal homelessness policy. It’s one of the country’s best shots at understanding a recent upswing in “unsheltered” homelessness that’s swept much of the western U.S. in an otherwise booming economy.

For instance, in Maricopa County — the fastest-growing county in America with 4.4 million residents and a glittering hotspot for real estate investors — unsheltered homelessness has risen a staggering 200% since 2014. Among the U.S.’ 35 largest cities, Phoenix has the fastest-rising rents, according to data from Zillow. That makes it even harder to get people back into housing once they’ve been evicted or forced into a homeless shelter. Average rents have risen by 8% in the past year — an increase of $100 or more a month for some renters since December 2018.

“I don’t like the shelters. I’d rather be out here.”

Data available ahead of Tuesday’s count already hinted at the unsettling reality volunteers might find this year. The 2019 survey showed overall homelessness in Phoenix had increased by a whopping 18% since 2017, to approximately 6,614 people. And in the past year, homeless service providers had logged nearly 10,000 people trying to access services across Maricopa County, according to Amy Schwabenlender, executive director of the Human Services Campus, a hub for the local nonprofit, private, and government entities that serve the county’s homeless.

READ: Tons of new apartments are being built that almost no one can afford

“People move here because the rent is cheaper, so the landlords can start charging more,” Joseph explained as he drove his minivan past residential lofts advertising vacancies on Tuesday. The regular influx of newcomers winds up pricing some people out of their homes, moving them into poorer parts of Phoenix, until they eventually wind up on the streets.

As a result, Phoenix’s safety net is catching more and more people. The Point-in-Time count, if done correctly, would hopefully spot some of the people it had missed.

“We get people who say they just couldn’t afford rent anymore,” Joseph said.

The results of Tuesday’s Point-in-Time count — a combination of the street survey results and data inputted by local shelter providers — will be made public later this year, after they’re reported to the U.S. Department of Housing and Urban Development, compiled, and made public. Last year’s nationwide data revealed the nation’s rise in homelessness was driven in large part by western states, particularly California.

“Trying to do it on my own”

The first homeless person Joseph and Beltran spotted Tuesday was standing in the median of a busy intersection just before 6 a.m., wearing a camouflage vest and smoking a cigarette. He held a sign up to those driving by that read:“Please help a veteran.” Some offered spare change.

“Hi, would you like veteran resources?” Beltran asked as she approached.

“Yes,” the 51-year-old man, Stacey Sizemore, responded. He said he’d looked on Google for help but didn’t immediately know where to go. He needed assistance finding housing after his landlord told him he’d get evicted if he didn’t leave. Plus, he has a criminal record, he explained, which makes finding housing more difficult.

“I don’t like the shelters. I’d rather be out here,” Sizemore said.

The region’s largest emergency shelter, Central Arizona Shelter Services in Phoenix, has a capacity for 470 people and is nearly always full. Schwabenlender, who runs the campus where the shelter is based, said her workers recently counted more than 400 people sleeping in tents just outside. They were hoping for a bed while still accessing a plethora of nearby services — legal help, housing assistance, mail services, dental work, and more — in the meantime. Schwabenlender said that Phoenix, like many other cities across the country, desperately needs more available shelter beds.

Even so, Sizemore said, his friends are outdoors with him, and the shelters can be hard to access without reliable transportation. He even led Beltran and Joseph to a nearby overpass where four people he knew were sleeping in the bushes, so they could get a more accurate count. The volunteers hadn’t spotted the small, well-concealed campsite while driving by.

“I’ve learned who my real friends are,” he added, before trying to wake them up. They didn’t stir.

Volunteers aren’t supposed to wake up homeless people during the count if they can avoid it. So Beltran wrote down what Sizemore could tell her about the people in the bushes, instead. One man was 18 or 19 years old, and another was a 33-year-old woman. Beltran thanked Sizemore, and another volunteer came to pick him up to help assess his needs.

READ: A homeless man got himself arrested just so he’d have a warm place to sleep

About 90 minutes later, the volunteers spotted a blue tarp draped over a shopping cart near the side of the road. A pair of blue jeans hung off a nearby fence. They quickly pulled over to the side of a busy road, put their hazard lights on, and jumped out of their car to talk to a 38-year-old, Hispanic woman named Jackie. Did she have health problems? Did she do drugs? How long had she been homeless? Why wasn’t she in shelter?

“A lot of the time I just don’t know where they are,” Jackie, who declined to give her last name, said quietly.

Beltran pointed out nearby resources for women, and Jackie thanked her as she opened up a can of cranberries for breakfast. Women can be more difficult to find during the Point-in-Time count, especially if they have kids — an extra incentive to hide: Child welfare services might separate family members if they’re found to be homeless. That’s another reason why advocates and experts gripe about the Point-in-Time Count’s shortcomings.

“Have a good day!” Jackie said as she dipped back under her tarp.

The volunteers found Michael Stephenson next. He was tucked between some bushes nearby and eating restaurant packets of jelly. The 64-year-old Navy veteran initially said he didn’t want help, but then said he’d answer the survey questions nonetheless.

“Trying to do it on my own,” he explained.

Beltran and Joseph launched into their pitch. He could go to the local veteran resource center to have all his needs met. He could shower and get a meal, and they’d find him a clean set of clothes. He was honorably discharged from the Navy, so he’d be a great candidate for government housing vouchers that could help him make rent. Staff with the Department of Veteran Affairs could help provide health care too.

Stephenson explained he’d had a “hard life.” This was his first time being homeless, and he’d been on the streets ever since his landlord of 24 years died a year ago. He received $1,500 in Social Security and pension benefits each month, but it wasn’t enough to get a new place of his own.

“You’ve got to have a reference,” he said.

“We can help with that,” Beltran responded.

Stephenson was also worried about his homeless friend Donna. He wanted help for her, too, he said. But he’d be willing to go to the veteran center if Joseph came back in the white minivan and picked him up after the Point-in-Time count ended before noon. He began folding his many blankets into perfect squares and packing up his belongings to prepare for the journey ahead.

“Like your corners on that, sailor,” Joseph joked. Stephenson laughed.

He wasn’t there when Joseph returned.