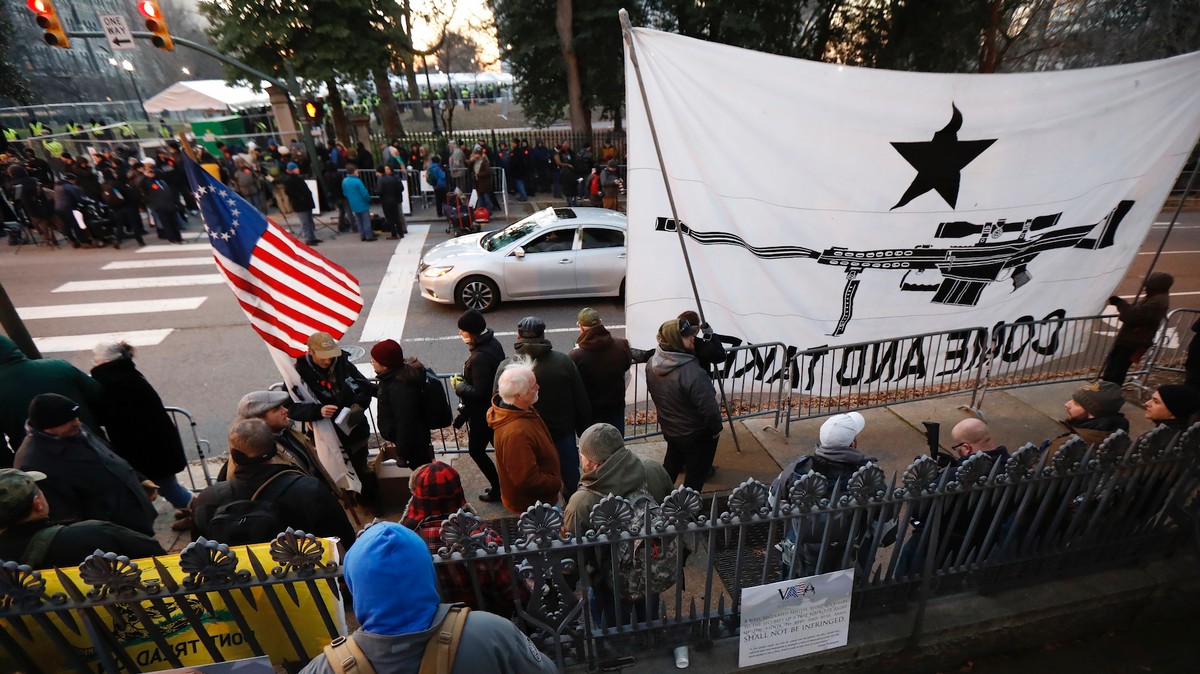 RICHMOND, Virginia — Thousands of pro-gun activists rallied near the Virginia Capitol building on Monday, many armed and wearing stickers reading “Guns Save Lives.” The rally, which is attended by armed militia members and far-right extremists, had the city on edge and fearing violence. But it was an upbeat and calm day.

The rally was organized by Virginia Citizens Defense League (VCDL), a pro-gun nonprofit, and was originally billed as an open carry affair and an opportunity to speak up against gun control legislation.

“We came here because a tyrannical king is trying to take away our Second Amendment rights,” said Jerome Bell, 53, who said he’s from Virginia Beach and running for Congress.

In recent weeks, what began as a straightforward pro-gun rally started looking like a mixed buffet of right-wing ideologies. Infowars host Alex Jones had said he was planning to attend, and on Sunday evening he held a small protest by the Capitol, joined by the Proud Boys, a right-wing group known for violent clashes. Members of the American Guard, a white nationalist group, were also reported to be there, as well as the Pennsylvania Light Foot Militia. Right-wing activist Joey Gibson, who runs Pacific Northwest-based group Patriot Prayer, tweeted that he was planning to attend Monday’s rally.

But most concerning of all were reports last week that members of a hardcore neo-Nazi group called The Base may have been planning to attend the rally — and use it as an opportunity to further their own agenda of creating chaos through violence, to start the “boogaloo,” a term they use to refer to the coming civil war. Local and federal law enforcement rounded up at least seven allaged members of The Base in the past week, at least three of whom were found with large amounts of ammo and improvised weapons, and had discussed firing on rallygoers from overhead, according to the Wall Street Journal.

READ: This conspiracy theory is firing up pro-gun activists right before their huge rally.

There was worry about possible violence like what happened at the “Unite the Right” rally in August 2017 in Charlottesville, just 70 miles from Richmond. “Everyone’s looking back at Charlottesville with trepidation about today’s event,” said Jimmy Frost, 55, who took a bus up from Virginia Beach this morning with other attendees. “But I think in that case both sides went looking for a fight.”

“Patriots didn’t start Charlottesville; it was crazy leftists,” Bell said. “There are too many people here who love America.”

Frost said he hopes the turnout will send a clear message to Virginia Democrats who are backing gun control and just passed three measures in the state Senate this month. “Just like sending a carrier to the Middle East, this is a show of force.”

Gesturing at the maze of barriers set up around the Capitol, Frost added, “These fences and all this mess will be Ralph Northam’s legacy.”

READ: Why this antifa group is siding with thousands of pro-gun conservatives in Virginia.

VCDL had warned the state that as many as 100,000 people could show up. A Facebook page for the event had 5,000 attending — and the group had helped coordinate at least 60 buses to shuttle attendees into Richmond from different parts of Virginia.

Gov. Northam declared a state of emergency on Wednesday and banned guns from the Capitol grounds, irking the pro-gun protesters who felt they were being punished for wanting to exercise their rights. Many rally attendees came armed and have gathered outside the Capitol grounds, where the ban doesn’t apply.

“We are law-abiding citizens,” said Justin Dorton, 33, who drove up from North Carolina for the rally and carried an AR-15. “People have planned this for a long time. The escalation was by the governor.”

“Ralph is afraid of something that’s not really there,“ said Rusty Ward , 64, from Mechanicsville, Virginia. He had left his gun at home and wasn’t happy about it.

At a dinner for militia groups on Sunday evening, speakers lambasted the governor but ultimately stressed that keeping cool heads and holding a peaceful event would work in their best interest. “If we have a nice time and have fun, the governor’s credibility will be destroyed,” said VCDL executive member Greg Trojan. “Don’t let the evil bastard win.”

How to Watch the 2020 Brown & Black Democratic Presidential Forum