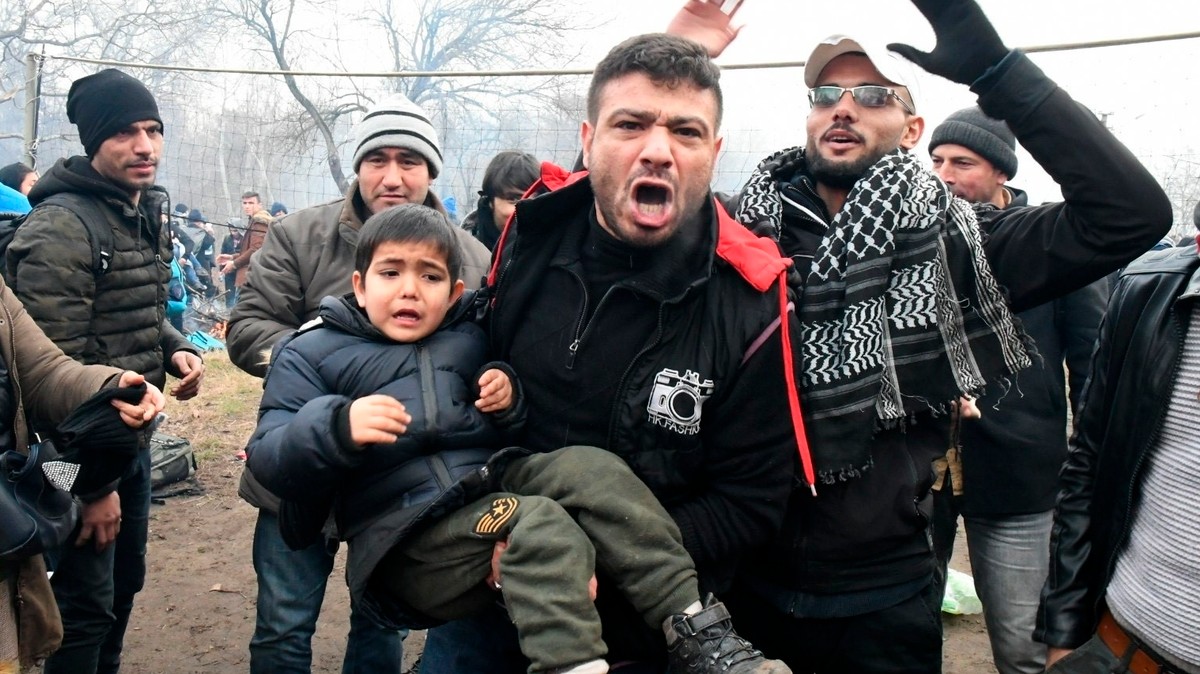 Greek police fired tear gas on crowds of Syrian refugees attempting to cross illegally from Turkey Monday, as they battled to stop a wave of migration unleashed by Turkish President Recep Tayyip Erdogan’s announcement he had opened the gates to Europe.

Tens of thousands of migrants have flocked to Turkey’s northwestern frontier with Greece and Bulgaria since Turkish authorities said last week they were dropping border controls on their territory. Turkey has vowed to flood Europe with refugees, unless Europe does more to help it handle the fallout from the war in Syria.

Turkey has taken in 3.7 million Syrian refugees, and is expecting another big wave of people fleeing a Russian-backed Syrian offensive in Idlib province, where thousands of Turkish troops are supporting rebel forces. Analysts say Erdogan’s threat may also be an attempt to get greater support from the West for its Syrian offensive, in which it lost 34 troops on a single day last week.

READ: Turkey is threatening to flood Europe with refugees after losing dozens of soldiers in Syria

On the European side, the borders remain closed, leaving the new arrivals at the border stranded in brutal conditions. In their attempts to enter, groups of would-be migrants have variously tried to force their way across, some reportedly throwing stones or wielding metal bars. Others have pleaded with border guards or attempted to evade border controls by wading through rivers.

On Monday, reports emerged that the current wave of migration towards Europe had turned deadly. Turkish state media reported that a 22-year-old Syrian man from Aleppo was killed when Greek border guards shot him with rubber bullets as he was attempting to sneak across the border Monday.

And Greek officials reported that a boy aged about 6 drowned when a dinghy carrying 48 migrants capsized en route to the island of Lesvos. According to reports, the vessel had been accompanied by a Turkish patrol boat while in Turkish territorial waters, before deliberately overturning to trigger a rescue operation from Greek authorities.

Turkish Interior Minister Suleyman Soylu claimed Monday that nearly 120,000 migrants were attempting to enter Europe, while international agencies monitoring the situation along the border say the numbers are hard to track, but are more likely in the tens of thousands.

Lanna Walsh, spokeswoman for the International Organization for Migration in the Turkish border province of Edirne, told VICE News the group’s monitors had observed about 13,000 migrants at formal crossing points along the 132-mile Turkey-Greece border Saturday, and 10,000-15,000 at a single crossing the following day.

“We can safely say it’s in the tens of thousands and likely increasing,” she said. Many migrants, realizing the borders were firmly closed, are now headed to Turkey’s western borders where they are attempting to cross to the Greek islands by boat.

Greek authorities say more than 1,000 people have attempted to reach the islands by sea in recent days. Turkish officials claimed Monday the boats were being met with Greek coastguards attempting to push them back.

Many migrants have reported that Turkish officials drove them to the Greek border in buses, before directing them to where they could cross into Europe. Greece’s government has accused Ankara of orchestrating a “sudden, massive, organized and coordinated” attempt to breach the country’s borders.

“Turkey, instead of curbing migrant and refugee smuggling networks, has become a smuggler itself,” the Greek government said in a statement.

READ: Greece and Turkey are playing dangerous war games on the Aegean Sea

Greece has declared it highest alert level, deploying soldiers along its border, where security forces used tear gas and water cannons to repel about 15,500 attempted crossings over the weekend. Greece’s government also announced Sunday it had suspended EU asylum law for the next month. That means no asylum applications will be accepted from migrants entering the country illegally, and they will be summarily deported back to the country they entered from.

But amid calls from Europe for Turkey to abide by its 2016 agreement with the European Union to limit and control illegal migration, and combat criminal smugglers, Erdogan was unrepentant Monday.

In a televised speech, he vowed that the flow of migrants towards the Greek border would only grow in coming days.

“Hundreds of thousands have crossed, soon we will reach millions,” he claimed.

“After we opened the doors, there were multiple calls saying ‘close the doors’,” he said. “I told them, ‘It’s done. It’s finished. The doors are now open. Now, you [Europe] will have to take your share of the burden.’”

Turkish officials have said the decision to open the gates is linked to the offensive in the Syrian province of Idlib, where Turkey is supporting rebels against a massive offensive by Russian-backed Syrian government forces, and lost 34 troops in air strikes last Thursday.

Fahrettin Altun, Erdogan’s communications director, said Ankara had changed its focus to deal with a new wave of refugees fleeing the Idlib offensive, “instead of preventing refugees who intend to migrate to Europe.”

In response to last week’s heavy losses — the worst suffered by the Turkish military in a single day since 1993 — Turkey ramped up its operations in Syria over the weekend, shooting down two Syrian planes in Idlib and striking a military airport in Aleppo province.

Cover: Syrian refugees shout as they try to cross the border between Turkey and Greece at the Pazarkule border post, in Turkey. Turkey announced that it would open border gates for a period of 72 hours to allow refugees to cross into European countries after thirty three Turkish soldiers were killed in a Syrian air raid in Idlib overnight. Burcu Okutan / Sputnik via AP

The Supreme Court Is Going to Determine Whether Obamacare Survives — Again

Pete Buttigieg Is Dropping Out of the Race