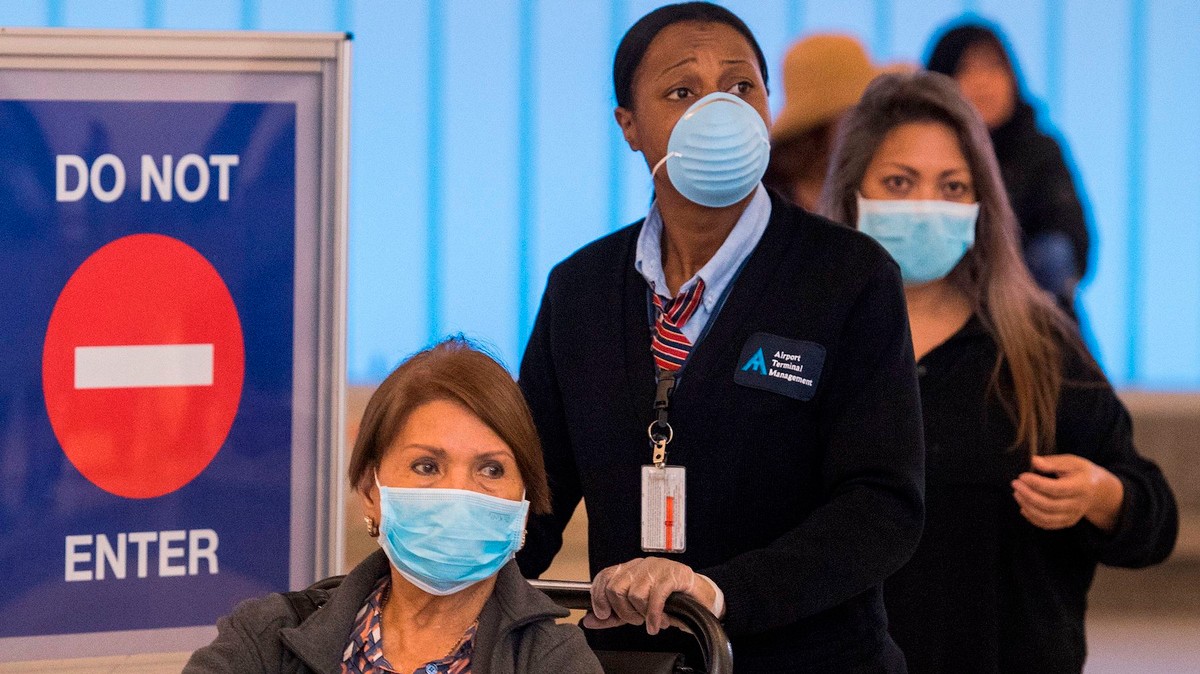 The effects of coronavirus continued to ripple across the world on Sunday, with more countries going on lockdown, American airports in chaos, and officials everywhere taking increasingly drastic measures as they scramble to contain the virus.

Dr. Anthony Fauci, director of the National Institute of Allergy and Infectious Diseases in the U.S., said he would consider supporting a national lockdown on bars and restaurants to force containment of the rapidly spreading virus. “Whatever it takes to do that, that’s what I’d like to see,” Fauci said on CNN on Sunday. “We need to be very serious about — for a while, life is not going to be the way it used to be in the United States.”

Nearly 160,000 people globally have been infected by the coronavirus, which causes the disease COVID-19, and almost 6,000 are dead as a result.

Since testing began to ramp up in the U.S., the number of confirmed cases has also skyrocketed, tripling from 1,000 cases on March 10 to 3,000 by Sunday.

Officials in New Jersey and New York mulled drastic measures as the number of cases in those states continued to grow. The mayor of Hoboken, New Jersey, will implement a curfew starting Monday requiring all residents to stay in their homes between 10 p.m. and 5 a.m. unless they are required to work during those hours. All bars and restaurants are also no longer allowed to serve food.

During a call in to a New York City radio station, New Jersey Gov. Phil Murphy didn’t rule out the possibility of a statewide lockdown, or a statewide curfew. “These are the things we have to consider,” Murphy said. “We have no choice.”

READ: Tenants and landlords are terrified Coronavirus will mean evictions.

New York Gov. Andrew Cuomo said in a tweet Saturday that two state lawmakers had tested positive for COVID-19. He also wrote an op-ed for the New York Times calling on President Trump to mobilize the U.S. Army to help build and equip temporary hospitals to prepare for the expected wave of sick people requiring hospitalization.

“States cannot build more hospitals, acquire ventilators, or modify facilities quickly enough,” Cuomo wrote. “At this point, our best hope is to utilize the Army Corps of Engineers to leverage its expertise, equipment and people power to retrofit and equip existing facilities, like military bases or college dormitories — to serve as temporary medical centers.”

Meanwhile, on Saturday, Georgia became the second state to postpone its upcoming Democratic primary due to the coronavirus, following Louisiana.

And, yet another TSA agent has tested positive for the virus, this time in Orlando, Florida. They are the sixth officer to test positive, after four in San Jose and one in Fort Lauderdale.

Expanded coronavirus screening procedures at 30 major U.S. airports led to chaotic scenes of crowds and hours-long lines over the weekend. The Trump administration announced additional screening procedures for Americans flying back from Europe last week, in addition to banning Europeans from traveling to the U.S. for 30 days. Restrictions on travel from the U.K. go into effect Monday night.

The airport crowds sparked outrage on social media, with many pointing out that it seemed to fly directly in the face of the consensus that the public has to exercise “social distancing” if the virus is to be contained.

“We knew when the president gave the orders that European travel back to the United States was going to be cut off, that there would be an influx of people, Americans and others, that would come before the final cutoff,” Illinois Gov. J.B. Pritzker said on CBS’ “Meet the Press” on Sunday, in response to scenes from Chicago’s O’Hare airport. “So what should have happened? They should have increased the Customs and Border Patrol numbers. And they should have increased the number of CDC personnel on the ground doing those checks. They did neither of those.”

In a Saturday briefing, President Trump raised the possibility of a domestic travel ban and said his administration had considered the option. Dr. Fauci seemingly contradicted Trump’s remarks, saying that a domestic travel ban was an unlikely measure in the immediate future, and that such restrictions hadn’t been seriously discussed.

Spain announced a nationwide lockdown on Saturday in response to soaring numbers of confirmed cases and deaths in the space of a week. On Saturday, they had 7,753 cases and 288 deaths — compared to 589 cases and no deaths only one week earlier. Many observers remarked on the eeriness of the usually bustling cities abruptly transformed into ghost towns over night.

The lockdown came after similar measures were taken by Italy less than a week earlier. Residents are ordered to stay home and only permitted to go out to buy food or medicine, visit medical centers, go to work, or go to the bank. All non-essential shops, bars, restaurants, and entertainment centers like movie theaters were also ordered closed under the declaration of emergency.

READ: Coronavirus could cause domestic abuse to spike.

France, where nearly 100 people have died, was also on lockdown as of Saturday — and French officials are ordering landmarks, cafes, restaurants, and cinemas to close down.

Morocco’s foreign minister said in a statement Sunday that they were suspending all inbound and outbound international flights until further notice.

The disease has also now spread to at least 18 countries in Africa, the newest being Kenya, Ethiopia, Sudan, and Guinea.

Cover: Passengers wear face masks to protect against the Coronavirus after arriving at the LAX airport in Los Angeles, California on March 5, 2020. (Photo by Mark RALSTON / AFP) (Photo by MARK RALSTON/AFP via Getty Images)

Italy Reports 368 Coronavirus Deaths in a Single Day Despite Lockdown