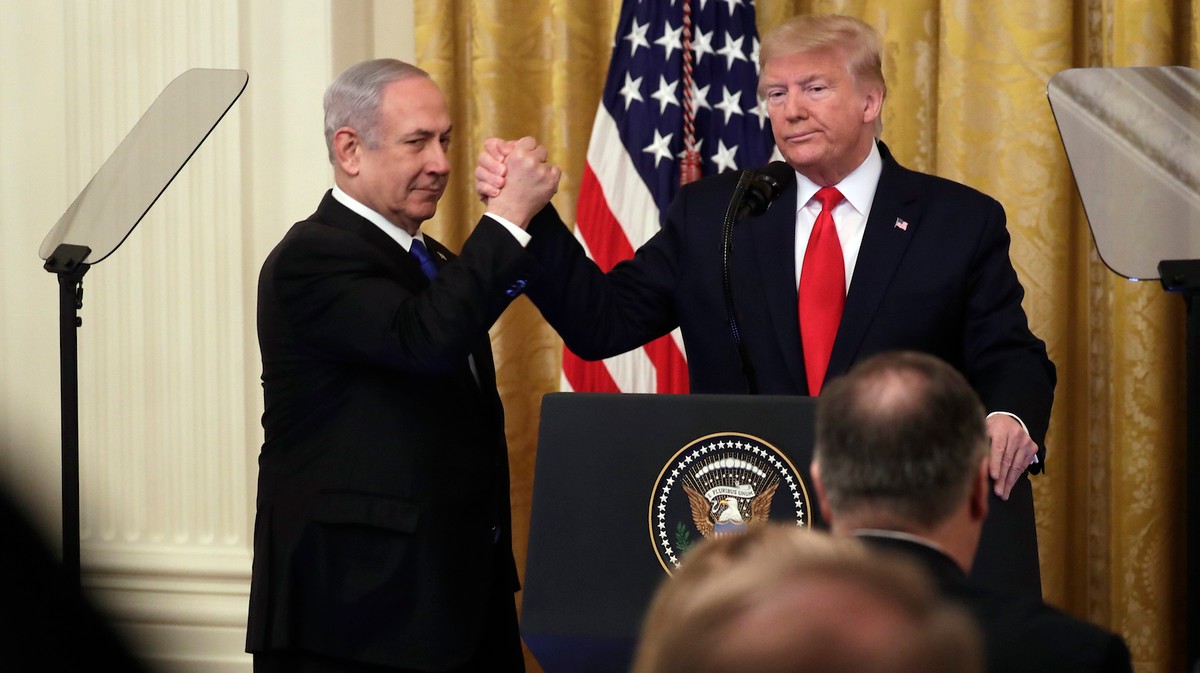 President Donald Trump announced his long-awaited Middle East peace plan on Tuesday. But while he heralded it as a huge step toward peace between the Israelis and the Palestinians, the plan is widely regarded to favor Israel, and it’s already been rejected by Palestinian leadership.

Standing next to Israeli Prime Minister Benjamin Netanyahu, with no Palestinian representatives present, Trump affirmed his alliance with the Jewish state. “Israel is a light unto the world,” he said. “The hearts and history of our people are woven together.”

After speaking effusively and at length about what the plan would do for Israel, to many rounds of applause by administration officials and foreign ambassadors, Trump switched to its impact on Palestinians. “It is only reasonable that I also have to do a lot for the Palestinians, or it just wouldn’t be fair,” he said, adding, “Now don’t clap for that, OK? But it’s true, it wouldn’t be fair.”

The administration is billing the plan as a dramatic reshaping of the Palestinian territories that could offer a path to statehood if the Palestinians meet a set of requirements. But it was put together without input from Palestinians, and the prime minister of the Palestinian Authority Mohammad Shtayyeh has already called for international powers to boycott the plan. Thousands protested in Gaza on Tuesday ahead of the plan’s release.

READ: The Middle East was already a powder keg of misinformation. Trump just lit the match.

The plan proposes to incorporate Israeli settlements in illegally occupied areas of Palestine into Israel proper, and give Israel security control over all territory seized from Palestinians in 1967; it won’t require Israel to move any of its settlements. It also gives Israelis control over a unified Jerusalem, as the capital of the Israeli state. The Trump administration also said that, as part of the agreement, Israel has agreed not to build any new settlements for four years while peace negotiations are underway.

The Palestinians are given some limited autonomy in the West Bank and East Jerusalem, and a roadmap to statehood over several years if they renounce violence and agree to negotiate with Israel. Trump said his plan would establish a Palestinian capital in East Jerusalem, and that the U.S. would open an embassy there.

But Palestinians have already voiced deep skepticism about how the plan benefits their overall position. The president of the Palestinian Authority, Mahmoud Abbas, will hold an emergency meeting of the Palestinian leadership on Tuesday, and the Israeli military is bracing for protests with some Palestinian factions calling for a “day of rage” in response to the plan.

Trump and Netanyahu’s press conference took place against a bizarre backdrop — as the president’s defense team made final arguments in a Senate trial on whether he should be removed from office for abuse of power, and with Netanyahu just indicted on corruption charges in his own country.

READ: Let’s check in on Trump and Kushner’s big Middle East peace plan, shall we?

The 50-page plan was largely developed by Trump’s son-in-law, Jared Kushner, a real-estate mogul with no prior diplomatic experience. Kushner has taken a leading role in trying to break the impasse between Israelis and Palestinians, spending months working on what’s become known as the “deal of the century.”

Kushner’s plans got derailed in December 2017 when Palestinians walked away from the negotiating table following Trump’s decision to break with decades of U.S. policy and recognize Jerusalem as the capital of Israel. The White House move sparked intense protests, culminating in the worst day of violence since the 2014 war when the U.S. opened its new embassy in Jerusalem.

This plan is just the latest in decades of attempts by the U.S. to broker peace between Israelis and Palestinians. President Jimmy Carter tried to resolve the conflict at Camp David back in 1978; President Bill Clinton achieved a handshake in 2000 between Israeli Prime Minister Ehud Barak and Palestinian leader Yasser Arafat, but no agreement was reached; President George W. Bush hosted a failed round of talks at Annapolis; and former Secretary of State John Kerry tried to restart the peace process in 2013.

“All prior administrations from President Lyndon Johnson have tried and bitterly failed,” Trump said. “But I was not elected to do small things or shy away from big problems.”

The U.S. has little recourse to actually implement any of the proposals in this plan — it can support Israel’s sovereignty over parts of the West Bank, but without international support, there is a limit to how much any of this means. Trump has said other Arab states in the region back his plan.

The announcement of the plan coincides with Israel gearing up for its third election in a year: The last two elections proved inconclusive, with neither Netanyahu nor his centrist challenger, Benny Gantz of the Blue and White Party, able to form a governing coalition. The timing of the plan’s release could be interpreted as a lifeline for Netanyahu — it’s reportedly been finished for months, with the Trump administration sitting on it, waiting for Israel to form a government.

Last week, Trump issued both Netanyahu and Gantz surprise invitations to the White House to come to review the plan — on the same day that Netanyahu faced a key procedure in his controversial request for parliamentary immunity against corruption charges.

After Trump spoke, Netanyahu took the mic, praising Trump for being a staunch ally to the Israelis.

“For too long, far too long, the very heart of the land of Israel, where our patriarchs prayed, our prophets preached, and our kings ruled has been outrageously branded as illegally occupied territory,” Netanyahu said. “Well, today, Mr. President, you are puncturing this big lie.”

He also gave a hat tip to Trump’s team of negotiators. “That helps if you have these real-estate people,” he said. “They can come up with things normal human beings don’t think about.”

This is What Iowans Really Care About Ahead of the Caucus

Who’s Turning Out for Biden Events in Iowa? People Desperate to Beat Trump