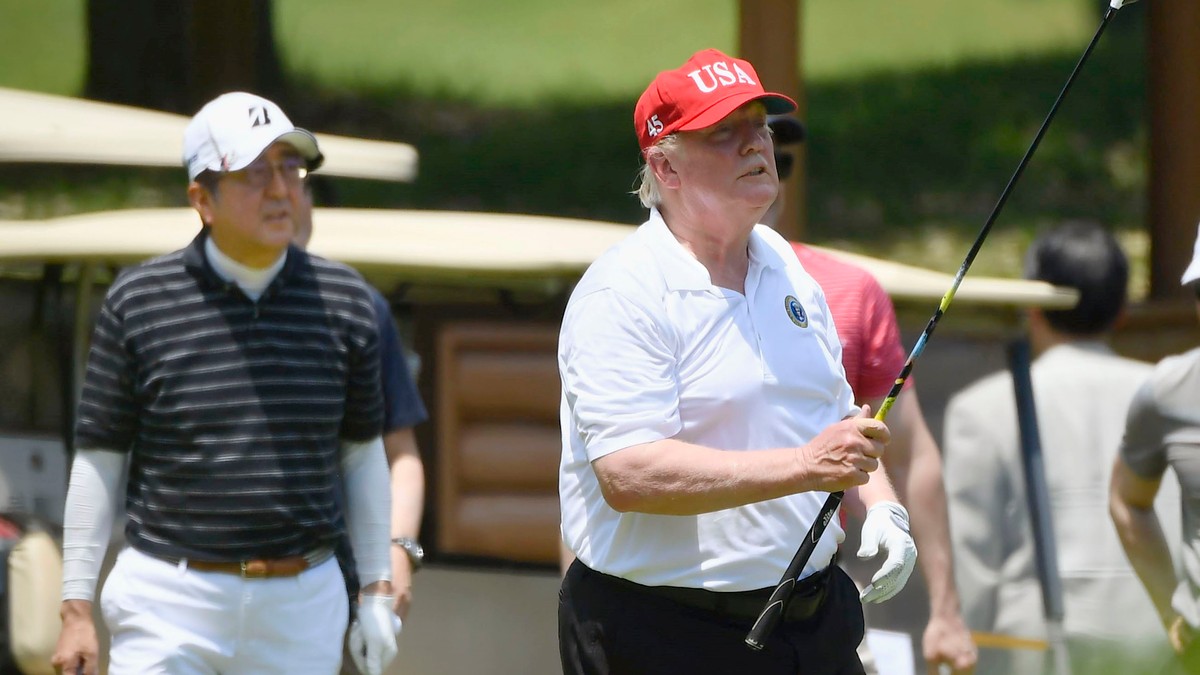 WASHINGTON — President Trump’s golf empire could benefit from taxpayer-funded bailout loans if a pitch from the golf lobby wins support in Congress.

An influential golf political advocacy group with ties to Trump’s company has reached out to members of Congress with a proposal to make federal coronavirus rescue loans more widely accessible to the golf world, including a change that could enable Trump’s company to borrow millions if accepted.

The recent economic downturn has shuttered golf courses across the country and hammered Trump’s company, which relies on income from over a dozen golf courses. Trump’s golf holdings accounted for roughly half of his reported 2018 income of $440 million, and the crisis is costing his properties an estimated $1 million a day in lost revenue. Trump’s flagship properties in Florida announced hundreds of temporary layoffs this month.

Congress has moved to forbid Trump from awarding himself crisis loans, but changes to the rules favoring the golf business could empower him to do so anyway.

The Trump Organization, like other golf businesses, is too large to qualify for the emergency small business loans, known as PPP loans. But the lobbying group, We Are Golf, floated the idea of allowing each golf course to apply individually, even if its owner is too big, according to statements by the group on its web site and in an email to VICE News.

“We Are Golf has reached out to congressmen and women, including Senator [Marco] Rubio, to ensure the golf industry is represented appropriately as they consider adjustments to the PPP program in forthcoming legislation,” a group spokesperson wrote to VICE News Tuesday.

Asked about the possibility that the president’s companies could benefit, the spokesperson said that wasn’t the group’s intention.

“We Are Golf’s activities have not been focused on that, just representing the industry as a whole,” he wrote.

The possibility that Trump might try to divert government coronavirus emergency funds to save his own business has been a hot-button issue in Washington DC, and Democrats added language to the $2.2 trillion CARES Act in March that explicitly blocks Trump’s companies from one large lending program established by the law.

But that ban does not extend to the small business lending program, according to The New York Times and other outlets.

The PPP program caps borrowers at 500 employees, and Trump’s main company, the Trump Organization, owns more than 500 separate businesses. But several Trump golf courses appear to be smaller, listing the number of employees on LinkedIn between 50 and 200 people, including properties in Washington DC, Westchester, West Palm Beach, and the Bronx.

Those figures suggest several of Trump’s individual golf properties would become eligible for loans if the change went through.

The golf lobbyists’ outreach came amid frenzied negotiations in April over an update to the $350 billion PPP program. The Senate approved a draft bill on Tuesday that adds an extra $310 billion in funding and doesn’t include any obvious carve-out for the golf industry. But the impact of complex legislation can take time to emerge, and further rounds of coronavirus legislation are coming.

Allowing individual golf courses to apply for small business loans would mirror a benefit already enjoyed by restaurants and hotels. Large national chains have used that exception to receive millions in loans from the program, including Shake Shack and Ruth’s Chris Steakhouse. The original CARES Act lets food and accommodation outlets qualify so long as they employ fewer than 500 people in one physical location, even if they’re owned by a larger company.

We Are Golf said that some golf industry companies believe they should get the same treatment as restaurants and hotels.

“A significant portion of the country’s golf businesses currently are not able to access PPP in the same manner that multi-location NAICS 72 hotel and restaurant businesses are,” the spokesperson wrote, referring to the North American Industry Classification System code for the dining and accommodation industry, 72. The CARES Act spells out who gets the benefit using the NAICS code.

“There are some in our industry along with many others in the NAICS 71 categories of businesses that believe we should get the same opportunities to access PPP loans that are afforded to multi-location restaurants and hotels in the CARES Act,” the spokesperson said, referring to the code for golf courses and other recreational attractions, 71.

On April 9, the group sent Sen. Rubio a letter on April 9 advocating the inclusion of golf properties covered by NAICS code 713910, according to a statement on its website. Rubio’s team reached out to hear more, the group said.

“Sen. Rubio’s Chief of Staff contacted us today with an opportunity to provide evidence to further our position of supporting these potential modifications,” the statement said. Rubio’s office didn’t return a request to comment from VICE News.

We Are Golf was founded in 2009 by a coalition of national golf organizations, including the National Golf Course Owners Association, NGCOA.

The Trump Organization didn’t return a request for comment on this story, and there’s no evidence Trump or his company knew about the lobbying effort.

Trump said on Monday he hasn’t received any PPP loans.

“Well, I know one thing: I didn’t get any, that’s for sure,” told a White House briefing. He’s also explicitly refused to promise not to accept one in the future.