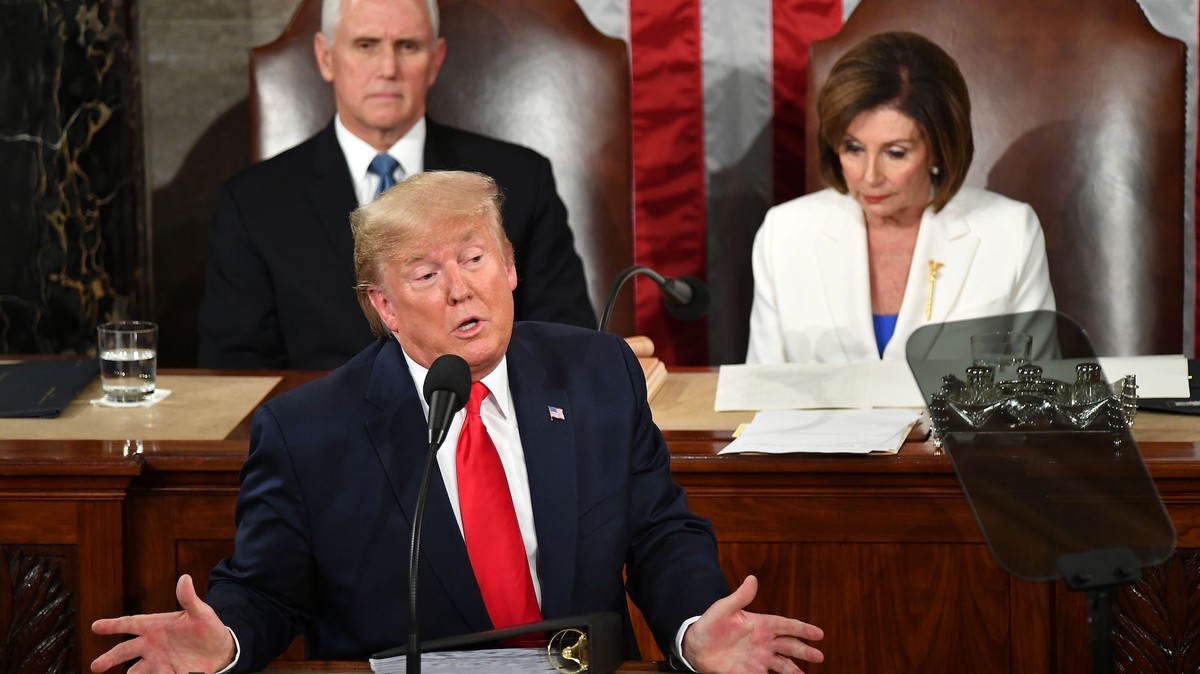 WASHINGTON — In his State of the Union address President Trump did what Iowa officials failed to do Monday: He kicked the 2020 election season into full gear.

Even with his historic impeachment trial still hanging like an ominous cloud over the Capitol — and the nation — inside the House chamber it felt more like a raucous Trump rally than a normally staid State of the Union address.

The president’s address was coated with the hyperbole that endears him to his far-right base — like highlighting an anti-abortion proposal that’s red meat to most conservatives while ripping on former President Obama’s legacy before touting his own, which brought audible groans and some muted boos from most all lawmakers on the Democratic side of the chamber.

“In just three short years, we have shattered the mentality of American Decline and we have rejected the downsizing of America’s destiny,” Trump said. “We are moving forward at a pace that was unimaginable just a short time ago, and we are never going back!”

Trump came out swinging as he laid out the case he plans to present to the American people over the next 10 months. Spoiler: While he’s proud of the dozens of environmental and health protections his administration has unwound, the 2020 battle seems like it will focus on socialism.

“We will never let socialism destroy American health care,” Trump said after calling out more than 130 Democrats for endorsing Medicare for All proposals.

With Trump, it’s all about the optics, hence he highlighted the nation’s only sitting African American Republican Senator, Tim Scott of South Carolina. along with other African American guests and he even invited Juan Guaido — who he called “the true and legitimate leader of Venezuela” — to sit near the First Family during the address.

Not to be outdone when it comes to optics, most House Democratic women, including House Speaker Nancy Pelosi, came wearing bright white suit coats in honor of the suffragettes who came before them and who they vow to carry out the legacy of while fighting what they call Trump’s anti-woman agenda.

At one point Pelosi visibly tore up her copy of the State of the Union, given to both the speaker of the house and Vice President Mike Pence.

Democrats were moved by the president’s rhetoric, with at least one yelling, “Come on!” when Trump claimed he helped get millions of people off of food stamps (when in reality his administration has kicked tens of thousands off the federal rolls) or when he touted his focus on “this blue collar economy,” which brought an audible “No, no, no” from an unrecognizable Democrat in the chamber.

Democrats had predicted as much. “I expect the beginning of launching of his campaign,” Sen. Bob Menendez (D-N.J.) told VICE News just before the address:

With impeachment still hanging over the Senate side of the Capitol lawmakers in both parties are eager to focus on their legislative agendas going into November, especially Republicans who never wanted an impeachment trial to begin with, let alone one with witnesses and documents. That’s why they’re hoping the two sides can move past impeachment once they vote on it Wednesday.

“I think you turn the page tonight,” Sen. Mike Braun (R-Ind.) told VICE News. “I think when we settle down, get the passion down, we’ll get back to where before impeachment crystallized there was a lot of good committee work, it was just all on the shelf the last three to four months.”

That’s wishful thinking to most Democrats.

“I don’t think there’s too much possible,” Menendez said on the chances for bipartisan compromise in 2020.

Like most Democrats, Menendez says the healing for their side can’t begin until Trump at least admits wrongdoing, which he didn’t do this eve.

“He could recognize that at a minimum what he did was wrong, ill advised, you know, be somewhat repentant – that might be helpful, at least to the nation,” Menendez said. “You know, it doesn’t satisfy the ultimate question of how one will vote on the ultimate impeachment question, but it would be helpful.”

Cover: President Donald Trump delivers the State of the Union address flanked by US Vice President Mike Pence and Speaker of the US House of Representatives Nancy Pelosi (R) at the US Capitol in Washington, DC, on February 4, 2020. (Photo: MANDEL NGAN/AFP via Getty Images)

Shadow’s CEO Is Very Sorry For Screwing Up Iowa, But Still Won’t Disclose Its Funders