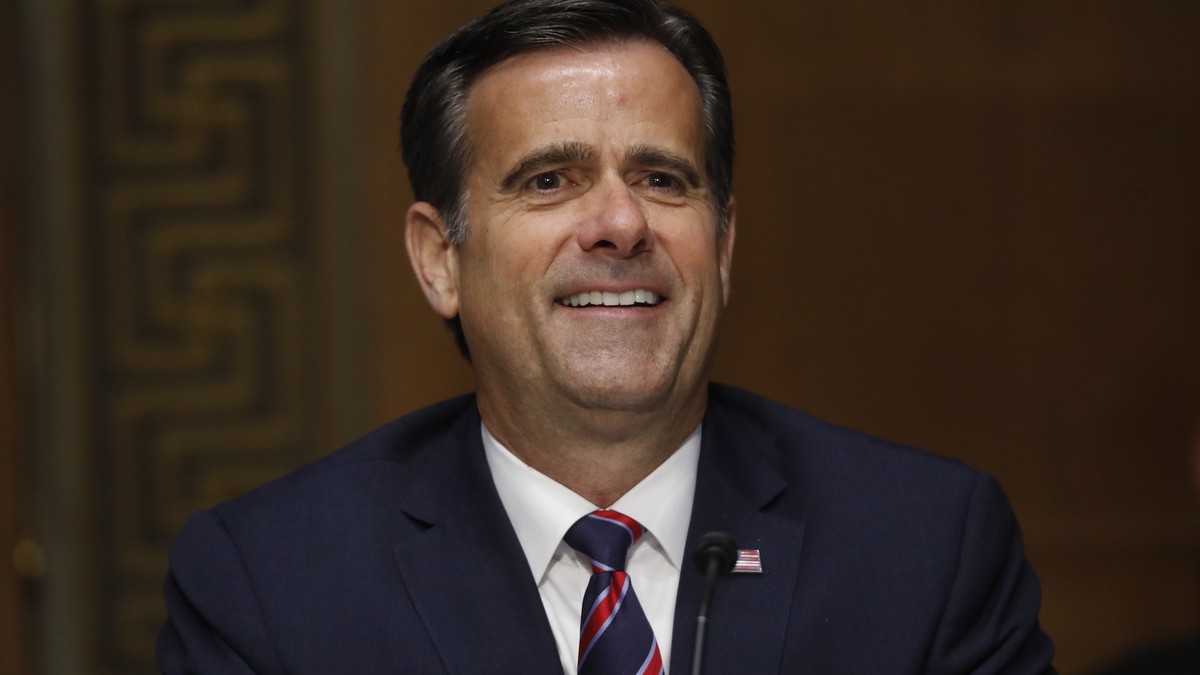 WASHINGTON — President Trump’s pick to lead U.S. intelligence, Rep. John Ratcliffe, appears to have scrubbed some of his most controversial boasts about his national security background from two websites around the time Trump nominated him to the post for a second time last winter.

If he does get the job as America’s spymaster, Rep. Ratcliffe may want to consult U.S. intel experts about something called the “Wayback Machine” — which allows anyone with an internet connection to see how websites used to look, even after you’ve deleted the embarrassing stuff.

The apparent clean-up job marks the latest twist in Ratcliffe’s scandal-prone quest to become Director of National Intelligence, which had appeared to collapse spectacularly last summer when questions emerged about Ratcliffe padding his national security resume with exaggerations about his time as a prosecutor east Texas, and about his reputation for dogged partisanship as a member of Congress.

READ: Trump’s Intel Pick Says He “Put Terrorists in Prison.” It May Be Just One Guy with a Fake Bomb.

Trump pulled Ratcliffe’s name in August after the uproar, then simply renominated him in February. But this time, three web pages on Ratcliffe’s House and campaign sites containing his most controversial and heavily-contested claims either vanished or were substantially altered, according to snapshots taken by the Wayback Machine reviewed by VICE News.

It’s not clear exactly when the changes were made. But they were all in place by Feb. 29 — the day after Trump renominated Ratcliffe to the country’s top intelligence position.

Ratcliffe’s congressional office didn’t immediately return a request for comment about the changes on Tuesday.

Ratcliffe’s “biography” section on his House web site was changed to back away from claims that he “put terrorists in prison” and “arrested 300 illegal aliens in a single day” while serving as a prosecutor in Texas. A review of his record last summer had raised significant doubts about both points.

“As a U.S. Attorney and federal terrorism prosecutor, Ratcliffe put terrorists in prison, arrested 300 illegal aliens in a single day, and cracked down on drug trafficking and public corruption.”

“As a U.S. Attorney, Ratcliffe served as Chief of Anti-Terrorism and National Security for the Eastern District of Texas, coordinated an operation that led to the arrest of 300 illegal aliens in a single day, and cracked down on drug trafficking and public corruption.”

Those posts referred to a decade-old case against an Islamic charity called the Holy Land Foundation, whose members were prosecuted for giving material support to the Palestinian group Hamas.

As recently as Feb 20, a press release from 2015 on Ratcliffe’s House site said he “convicted individuals funneling money to Hamas.”

A separate post on Ratcliffe’s official campaign site from 2016, which was still up as recently as November, said: “In 2008, Ratcliffe served by special appointment as the prosecutor in U.S. v. Holy Land Foundation, one of the nation’s largest terrorism financing cases.”

As of Feb. 29, both web addresses simply returned Error 404 messages, according to captures from the Wayback Machine.

Last summer, Jim Jacks, a member of the prosecution in the Holy Land Foundation case, disputed the idea that Ratcliffe prosecuted the case. Jacks told VICE News that Ratcliffe had been called in to probe a “collateral” issue that “never amounted to anything.”

“I think it’s inaccurate to say that he was ‘the’ prosecutor” in the Holy Land case,” said Jacks, whose role was affirmed in a DOJ statement announcing the verdict. “I think he would readily admit he was not the prosecutor on that case. But he did work on matters related to the case.”

Ratcliffe’s spokesperson acknowledged in an email last July that no charges ever arose from the investigation Ratcliffe led, but declined to give further details or explain the apparent discrepancy with the earlier press releases.

“A Justice Department Order appointed U.S. Attorney for the Eastern District of Texas John Ratcliffe to investigate issues related to the outcome of the Holy Land case,” the statement said. “Because that investigation did not result in any criminal charges, it would not be in accordance with Department of Justice policies to make further details public.”

Not every contested claim on Ratcliffe’s website has been tweaked. Elsewhere, under the “issues” section dealing with immigration, he’s still quoted as saying: “As a U.S. Attorney, I arrested over 300 illegal immigrants on a single day.”

The Washington Post fact-checked that one last summer and concluded, simply: “He didn’t.” Ratcliffe “played a supporting role” in that operation, the paper said.

During his Senate confirmation hearing Tuesday, Ratcliffe testified that his experience battling terrorism in Texas qualified him to oversee America’s 17 intelligence agencies as Director of National Intelligence, or DNI.

“I think the role of U.S. Attorney in particular, and my time as chief of anti-terrorism for four years, is particularly well-suited and analogous to the DNI,” Ratcliffe said. “As U.S. Attorney, I was running a federated enterprise, working across federal agencies, integrating, coordinating, sharing information, and doing so in an apolitical way. And that’s very much what the Director of National Intelligence does.”

He promised to give Trump unvarnished intelligence, regardless of what the boss wants to hear.

“I won’t shade intelligence for anyone,” Ratcliffe said.