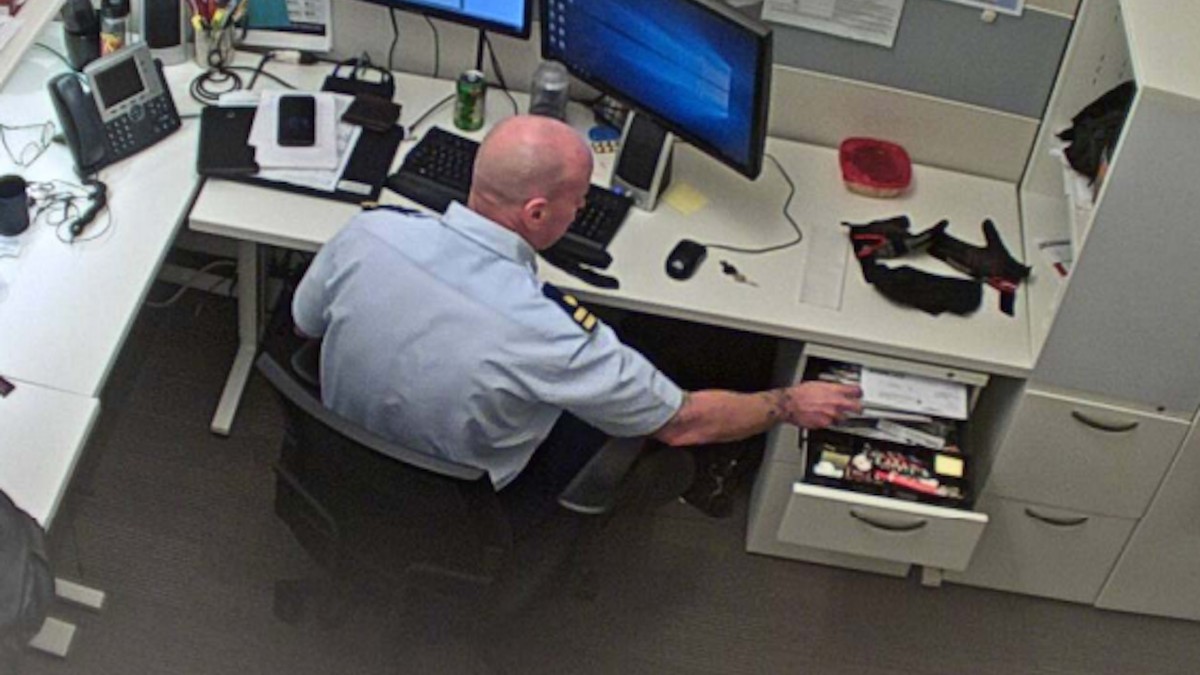 The U.S. Coast Guard lieutenant who allegedly stockpiled weapons and wanted to start a race war is set to be sentenced Friday on gun and drug charges — and he’s hoping the judge will spare him from prison altogether.

Christopher Hasson, 50, pleaded guilty in October to ordering synthetic opioids from Mexico and owning unregistered gun silencers. His lawyers say he’s just a normal guy who got mixed up with drugs and deserves a second chance.

Federal prosecutors say that Hasson, who spent more than three decades in the military, is a dangerous domestic terrorist, and on Wednesday night unsealed a trove of evidence — including chats and search history — that they say lays bare Hasson’s plan to commit an act of mass violence.

“It is not a case about a good man briefly undone by opioids and now on the right track,” the prosecutors wrote in response to Hasson’s request for leniency. “This is a case about a defendant who intended to murder.”

Prosecutors say Hasson’s search history, documented from 2016 through 2018, aligns with his expressed desire to “kill as many people as possible.” He extensively researched bomb-making manuals, sniper attacks, “killing school,” firearms and tactical gear, and downloaded the manifestos of far-right terrorists such as Anders Breivik, who killed 77 people in Norway in 2011.

The search history also reveals Hasson’s deep familiarity with the conspiracies, memes, and ideas driving the modern, global far right. For example, his most frequently visited website was the subreddit “Men Going Their Own Way” (MGTOW), an online misogynistic hub, which he visited “tens of thousands of times” between 2017 and 2019, according to a 120-page report from the Department of Homeland Security’s “Insider Threat Division.”

The report, which presents a full chronology of Hasson’s “possible extremist activity and terrorism,” conducted from his Coast Guard work station, says he also regularly searched for information about incels — the online misogynistic subculture — and visited an online forum for incels.

He also regularly researched Russian nationalist and neo-fascist writings that are regularly circulated among modern white nationalists to give their ideas a veneer of intellectualism. For example, he looked for “4th Political Theory,” the title of a book by a Kremlin-linked ideologue who hangs out with Pizzagate conspiracy theorists, appears on far-right media l like Red Ice TV, and is adored by the likes of former KKK Grand Wizard David Duke.

The Insider Threat report also included an exchange between Hasson and a colleague in which he referenced the violent white supremacist rally in Charlottesville — that culminated when a neo-Nazi drove into a crowd of protesters, killing one and injuring dozens.

“I feel like that guy at the rally,” Hasson wrote two days later. “I would just love to run over people up here.”

Hasson also extensively researched right-wing Russian battalions fighting in Ukraine, including the neo-Nazi-aligned Kornilovsky, and explored volunteer options. Since 2014, white supremacists from around the world, including the U.S., have flocked to Ukraine to volunteer on both sides of the conflict.

Prosecutors include the full text of a letter that Hasson allegedly wrote in 2017 to Harold Covington, an American neo-Nazi who was cited by Charleston church shooter Dylann Roof as an inspiration. In the letter, Hasson describes himself as a “long-time white nationalist” and aspires to establish a “white homeland.” He writes that “[redacted] has made a good many contacts of normal white people as well as the ‘alt right’ and enjoys ‘red pilling’ them to our cause.”

It’s not clear who he’s referring to, but Hasson goes on to explain that he’s reluctant to join a specific white nationalist organization because “most are infested with informants of one kind or another.”

And as prosecutors note in their memo, members of The Base, a neo-Nazi organization recently accused of plotting mass violence at a pro-gun rally in Virginia, were watching Hasson’s case closely. “They’re going to try and continue picking us off one by one until they can pass some sort of domestic terorrism designation,” wrote their leader, who was exposed last week as Rinaldo Nazzaro by the Guardian’s Jason Wilson.

But lawyers representing Hasson have described him as nothing more than a “decorated member of the U.S. Coast Guard who has dedicated his life to serving his country,” a “devoted father and husband, as well as a valued teacher and mentor to many younger servicemen.”

“Like many Americans, Mr. Hasson went through a difficult time in mid-life when he became addicted to prescription opioids,” lawyers wrote.

Prosecutors don’t buy it. “The defendant’s memo paints a relatively rosy picture of an apple-pie eating American boy who prospered in the military, only to briefly turn to entirely understandable criminal activity undertaken for innocent purposes,” they wrote. “The problem is, the defendant’s story does not survive first contact.”

They go on to highlight his tendency to engage in vandalism, theft, fighting, and affiliation with racist skinheads as a teenager and later on, after he served in the Marine Corps and before joining the National Guard.