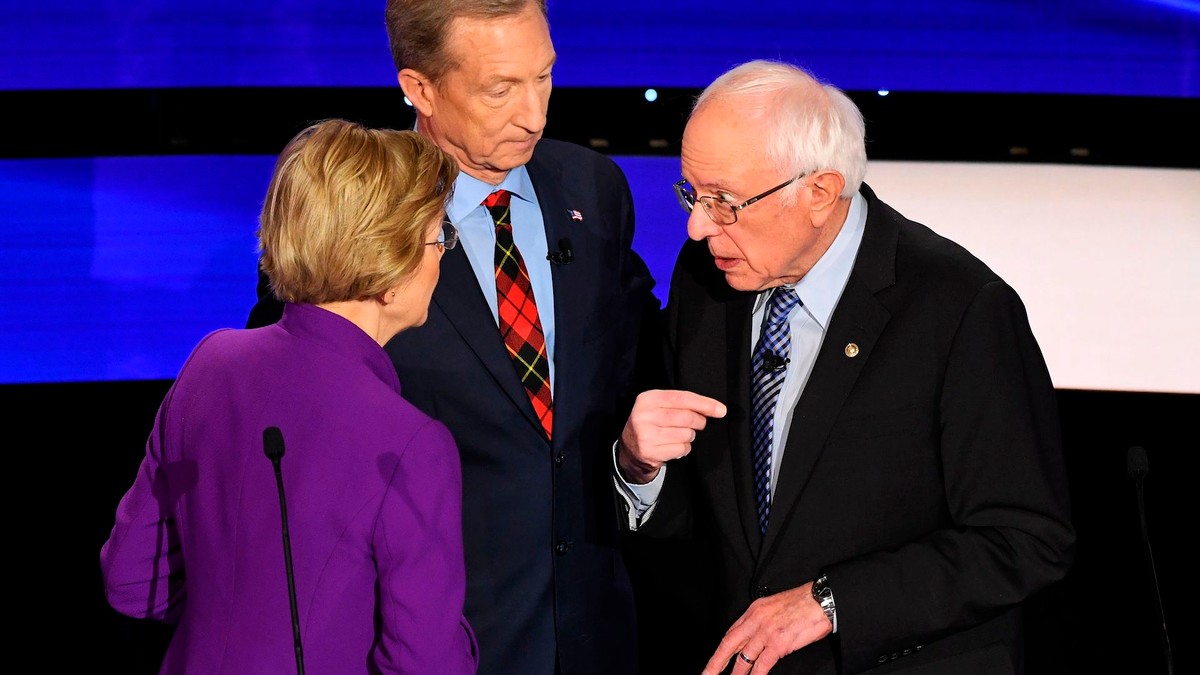 DES MOINES — Yes, Sens. Bernie Sanders and Elizabeth Warren had it out over whether Sanders told her in a private 2018 meeting that he doesn’t think a woman candidate can win, and yes, Democrats rehashed their views on Medicare for All.

But the final televised debate before the Iowa caucuses also brought substantive moments on foreign policy, trade, and climate change.

Here are some of the top moments from the seventh Democratic debate.

With President Donald Trump having taken the country to the brink of war with Iran, military action was top of mind, especially whether Democrats would use military force without Congressional approval.

Joe Biden was challenged by CNN moderator Wolf Blitzer about why the Obama administration took military action in the Middle East without Congressional approval when he was vice president.

“There was the authorization for the use of military force that was passed by the United States Congress, House, and Senate, and signed by the president. That was the authority,” Biden answered.

What was left unsaid was that authorization was passed during the Bush administration. Former South Bend Mayor Pete Buttigieg jumped in right away, saying, “That authorization needs to be replaced.”

Sen. Warren said the only term under which she’d bring the nation into combat would be an “imminent threat” — the same justification Trump has used, which relies heavily on a president’s subjective idea of the words “imminent threat.”

With Senate Majority Leader Mitch McConnell vowing to take up the U.S.-Mexico trade deal next week, trade policy made an early appearance on the debate stage. Three of the six people on the stage will have to go on the record when President Trump’s trade deal comes before the Senate.

Sanders touted his opposition to NAFTA and normalized relations with China, which he said resulted in outsourcing and job losses. He also tied together the issues of trade and climate change to explain why he’ll vote against the USMCA.

“It does not even have the phrase ‘climate change’ in it,” he said.

Biden, who supported both policies Sanders decried, tried to paint Sanders as too much of an absolutist on trade, claiming, “I don’t know that there’s any trade agreement that the senator would ever think made any sense.”

Warren and Sen. Amy Klobuchar both said they would vote for the USMCA. Warren said it makes “a modest improvement” and gives relief to farmers and workers. Klobuchar, meanwhile, said she wants to create a trade block in North America to take on China.

President Trump’s Senate impeachment trial is just days away from beginning. Yet somehow, it took a full 90 minutes before the issue came up at the debate. But the discussion didn’t exactly break new ground, even as it came one day before the Senate is expected to receive the articles of impeachment.

Klobuchar used the moment to warn the GOP not to rush through a trial without calling witnesses, describing the trial as a “decency check on our government.”