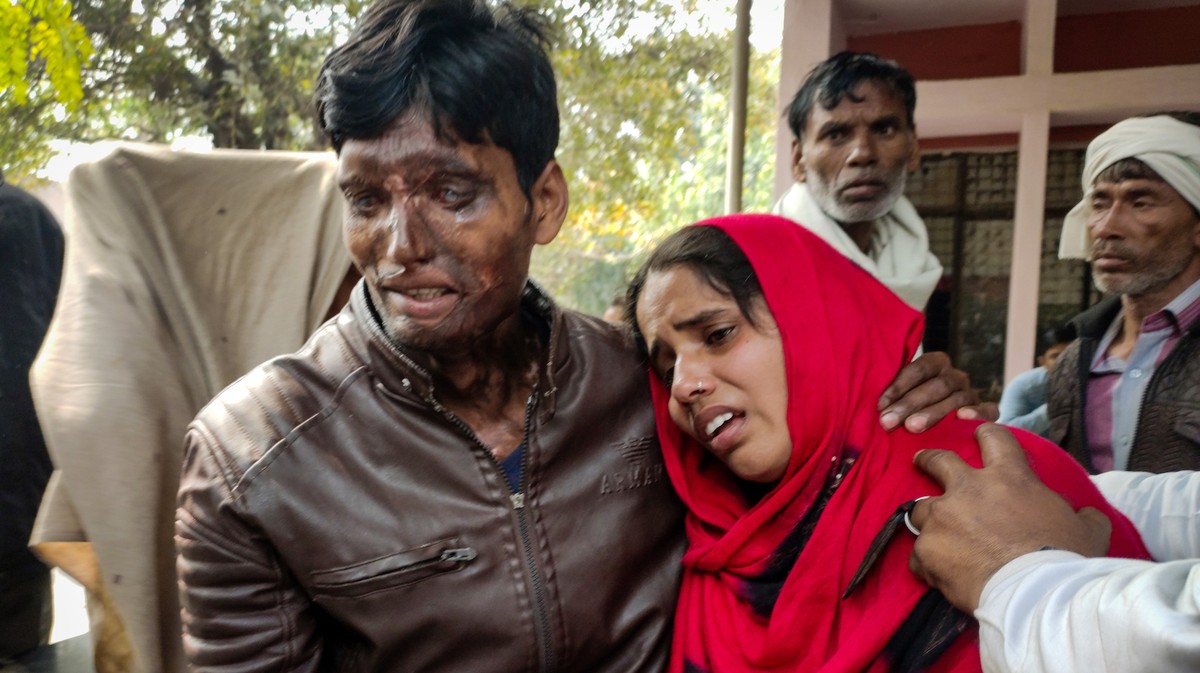 DELHI — Imran Khan was walking home from selling cloth on the streets of New Delhi when a mob of men stopped him and asked his name. As soon as he said Imran — an identifiably Muslim name — more than a dozen men began pummelling him with iron rods, hammers, and batons.

“They tied a rope around my neck and thought I was dead. Then I was thrown into the canal,” Khan told VICE News three days later from a hospital bed.

The 30-year-old father of two was less than half a mile from his home, and he stumbled there in the dark, covering his bleeding head with both hands. His wife and mother had been waiting, terrified, with his 5-year-old daughter and infant son. From their house they could hear a mob chanting Jai Shri Ram — Hail Lord Ram.

The right-wing Hindu pogroms against Muslims erupted in India’s capital city of New Delhi on February 23, after months of tension and protests over two anti-Muslim policies supported by the national government. India has a long history of tension between Muslims and Hindus, and flashes of anti-Muslim violence, but Islamophobia has been stoked by the Hindu nationalist government of Prime Minister Narendra Modi.

The attacks in Delhi started after a member of the ruling Bhartiya Janta Party (BJP) told police to clear protest sites in an area of northeast Delhi. Thousands of Muslims, mostly women, had been protesting the Citizenship Amendment Act and the National Register of Citizens. The first gives citizenship to non-Muslims from Afghanistan, Bangladesh, and Pakistan. The second, which is in use in the state of Assam and may soon go national, requires all Indians to prove their citizenship. Muslims have been disproportionately stripped of their citizenship rights through the program in Assam.

READ: Inside India’s sham tribunals that could strip millions of citizenship.

Just an hour after police were instructed to clear out the protesters, Hindu mobs took over the streets, including in Shiv Vihar. Over the next four days, they covered their faces with masks and wore helmets as they beat people to death and burnt houses, shops, schools, mosques. Some Muslims fought back.

Over four days, at least 52 people, including several Hindus, were killed, and more than 350 people injured.

Khan was attacked on February 24. He made it home to his family, but they couldn’t get him to a hospital; mobs were still roaming the streets of the neighborhood, threatening people and burning houses.

“We were stuck for two days – there was nobody to treat my wounds. My mother put cloth on my head.” They ran out of food and milk, so they moistened chapati, an Indian flatbread, with water to feed the children.

“We were so scared that they would have killed us if they had known we were inside. I forced my child not to cry by keeping him on a cloth, to swing him, play with him,” Khan said.

When they finally emerged, they saw the damage to their neighborhood. “They burnt everything — we could hear the blasts of gas cylinders,” Khan said.

Khan’s family brought him to Al Hind hospital on February 27. He was diagnosed with a concussion and skull fractures, and had deep cuts on his head and body.

The private hospital didn’t charge patients affected during the crisis, but Khan has no idea how much it will cost him to fully recover. He and his family are afraid to go home to even retrieve their belongings, and Khan won’t be able to work for the foreseeable future.

He’s still at Al Hind almost a week after the attack, sharing a bed with an injured young man. This tiny hospital, which has 15 beds and three doctors, became the only destination for the injured from all the riot-hit areas.

Dr. M. Ahtesham Anwar, who started Al Hind two years ago as a walk-in medical clinic, said more than 600 people came to the hospital with injuries in four days. Two people were dead, one shot, and another stabbed by knives.

“It was so crowded here. Body parts were lying around; some people’s hands or fingers were severed from the body. There was blood everywhere; my own clothes were drenched in blood,” Dr. Anwar said.

There were so many people that they lay scattered in an upstairs hallway, he said. The staff didn’t have enough IV stands, so they tied a rope between pillars and hung bags of fluids from it to administer to patients.