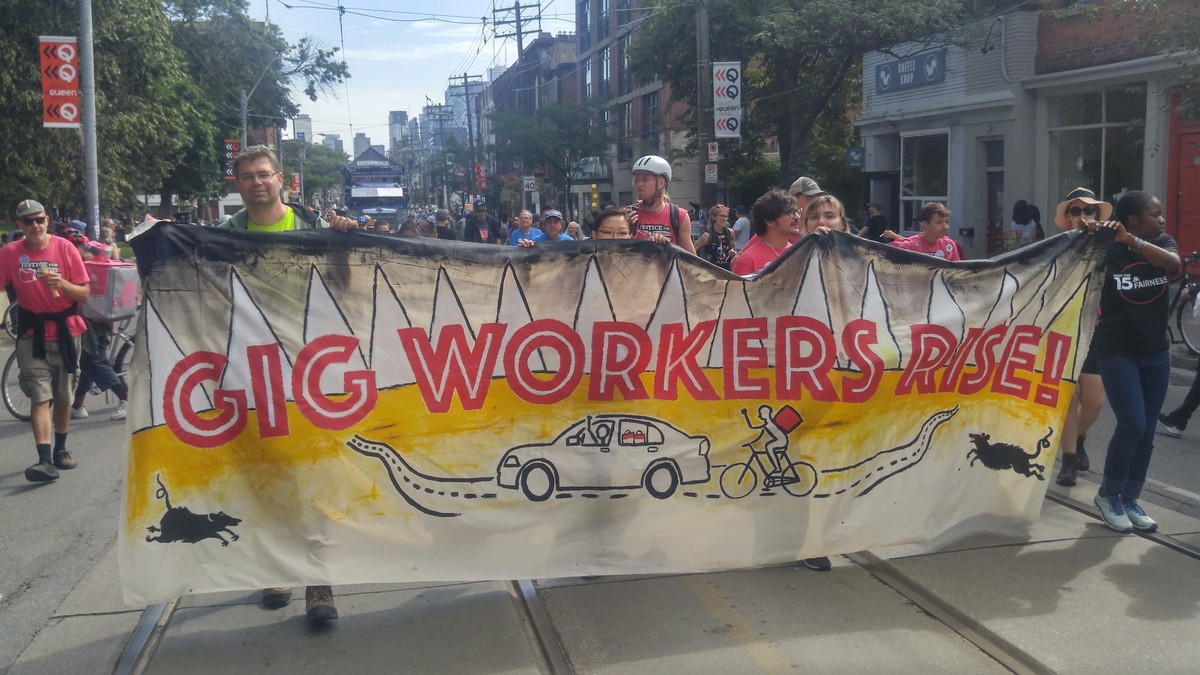 Ontario couriers for the app-based food delivery company Foodora have won the right to unionize, a ruling that could mean better protections for gig economy workers across the country and beyond.

On Tuesday, the Ontario Labour Relations Board ruled that the couriers were dependent contractors, a classification that falls in between independent contractors and employees, and as such are eligible to form a union. This is the first instance of app-based workers winning that right in Canada.

Matthew Wilson, vice-chair of the labour board, wrote in his ruling that unlike plumbers or electricians, who as independent contractors might hire their own employees to boost profitability, Foodora couriers are dependent on the employer.

“The couriers are selected by Foodora and required to deliver food on the terms and conditions determined by Foodora in accordance with Foodora’s standards,” he wrote. “In a very real sense, the couriers work for Foodora, and not themselves.”

Forming a union will help Foodora couriers negotiate better working conditions, wages, benefits and other entitlements, which are currently not guaranteed. For instance, Foodora couriers don’t have vacation or sick days, nor are they guaranteed a minimum wage.

The couriers voted back in August to certify their union, but Foodora challenged them on the grounds that they were “independent contractors” who set their own schedules, have significant control over their working conditions, and are able to subcontract duties or hire employees.

What this mean for other gig economy workers

Thomas McKechnie, a Foodora courier who started organizing his colleagues in 2018, said he was excited about the board’s ruling and proud of the collective efforts of his colleagues to reach this stage.

“The most important thing is it allows us to unionize,” he said, adding that he was confident that they have enough votes to form a union. (The ballots from the August vote have been sealed, pending this decision and other issues related to voter eligibility that will be addressed by the labour board.)

“Until the voter list is confirmed, and the unionization application votes are counted, we cannot speculate at this time as to whether the vote will sway in favour of CUPW and what this might mean for our business moving forward,” said David Albert, managing director of Foodora Canada, in a press release. “Right now, it’s business as usual.”

Although the board’s verdict is specific to the Foodora case, it sets a precedent for app-based gig economy workers across the province including Uber drivers and couriers employed by other food delivery services.

“My strongest feeling is hope and excitement for who else could take this precedent and run with it,” McKechnie said. “I feel like there’s probably lots of people out there who are in a similar condition to hold up the ruling and say, ‘I want union protection, too.’”

Uber drivers had applied in January to OLRB to unionize with the United Food and Commercial Workers (UFCW), and face the same classification test as Foodora couriers.

“Yesterday’s announcement really gives hope that by classifying them as either employees or dependent contractors, that there’s access to more rights and protections under the law that all workers should be granted,” said Pablo Godoy, UFCW national representative.

Although the ruling augurs well for gig economy workers, Larry Savage, a labour studies professor at Brock University, says forming unions in the gig economy will continue to be a challenge.

“You can rest assured that every one of the app-based employers is going to fight tooth and nail against unionization,” he said.

“This is the first hurdle. The next hurdle is probably going to be even tougher. Because employers are going to do their best to deny people their union. It’s a very common strategy,” Savage said.

Savage cited the fact that fast food workers in Ontario find it very hard to unionize despite already having the right to do so.

Godoy reckons that the board’s verdict in this case follows a pattern in other places around the world where gig economy workers have been winning important legal battles.

Uber drivers have been recognized as employees in U.K. and French courts, while recent legislation in California extends that privilege to all app-based workers.

In January, workers from 22 countries came together to form the International Convention of App-Based Transport Workers.

“In almost each of those countries we’ve had successes to some extent on taking the company to task and holding them accountable,” Godoy said.

“Ultimately, our goal is always to empower workers to take back some power in their workplace. What that looks like is ensuring that they have the tools, resources and the support necessary to take on their employer,” he said.

The Coronavirus Threat Just Got Real in Europe