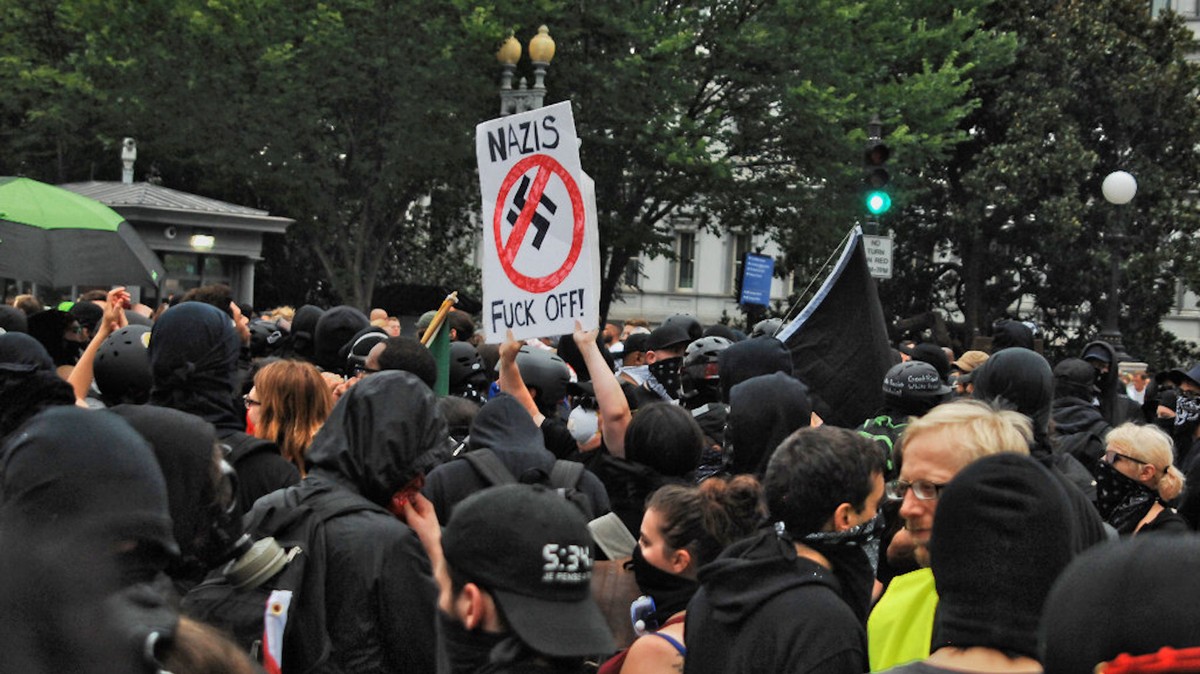 When gun lovers rally in front of the Virginia Capitol in Richmond next week, the local chapter of antifa will be there too. But their members won’t be wearing all black, and they don’t plan to douse right-wingers in milkshakes or Silly String.

Instead, local antifa will join thousands of conservatives who are expected to descend on Richmond that day in protesting pending gun-control legislation introduced by Democratic lawmakers.

Antifa Seven Hills, based in Richmond, are opposing the slew of gun bills introduced by the newly Democratic Legislature since November, because they say those types of laws are used primarily to criminalize poor people, minorities, and leftists — and to bolster law enforcement’s power.

“I think it’s been pretty important for us to focus on the fact that gun control in America has a legacy of racist enforcement,” said Antifa Seven Hills spokesperson James (who asked that his name be withheld to avoid getting doxxed online). “Like taking guns away from black people, because black people were perceived as a threat to property and the sanctity of the state.”

The local antifa chapter’s engagement in this issue is another example of the resurgence of pro-gun leftists in America and yet more evidence that the gun-rights debate is growing increasingly politically diffuse and nuanced beyond simply being a GOP issue. Under the Trump administration and in response to the emergence of an emboldened far-right movement, leftist gun groups have surged. For example, the Socialist Rifle Association was formed in 2018 and today has over 50 chapters across the country. Similarly, Redneck Revolt, a leftist gun group that formed in 2016, claims at least 45 chapters nationwide.

“This is our fight as much as anyone else’s,” James, who identifies as an anarchist, added. “It’s our state, and we are left largely out of the debate. The presence of an armed left is not discussed, it’s not understood.”

Antifa and conservative gun-rights activists would seem to be unlikely bedfellows; anyone who’s tuned into cable news in the last few years has watched scenes of political violence unfold between the hard-left and right-wingers in places like Portland, New York City, Boston, and Berkley. But in the case of Antifa Seven Hills, they believe they’ve got more in common with working-class white Virginians, regardless of their political bent, than they do with many of the moderate Democrats who helped their party win control of the Legislature in November, for the first time since 1994.

The shared skepticism of political moderates and authority is why Antifa Seven Hills sees the January 20 rally as an opportunity to extend an olive branch to other gun owners — at least those who don’t align with the far-right militias or white supremacists who are also expected to show up to the event.

READ: This conspiracy theory is firing up pro-gun activists right before their huge rally.

It’s also a reminder that “antifa” is not a monolithic movement. James said that antifa chapters tend to vary regionally in their goals, activities, and organizational structures. For example, antifascists in some parts of the U.S. have embraced “black bloc” protest tactics, which were imported from Europe and entail activists wearing all black and concealing their faces.

While that tactic is often associated with antifa in places like Portland, where antifascists sometimes show up in the hundreds to counter far-right groups, James says it’s not as well suited to the South. “I think what’s particular about the South is that we have to be a bit more creative and sensitive to the people around us — instead of fulfilling some sort of meme of what antifa is,” said James. “That’s really what we’re trying to work against right now, especially by talking to conservatives and showing we aren’t just a black-clad group of rabble-rousers who are out for attention and have jobs funded by George Soros.”

It was less than three years ago that hundreds of antifa, some in black bloc, showed up to battle white supremacists in Charlottesville, just 70 miles from Richmond. Many local residents praised antifa as heroes in the aftermath of the violent rally, where a white supremacist killed one counterprotester and injured dozens, because they believed that they intervened to drive out the white supremacists when law enforcement faltered.

But while the positive image of antifa might persist among some Charlottesville residents who had firsthand experiences of violence, it’s not the case for much of the American public. Starting from President Donald Trump’s comments after the rally, in which he laid blame on “both sides” of the conflict, antifa has been transformed into a conservative boogeyman. Conspiracy theories about Soros-funded “antifa super soldiers” plotting to behead white parents and unleash civil war on behalf of Democrats started circulating online months after Charlottesville. Some bad-faith online personalities have used selectively edited clips of protests to make claims about the growing dangers of antifa (law enforcement has not linked any deaths to antifa).

James hopes to regain control of antifascism’s image by showing ordinary Virginians that they share similar values — and thinks that Monday’s rally is a good opportunity to build those bridges.

But what was originally billed as a run-of-the-mill, open-carry, pro-gun event has snowballed into something much larger since it was organized last month — and authorities are fearing that violent right-wing extremist groups could show up and hijack the day.

On Wednesday, Gov. Ralph Northam said law enforcement had intercepted threats from armed militias similar to those in the lead-up to Charlottesville and declared a state of emergency, temporarily banning firearms from the Capitol grounds, where the rally was slated to take place. On Thursday, the FBI arrested three men suspected of belonging to a neo-Nazi group who allegedly had weapons and had discussed attending the rally.

If authorities’ fears are confirmed and white supremacist groups join the fray, Antifa Seven Hills could be left in an awkward position. Asked whether there was a plan to switch from conservative outreach into a more combative role, James declined to comment. “We’re not going to discuss our plans at this point,” he said.

Cover: Antifa in solidarity with Anti Racist activists from DC Disrupt Unite the Right and shut down portions of downtown Washington, DC on August 12, 2018. The rally, being held in Lafayette Park near White House, marks the one-year anniversary of the Charlottesville, Virginia, rally where a car driven into a crowd of counter protesters killed 32-year-old Heather Heyer. (Photo by Cory Clark/NurPhoto via Getty Images)

It’s On: Trump’s Impeachment Trial Has Officially Started in the Senate