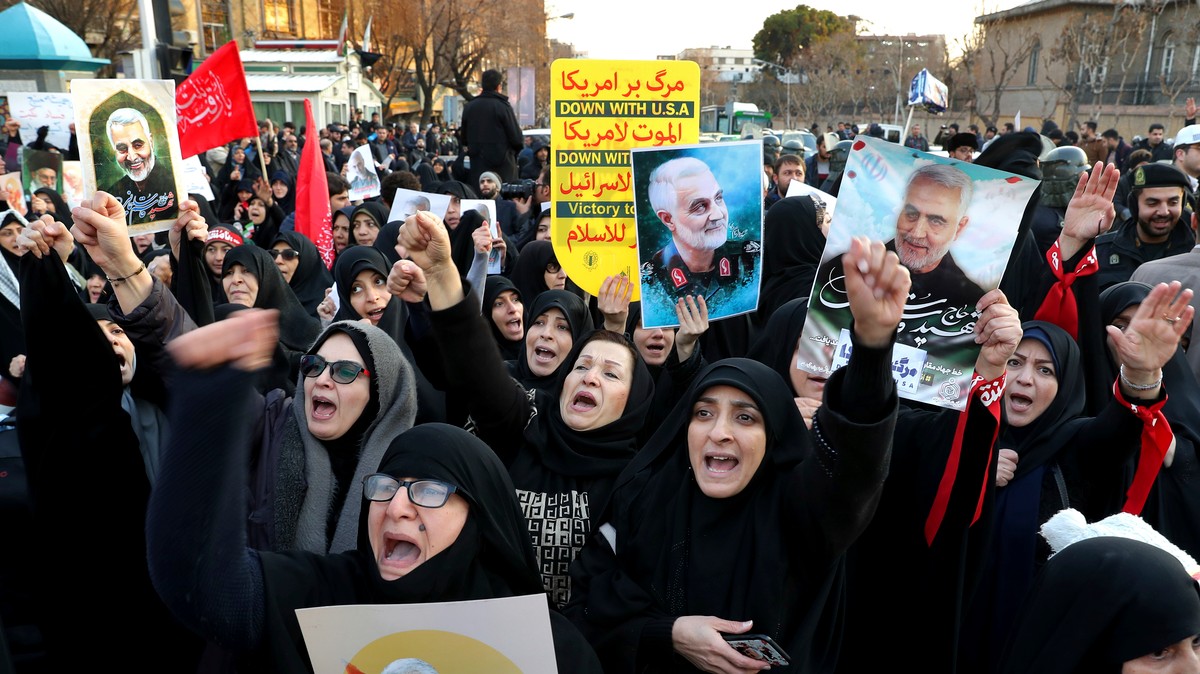 Just a week ago, Iranians appeared united by the U.S.’s killing of a top general, with more than a million mourners crowding the streets of Tehran for his funeral procession, creating a spectacle that could be seen by satellite.

But on Monday, Iranians were back in the streets — this time to vent their rage at the Iranian government, after it sensationally admitted to having accidentally shot down a passenger plane amid tensions with the U.S. last week, killing all 176 people on board.

Iran’s sudden mea culpa Saturday, following days of denials, has triggered three consecutive days of demonstrations, with protesters calling for an end to the regime as fury over the tragedy boils over. Chants of “Death to the dictator” and “Khamenei have shame, leave the country” were heard as protesters directed their anger at Supreme Leader Ayatollah Ali Khamenei, the head of the regime for three decades.

“They tell us the lie that it is America, but our enemy is right here,” shouted protesters at Tehran’s Shahid Beheshti University.

On Sunday, security forces appeared to fire live ammunition to disperse crowds in Tehran, according to footage circulated on Twitter. The clips, which VICE News was unable to independently verify, appeared to show gunshots ringing out, bleeding victims, and blood on the streets.

Riot police also used tear gas to disperse thousands of protesters in Tehran’s Azadi Square, while protests also spread outside the capital to cities including Shiraz, Hamedan, Esfahan, and Orumiyeh, according to reports.

On Monday, Iranian officials denied they had fired on protesters — just months after they killed hundreds of demonstrators in a brutal response to protests that broke out in November.

Meanwhile, officials lashed out at U.S. President Donald Trump for a Farsi-language tweet in which he pledged his support for the protesters and promised to “continue to stand” by them.


Iranian government spokesperson Ali Rabiei said Monday that Trump “was shedding crocodile tears” for the protesters, pointing out how Trump had used the same medium to threaten to bomb the country’s most important cultural sites just days earlier.

The protests were in part a response to Iran’s shock admission Saturday it had committed a “disastrous mistake” by downing the plane Wednesday, just hours after it had struck U.S. military bases in neighboring Iraq in retaliation for the U.S. drone killing of a top general, Qassem Soleimani.

“The Islamic Republic of Iran deeply regrets this disastrous mistake,” President Hassan Rouhani wrote on Twitter, vowing to prosecute those responsible. “My thoughts and prayers go to all the mourning families.”

The admission represented a sudden about-face — and an effective admission to the public that the regime had been lying for days about the cause of the disaster, as officials had publicly rubbished claims from Western intelligence agencies that the plane had been shot down by an Iranian missile. The apology from Iran’s elite Revolutionary Guards, which accepted full responsibility, also marked a rare admission of culpability from the military.

Iran’s actions drew sharp condemnation from around the world and provoked outrage at home, where the loss of so many Iranian lives was viewed as a national tragedy. Of the 176 people on board the flight, 82 were Iranian, and many others were of Iranian descent.

Trump: “Do not kill your protesters”

The protests have shattered the image of national unity that had been presented to the world when vast crowds turned out for the funeral of Soleimani. By contrast, videos circulated Sunday of Iranians tearing down posters bearing Soleimani’s image.

READ: Dozens of mourners were killed in a stampede at Soleimani’s funeral

Trump was quick to seize on the unrest as an opening to pressure the Iranian government, and began tweeting in Farsi to drive home his support for the protests.


“To the leaders of Iran — DO NOT KILL YOUR PROTESTERS,” he tweeted Sunday. “Thousands have already been killed or imprisoned by you, and the World is watching. More importantly, the USA is watching.”