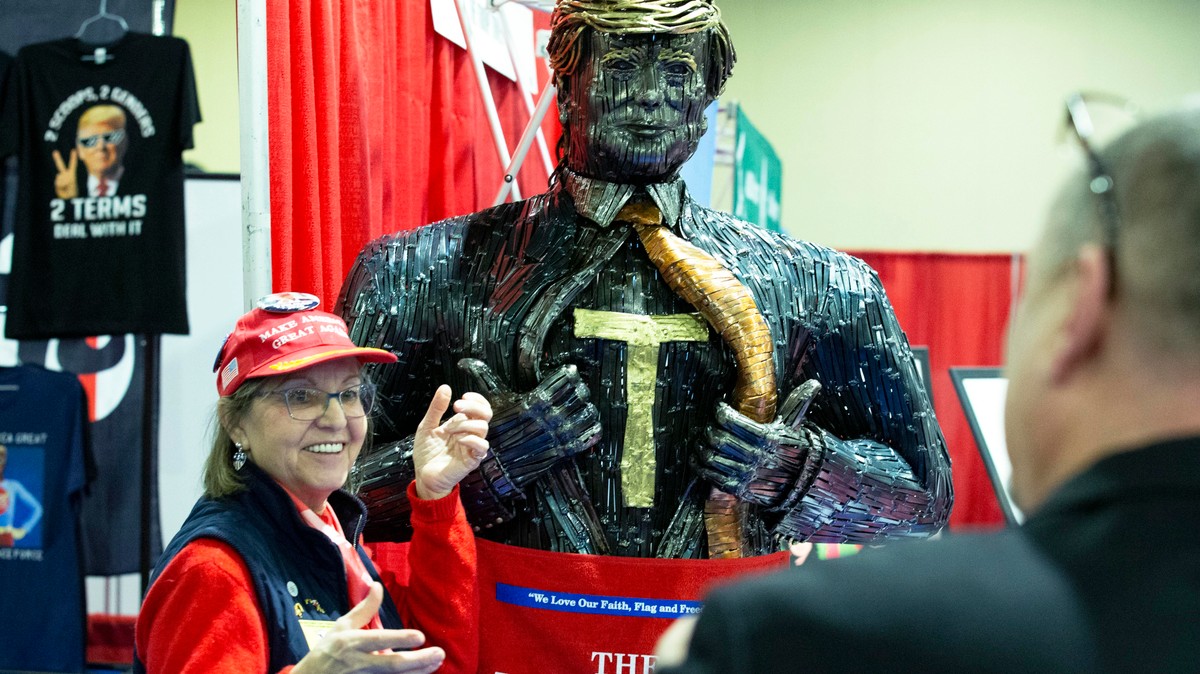 FORT WASHINGTON, Maryland — Scary myths of socialists parading around as living, breathing Democrats may be the focus of this year’s Conservative Political Action Conference (aka CPAC), but the real monster here is the mainstream media. That’s all thanks to President Trump, who’s spent years fanning the flames of conspiracy theories large and small.

The birtherism Trump peddled back when Barack Obama occupied the White House gave way to accusations of a “deep state” of unelected bureaucrats implanted inside the federal government. Conspiracies like that – and worse – are now commonplace within formerly traditional conservative circles.

But even conservatism itself seems to have been sacrificed at the altar of Trump.

“Go to hell,” Seb Gorka — a mere former deputy assistant to President Trump and alt-right provocateur — said, cutting me off as I approached. “You work for VICE? Go to hell.”

“Go to hell,” the former low-level White House official shot back from his podcast booth in the CPAC hall.

“Because we’re bad?” I replied.

“Because you’re scumbags,” Gorka yelled. “You’re not journalists, and you can quote me.”

While he doesn’t have a basic understanding of the First Amendment — which allows journalists to ask questions, just as it allows ex-White House workers with oversized egos to yell at reporters — he does have an audience for his “America First” podcast.

And he’s only one of thousands of has-beens and fringe-right pundits who’ve made their way into the mainstream. At CPAC, Gorka, along with the likes of James O’Keefe of dubious (at best) Project Veritas fame, Islamophilic British commentator Katie Hopkins, alt-right whisperer Andy Ngo, and even Diamond and Silk (I don’t know what they do, and they might not either), is a hero.

Far-right conservatism – from radical to insanely conspiratorial – now counts as the mainstream of GOP politics. That includes the president himself, along with some of the top advisers he’s poached from Fox News and even Breitbart, who have echoed and amplified Trump’s signature “fake news” soundbite. His meme-driven politics, though routinely mocked by comedians, pundits, and even journalists, are now mimicked by a fleet of conservatives who are more trusted by hundreds of thousands of Americans than the nation’s traditional journalists.

That’s why, to a lot of Republicans, the press is now the enemy, or at least not to be believed.

“I think everybody’s seeing it now,” according to Ben Bergquam, whose social media posts go out under the banner of America’s Voice News (I had to look it up: They boast about making the internet interactive for their conservative hosts). He’s a self-described “social conservative” who says he believes “abortion is murder, homosexuality is sin, and transgenderism is insane.” And he says his viewership has gone up under Trump.

A supporter of President Trump poses for a photo next to a figure during Conservative Political Action Conference, CPAC 2020, at the National Harbor, in Oxon Hill, Md., Thursday, Feb. 27, 2020. (AP Photo/Jose Luis Magana)

“You can’t deny the fact that there is a paradigm shift, not just in media but also in culture in America,” Bergquam said. “Conservatives used to always accept the idea that we had to compromise. And now we say, ‘No, we can win.’”

“Conservatives used to always accept the idea that we had to compromise. And now we say, ‘No, we can win.’”

But being king of the Hill isn’t easy. So now Trump’s even drawing criticism from some of those fringe-right pundits who enabled his stealthy rise.

“Trump knew on Day One the power of the grassroots – the power of populism,” Alex Jones of conspiracy theory-peddling InfoWars, told VICE News while surrounded by an entourage. “They certainly know that grassroots media is where the real power is, but I think they knew the power of it four years ago.”

Jones is still fully in Trump’s corner, but he says the president has lost his bearings now that he’s in the White House. He says Trump owes his former political allies a lifeline that only the president of the United States can throw.

“Trump’s biggest failing is that he told Julian Assange – or whoever had the WikiLeaks, to release it, and now he hasn’t gotten Julian Assange out of prison,” Jones said. “I feel like that I’ve been gang-raped by the fact that he’s not stood up for Julian Assange. He’s not stood up yet for General Flynn. He better pardon Roger Stone. I mean, these are political prisoners.”

But even Alex Jones is fringe at CPAC — at least for now, because the gathering continues to move rightward, along with Trump and GOP lawmakers who’ve sipped his Kool-Aid. To most Republicans, the media gave the Obama administration a pass, and it’s time for revenge.

“There was no middle ground, and then you had a candidate that understood the media, and he called it out. So he brought the attention to the media,” Rep. Paul Gosar (R-Ariz.) – a member of the House Freedom Caucus known for extreme views — told VICE News of Trump. “That’s the difference: Somebody had a spine to actually call it out.”

“There was no middle ground, and then you had a candidate that understood the media, and he called it out.”

The congressman says he mostly won’t even do interviews with his largest local publication, the Arizona Republic.

“When they want a request, I don’t really honor it. I’ll do something for Cronkite News,” Gosar said of Arizona’s PBS station.

On Thursday at CPAC, Gosar also did interviews with Epoch Times (a fringe-right rag read by millions), Town Hall (a conservative publication owned by the right-wing radio broadcaster Salem Media), and Daily Signal (the Heritage Foundation’s “news” site). And while Gosar was mic-hopping, other conservative lawmakers were likewise bypassing much of the mainstream — or as they say, “lamestream” — media.

“We’ve just tried to go around them because – and I hate to say this – but who’s reading the newspaper anymore?” Perry continued. “As long as, unfortunately, as news can’t be relied upon to be factual, the spectrum is going to be wide open. Right? We’re going to shop for our news either what we believe in or think or we’re going to multi-source it and try and figure out where the truth is between the two or the 10, whatever.”