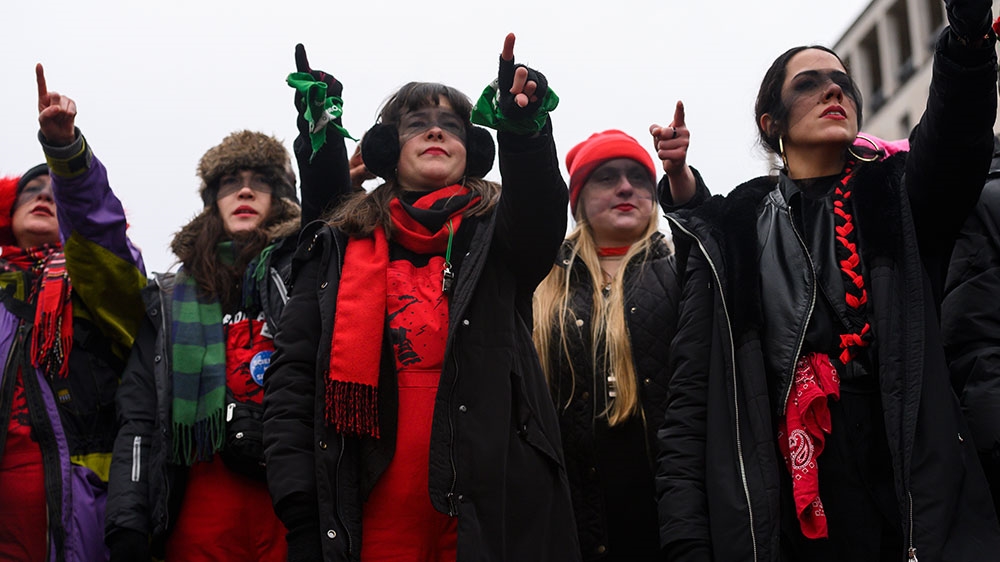 Washington, DC – Pointing at the United States White House on Saturday, women and their supporters chanted “the oppressive state is a rapist. The rapist is you.”
The lyrics are part of a Chilean performance piece that has become an anthem of the feminist movement worldwide.
“Patriarchy is a judge, that judges us for being born, and our punishment is the violence you don’t see,” the group, led by members of Chile’s Las Tesis feminist collective, yelled in unison as protesters came to a halt along a route that nearly circled the White House.
More:

Chile’s ‘A rapist in your path’ chant hits 200 cities: Map

The performance offered a defiant, powerful tone to the fourth annual Women’s March, which saw thousands from across the country and world brave light snow and freezing rain to march in Washington, DC. Thousands of others rallied in cities and countries worldwide.
“I want everyone to know that women deserve rights too,” said Mariam Meite, who travelled from North Carolina for the Washington, DC, march.
“We’re not making this stuff up,” the 21-year-old told Al Jazeera. “We’re actually being assaulted every day. We’re not getting paid equally. We’re dying all the time. We deserve to be heard.”

Our sisters from Chile,@lastesisoficial, led us in the powerful and cathartic mantra, “El Violador En Tu Camino” outside the a White House. Naming the predator. Blaming the system. Salt the earth. Video by @vsancho #LasTesis #WomensMarch2020 pic.twitter.com/KneVFMu2Ka
— Sarah Sophie Flicker (@sarahsophief) January 18, 2020

Protesters held signs that included a variety of demands from climate action to reproductive rights.
“My particular concern is the planet, climate and how [President Donald] Trump and his cronies and his associates are doing everything wrong,” said Laura, who wished to only give her first name.
“They aren’t concerned, it seems, with the survival of the planet and the people,” the 67-year-old from Pennsylvania told Al Jazeera. “Hopefully we have not gone so far that our planet is doomed.”

Bailey Nickoloff, a 26-year-old law student in Washington, DC, said she also attended the march to call for climate action, as well as to demand respect for Indigenous rights and to take a stand against Trump.
“I’m here for a lot of reasons,” said Nickoloff, who is originally from Montana.
“To garner awareness and remind myself that we’re not alone in this,” she told Al Jazeera. “And I’m here to get Trump out of office. We’re all here to accomplish that.”
Trump and the November presidential election were at the forefront of many of the protesters’ minds on Saturday, with several carrying signs that read, “Trump out now” and “kick them out when they abuse our trust.”
The first vote of the primary and caucus season will take place on February 3 in Iowa.

The march also came as the US Senate prepares to hear opening arguments in the impeachment trial of Trump. The House of Representatives charged Trump with abuse of power related to his dealings with Ukraine and obstruction of Congress for refusing to participate in the impeachment investigation. Trump has denied any wrongdoing, labelling the impeachment a “hoax”.
“I really hope everyone here ends up voting and changing who is in office,” said 21-year-old North Carolina native Taylor Wells-Tucker.
‘Unspoken problems we need to face’
This year’s Washington, DC, march was relatively small compared with the first Women’s March in 2017, which brought hundreds of thousands to the country’s capital. Some pointed to the struggles the movement has faced over the last three years, including accusations of exclusivity and anti-Semitism, as well as internal issues that led to a change to the march’s leadership last year.
“I think this movement needs to be geared towards more people of colour,” said Andrea, who wished to only give her first name.
“There are unspoken problems and issues that we all need to face and talk about and try to reach out to more communities that aren’t as represented here,” the 20-year-old from Maryland told Al Jazeera, noting that the majority of those who attended Saturday’s march were white.

Thousands of people participate in the Fourth Annual Women’s March at Freedom Plaza in Washington, DC [Michael A McCoy/Reuters]

Others, including Sydney Stephens, a 20-year-old Howard University student, felt like some may have been discouraged by the years of attacks on women since Trump took office.
“People get tired of being activists,” Stephens said.
“People are tired and think change isn’t going to happen,” she told Al Jazeera.
But for Stephens herself, hope is the thing that continues to motivate her to take to the streets.
“You have nothing if you don’t have hope,” she said. “You have to have hope and push through.”
Continue Reading…