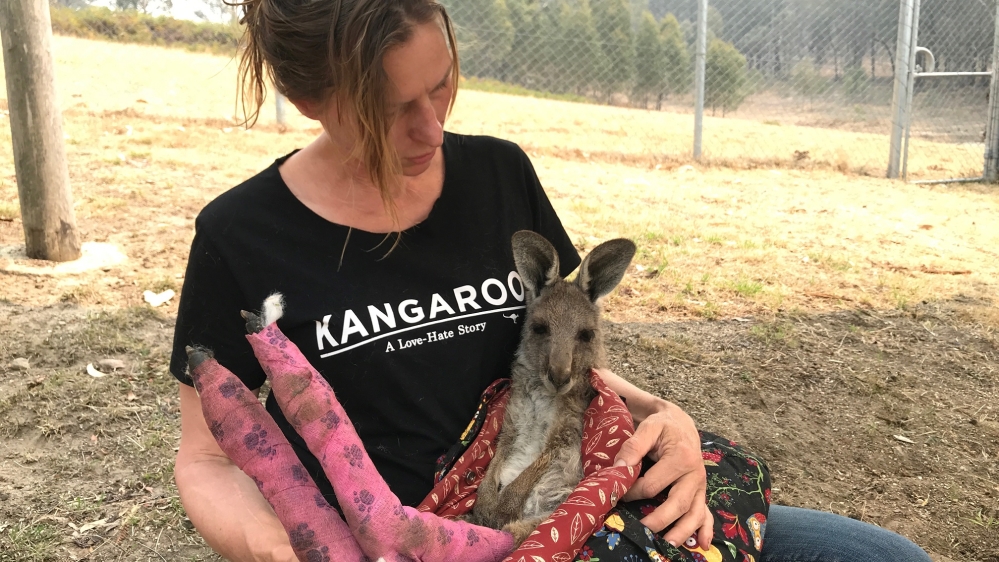 Sydney, Australia – Vickii Lett has been a volunteer wildlife carer in New South Wales (NSW) for 32 years.
While she says her work can sometimes be heartbreaking, this year she has witnessed Australia’s wildlife being wiped out on an unprecedented scale by fires that continue to rage across the country.
“The scope of these fires is something we’ve never experienced before,” said Lett, whose work with the Australian wildlife rescue group, WIRES, often involves searching for survivors amid the ashes.

“It’s heartbreaking to see those injured animals. Many of them have to be destroyed, others, maybe you see the shell of a body but it’s basically just a shape in the ash.”
Since country-wide fires first flared up unseasonably early in September, hundreds of homes have been lost, more than five million hectares (12.4 million acres) of bush and farmland have been scorched, and at least 24 people have been killed.
Ecologists from the University of Sydney estimate almost half a billion mammals, birds and reptiles have died since the fires began.
As another heatwave sweeps across the country, the fires are showing no sign of abating and experts fear there may not be enough habitat or numbers left for some species to recover.

Disappearing habitats
The animals Lett cares for include koalas, wallabies, kangaroos and various species of possums.
While rehabilitation can take months, releasing them back into their natural habitat requires that habitat to exist.
Right now it is burning, Lett said, and with the scale of this year’s fires, it is unclear how long it will take to rejuvenate and for release to be possible.
The fires have also caused a drop in bird, rodent and insect populations.
“When that happens, then, of course, that’s going to affect the larger ecosystem, because that’s the building blocks for a whole community,” Lett told Al Jazeera, adding that everything has a role in nature from breaking things down, being eaten by other animals, or spreading seeds.
“We just cannot minimise the effects of losing those smaller species.”

Bats are also in danger, not only from fires and habitat loss, but soaring temperatures.
WIRES Flying Fox coordinator Storm Standford estimated that about 50 percent of this year’s infant grey-headed flying foxes have died.
“For the past six weeks, what we’re seeing is mass abandonment of young, and that’s odd,” Standford told Al Jazeera, as two baby flying foxes grappled noisily for her attention. “Ecologically it’s really not clear what is going on for them.”
In some areas, wildlife carers are seeing an increase of up to 200 or 300 percent of dead or abandoned infants, Standford said.
The grey-headed flying fox is listed as a threatened species by the Australian government.
As long-distance pollinators that carry seeds across the landscape, they are crucial for the survival and regeneration of native forests.
‘All-consuming and continuous’
While fires are a frequent occurrence in many areas of the country, this year the fires are hotter, more frequent and sweeping through areas that do not normally burn.

Ecologists from the University of Sydney estimate almost half a billion mammals, birds and reptiles have been lost since the fires began. This brushtail possum was rescued by WIRES in the Blue Mountains. [Jill Gralow/Reuters]

Michael Clarke is a Professor of Zoology at La Trobe University’s Centre for Future Landscapes.
He said that while some Australian habitats have evolved to cope with fire, others evolved to resist it.
The areas that do not normally burn provide refuge to animals from which they can “recolonise the landscape”, he said.
“Both the scale and the severity of the fires is changing before our eyes,” Clarke told Al Jazeera. “It’s all-consuming and continuous … the refuges [wildlife] rely on are being burnt as we speak.”

Clarke said droughts leading up to this season were part of the problem.
Rainforest gullies and mountain tops are normally damp and wet enough to resist the flames, resulting in a “patchy fire” with untouched areas that animals can take shelter in.
But this season those landscapes are much drier.
“[The fire] is going right through those damp gullies as if they didn’t exist,” he said.
“These habitats that only exist in the absence of fire are going to be changed almost irreversibly by the presence of fire.”
Animals that live in these areas, including pygmy possums, gliders and many bird species, will be most vulnerable, he said.
Clarke has spent the last 15 years studying fire ecology, fire management and the rates at which different habitats recover from fire, but the effects of climate change mean “the game is changing right in front of us”.

An exhausted wombat was found hiding in its burrow as fire and heat raged in Australia [File: Supplied by Lucille Hoy for Al Jazeera]

“We’re really entering uncharted waters. As an ecologist, that’s the really disturbing part,” he said.
But Clarke said sadly, this is exactly what climate scientists have been predicting for years.
Volunteers provide crucial water stations
While the situation is dire, many Australians are working hard to ensure the animals that do not burn have the means to survive.
Fires began burning in Lucille Hoy’s region at the end of October, but in the week before Christmas, the flames reached the national park that borders her home town of Lithgow.
The Pilates instructor told Al Jazeera that not only were hundreds of animals dying in the flames, but those who managed to survive were dehydrated and starving, their vegetation wiped out.
Within days of connecting with local wildlife groups and posting an appeal on Facebook, her home became a supply hub.

Animal rescuer Lucille Hoy, left, with Glen Day, an elderly man who lost his home in the fires. Lucille found him living in a broken-down old caravan with his cats. They got some burns, but he managed to save them [Supplied by Lucille Hoy for Al Jazeera]

Hoy began receiving deliveries of hundreds of kilogrammes of wildlife pellets as well as medical supplies – particularly for burns – as well as water containers.
“We’re not supposed to feed our wildlife, but in a crisis event like this we have to feed them,” she said. “They are living on ashes. Everything is dead.”
On Christmas Day, rather than celebrating with family and friends, Hoy was driving around in the heat and dust searching for wildlife trails on which to set up food and water stations.
But in many areas, water pipes have melted, so providing water can mean shipping it in from the town.
She described how a mother kangaroo and joey were found trying to drink from a birdbath.
Hoy said many locals were starting to help with distribution, but with the scale of the destruction, the need was likely to continue long after the fires had burned out.
Continue Reading…